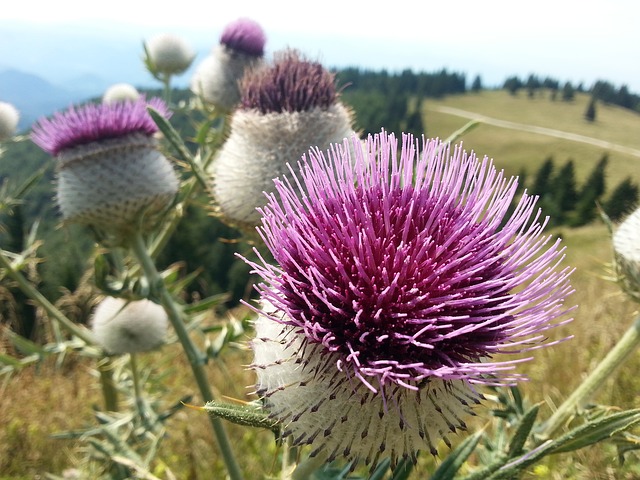 How to Love Thistles When You’ve Been Hurt Before

Thistles are a much maligned plant. In many areas they are listed as noxious weeds, and you may even be legally required to eradicate them from your property. Why all this thistle hate? Sure, they’re armored up and ready for battle (ask a Scottish history buff about that)—but they’re also beautiful, resilient, and a food source for many butterflies. Plus, they’re delicious and have some rather handy medicinal properties. Read on and I’ll help you rejoice, rather than cringe, at the sight of a thistle. 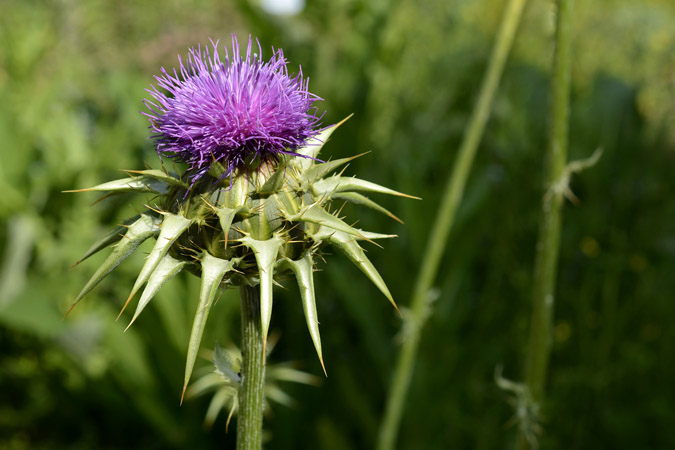 All thistles in the Cirsium and Carduus genera are edible, as well as many members of other thistle genera.1)Deane. “Thistle: It’s That Spine of Year.” Eat The Weeds and Other Things, Too. September 16, 2017. Accessed October 03, 2018. http://www.eattheweeds.com/thistle-touch-me-not-but-add-butter-2/. Technically, all parts of these thistles are edible. However, anyone who has ever been stuck by a mature thistle will tell you differently. The mature spines are definitely not something you want to consume. Cooking will not soften them. If you have a very good blender, you might be able to dry and powder them. I don’t trust my blender quite that much.

It’s far easier to cut away the spines and eat the midrib of mature leaves. Or better yet, eat the young leaves. The young plants are much friendlier and usually have a milder flavor. 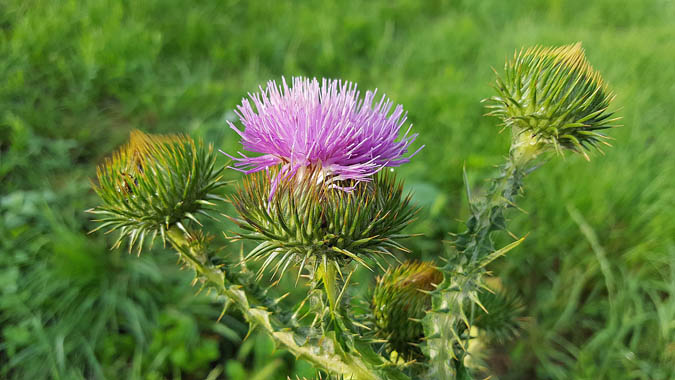 For the brave, mature plants offer two more excellent food options: stalks and seeds. The stalks are wonderful and are probably the easiest part to harvest on a mature plant. You should wear thick gloves. (I don’t. But, hopefully, you’ll be smarter than me.) Use a large knife or machete to cut away the leaves. The longer the blade, the more effectively it keeps you away from those formidable spines.

As a teenager, I gathered a small collection of swords from flea markets and yard sales. They make excellent tools for slaying thistle dragons (as well as encouraging imaginative harvesting), though I may have earned a few quizzical looks from passersby. 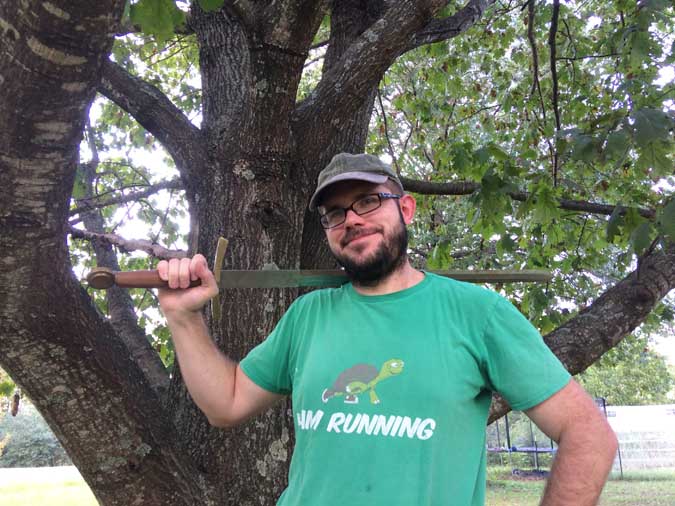 Me with my trusty sword, Thistle Cleaver

Side Note: Don’t try this on public land or you may get into trouble with the law. For some reason, people get nervous when they see someone carrying a sword in public. Weird, right? My friends and I have the standard excuse of “we’re rehearsing for a play.” (That’s not legal advice, by the way.)

Once defoliated, the naked stalk can be handled quite safely. Peel the outside to reveal some prime veggie goodness . . . usually. Not all thistles are delicious, though they are all edible. Sample a bit of the plant before you start hacking at it. It would be a shame to slash up a perfectly good thistle and not eat it.

You Might Also Enjoy: “Top 10 Most Dangerous Plant Look-alikes”

You can eat thistle stalks raw, steamed, or boiled. Younger stalks are usually better. The older ones can develop a funky taste, depending on the species, and can become too tough to be worthwhile. Though, occasionally, you will find a real trophy thistle that’s both huge and delicious.

Another side note: Someday I’m going to discover a way to mount plants on my wall the way other people do with deer heads. Then I’ll invite people over to see my trophy room and say, “That’s a twelve-point thistle right there. I saw it out in the garden at sunrise while I was drinking my morning coffee. So I got my long sword out and crept up on it real stealthy-like. But it must’ve seen me coming, because it fought back for all it was worth. Let me show you the scar.” And that’s a good illustration of why I so rarely have visitors. 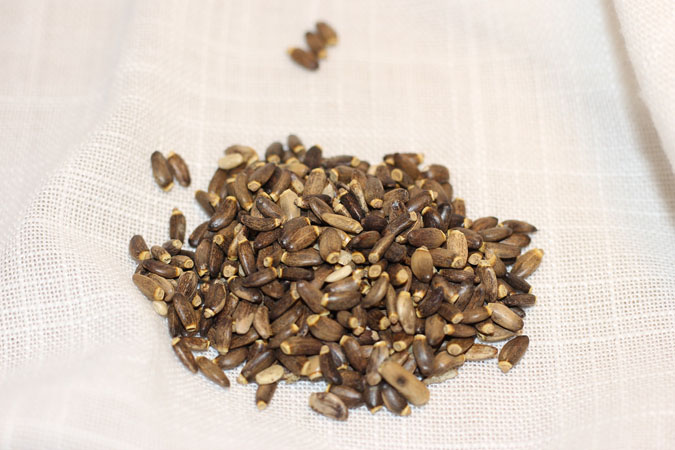 The seeds can be crushed and added to drinks, breads, soups, or stews. Thistle seed tea is probably more common, though it’s more often used medicinally than for pleasure. I’ll get to that in the next section. Seeds can best be extracted with a pair of needle-nosed pliers and a spoon. Cut off the dried thistle flowers, use the pliers to hold them by the stem, and use the spoon to scoop out the seeds into a container. You’ll also want to pick off the fluff.

The root is also edible, though I’ve never gotten around to eating one. Perhaps that’s because swords are more fun than shovels. I guess I should put it on my “to eat” list for next year.

The most well-researched thistle, in regards to medicine, is the milk thistle (Silybum marianum). For that reason, I will only be referring to this species here. However, other thistle species likely have some degree of overlap in effect. For example, holy thistle (Cnicus benedictus) also has a beneficial effect on the liver, though it is less potent than milk thistle.2)Chevallier, Andrew. Encyclopedia of Herbal Medicine. London: DK/Penguin Random House, 2016. 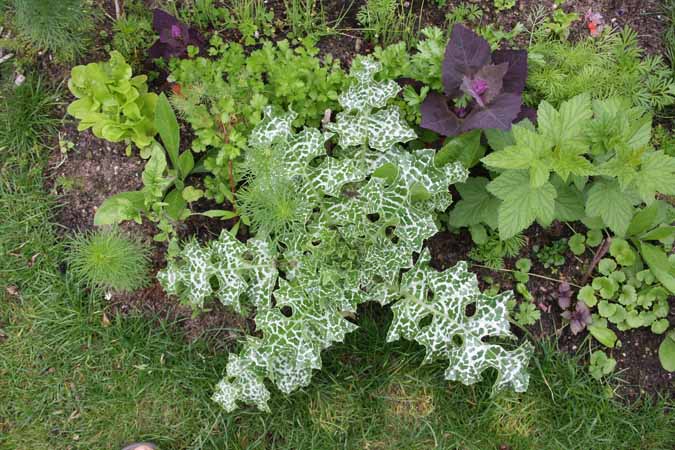 Milk Thistle: Note the milky white pattern on the leaves.

Though it possesses a number of medicinal benefits, milk thistle is best known for its liver-related effects. Milk thistle is a rock star in this regard. Its best-known effect is that it protects the liver from the toxic consequences of certain mushrooms, such as the death cap mushroom (Amanita phalloides).3)Bone, Kerry, and Simon Y. Mills. Principles and Practice of Phytotherapy. Churchill Livingstone, 2013. 4)Chevallier, Andrew. Encyclopedia of Herbal Medicine. London: DK/Penguin Random House, 2016. 5)Floersheim, G. L., A. Bieri, R. Koenig, and A. Pletscher. “Protection AgainstAmanita Phalloides by the Iridoid Glycoside Mixture OfPicrorhiza Kurroa (kutkin).” Agents and Actions29, no. 3-4 (1990): 386-87. doi:10.1007/bf01966472. 6)Hruby, K., G. Csomos, M. Fuhrmann, and H. Thaler. “Chemotherapy of Amanita Phalloides Poisoning with Intravenous Silibinin.” Human Toxicology2, no. 2 (1983): 183-95. doi:10.1177/096032718300200203. 7)Foster, Steven, James A. Duke, and Steven Foster. A Field Guide to Medicinal Plants and Herbs of Eastern and Central North America. Boston: Houghton Mifflin, 2000. But it also has a protective effect against a wide number of toxins, pharmaceuticals, and heavy metals.8)Bone, Kerry, and Simon Y. Mills. Principles and Practice of Phytotherapy. Churchill Livingstone, 2013. This also reduces stress on the liver to aid in healing, and can stimulate healing of the liver at 4 times the normal speed.9)Hoffmann, David.Medical Herbalism the Science and Practice of Herbal Medicine. Rochester, VT: Healing Arts Press, 2003. 10)Lucena, M.i., R.j. Andrade, J.p. De La Cruz, M. Rodriguez-Mendizabal, E. Blanco, and F. Sánchez De La Cuesta. “Effects of Silymarin MZ-80 on Oxidative Stress in Patients with Alcoholic Cirrhosis.” Int. Journal of Clinical Pharmacology and Therapeutics 40, no. 01 (2002): 2-8. doi:10.5414/cpp40002.

How Much Should You Take?

In Herbal Antibiotics, Stephen Buhner recommends 30-60 drops of milk thistle tincture, up to 5 times a day, at minimum. Or 1-2 teaspoons of crushed seeds 3 times a day, in the case of liver disease.31)Buhner, Stephen Harrod. Herbal Antibiotics Natural Alternatives for Treating Drug-resistant Bacteria. North Adams, MA: Storey Pub., 2012. However, he notes that larger doses may be used.

Thistles as a Conversation Starter

Where do you stand on the topic of thistles? Do you love them or hate them? Or do you love them from afar? Maybe you love thistles, but have a hard time loving another weed. (Mine is grass). Let me know all about it in the comments!