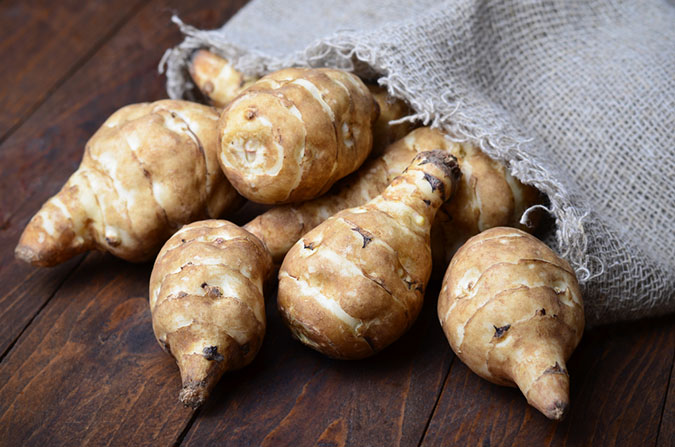 How to Find and Eat Jerusalem Artichokes—Fall’s Wild Food

Jerusalem artichoke, commonly known as sunchoke, is a late fall food with edible tubers that look like ginger and taste like potatoes. 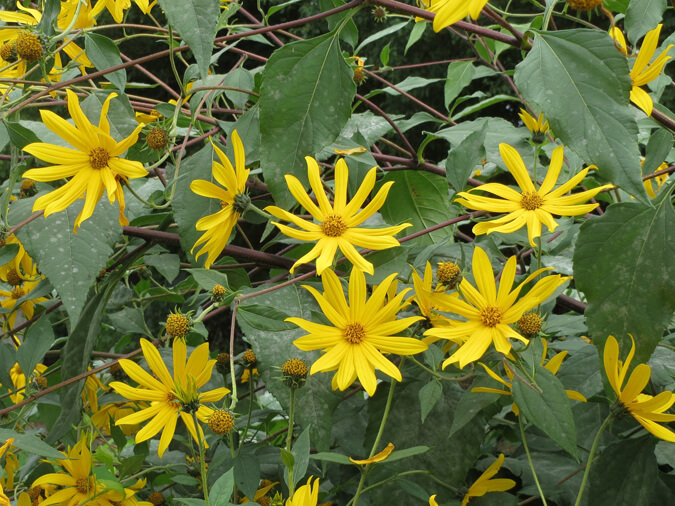 Fall may be a time when wild edibles become scarce, but there’s still one big harvest I look forward to every year: Jerusalem artichokes. They aren’t from Jerusalem, aren’t artichokes, look similar to sunflowers, and have edible tubers that look like ginger and taste like a potato. They’re a bit like the plant version of a duckbilled platypus. Intrigued yet? Read on.

Why Is It Called ‘Jerusalem Artichoke’?

Jerusalem artichoke’s current name is a corruption of the original name, girasole, which means “turning toward the sun.” Think “gear” and “solar.” Anyway, it’s easy enough to imagine the path from one name to the other. The “artichoke” part comes from the taste. I don’t see the resemblance, myself, but maybe I’m the weird one.

Personally, I prefer to call them sunchokes. You can sometimes buy them in grocery stores under this name. Other names you might come across include sun root, earth apple, and occasionally the nickname “Jerusalem fartichoke.” More on that later.

Jerusalem artichoke is in the Asteraceae family. I mentioned above that it looks very similar to a wild sunflower. There’s a good reason for that. It is one. More specifically, it’s a particular species of wild, perennial sunflower (Helianthus tuberosus).

Look for stalks 3-10 feet (1-3 meters) tall with branching stems and many yellow, disk flowers, 3-4 inches (8-10 centimeters) wide. Disk flowers look like large, single flowers, but are actually made up of many smaller flowers clustered together. Each “petal” around the edge is also an individual flower whose petals have been fused together and grow at one side to give the illusion of a single large petal. 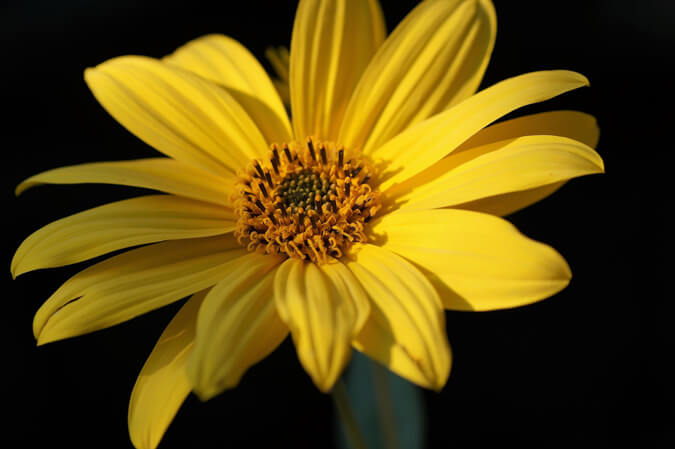 The stems and leaves are rough, like course sandpaper. The leaves are fairly oval, thicker below the midpoint, and 5-10 inches (12-25 centimeters) long.

While you can differentiate Helianthus tuberosus from other sunflowers with just the aboveground parts, the easiest thing to do is to wait until late fall. Then dig up the root and look for tubers. If you find tubers (about the size of an egg, varying a bit with growing conditions), you’ve found a Jerusalem artichoke. By the way, it has to be late fall. They form the tubers to make it through the winter. If you go around digging them up in summer, you’re going to be disappointed. 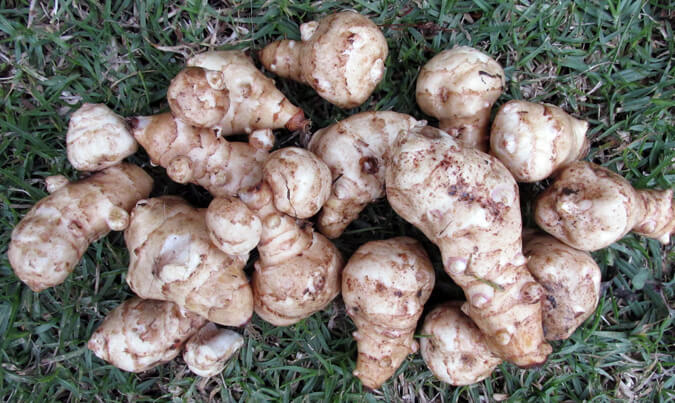 How to Find and Grow Jerusalem Artichokes

Jerusalem artichokes don’t really care what kind of soil they’re in as long as they get an occasional drink of water and some sunlight. I’ve seen them in full sun to fairly heavy shade (though these didn’t look nearly as happy). They just want to live and spread … and spread … and spread.

“Zone-Pushing Tips for Growing Ginger and Turmeric in Cold Climates”

“[VIDEO] How To Make Fire Cider”

Jerusalem artichokes are native to North America. They can be found in almost every state and much of Canada, but become more scarce as you move into drier regions. They’ve also found their way to Europe and have become invasive there. As something of a gourmet food, Jerusalem artichokes have been, and are being, grown in many places around the world. So if you don’t have them now, expect them in the future. 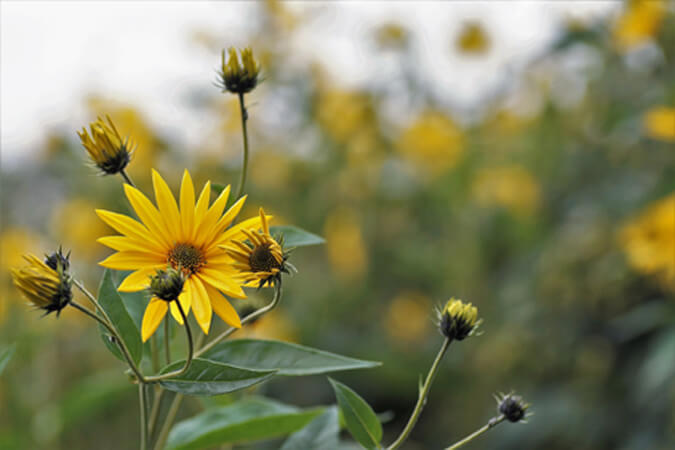 But if you can’t wait for that, you should consider growing them yourself. I’m a much better forager than I am a gardener. But cultivated varieties of Jerusalem artichokes retain their wild self-sufficiency and resilience, while gaining the benefit of a much larger tuber. I threw some into the ground a few years ago and I only go back to harvest them. No watering. No weeding. Just me unearthing bucketful after bucketful like I’m David the Good or Tasha Greer. Just be sure to put them where you want them, because you’ll never weed them all out and they’re going to spread. 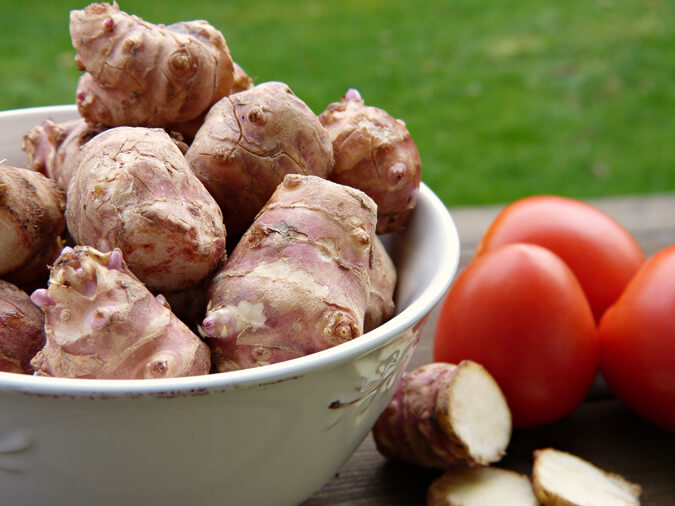 They make a great plant for a children’s garden. All the kids have to do is the initial planting and the harvesting. My kids love going out to dig up a few for snacks or supper. Our sunchoke “grove” is so large and thick that this year we cut a path into it and hollowed out a spot for them to have a secret hideout. Plus, they can sword fight with the dead stalks, then use them to practice building fires in the fireplace (under supervision).

How to Prepare and Eat Jerusalem Artichokes

Jerusalem artichokes don’t store well out of the soil. You can keep them in a sealed container in your refrigerator for several days, if you put a wet rag in with them to prevent moisture loss. For longer storage, you can place them in a cool location, in a bucket filled with dirt. Or just leave them in the ground until you’re ready to eat them.

The tubers are edible raw or cooked. You just have to wash the dirt off first. This can be a little bit tricky, due to their lumpy, bumpy nature. And the outer skin will always look dirty, just because of the coloration.

“Sweet Potato Vines: How to Grow This Antioxidant Powerhouse”

Slice them thinly and add them to salads or just take a big bite out of one. They’re a bit like a potato, but sweeter and with a bit of a nutty flavor. Just don’t eat too many at one time. Jerusalem artichokes, as with many other members of the Asteraceae family, like to store their energy as inulin. Inulin is basically indigestible by humans, but our gut microbes can really go to town on it, producing excess gas as a byproduct. As alluded to earlier, this is where the name “fartichoke” comes from.

Jerusalem artichokes can be boiled like potatoes or cooked in a wide variety of recipes, but don’t overcook them or they become mushy. When cooked, their inulin breaks down into fructose, making them much sweeter, but potentially lessening some of those health benefits.

The internet abounds with gourmet recipes. Personally, I go with the simple approach. Cut them into slices and toss them in with a stir-fry, near the end. Or cut them up and add them to stew. They also make a pretty nice soup with bacon and mushrooms. There are plenty of recipes I haven’t had a chance to try yet, like pan frying them or using them in omelets. They’re a very versatile food.

Lastly, being sunflowers, they do have edible seeds. These are small, even in the commercial cultivars, but you can still process and eat them. The entire plant has been used to feed livestock, though I’m not aware of any other parts being edible for humans. The dried stalks do make good kindling and compost material, though. 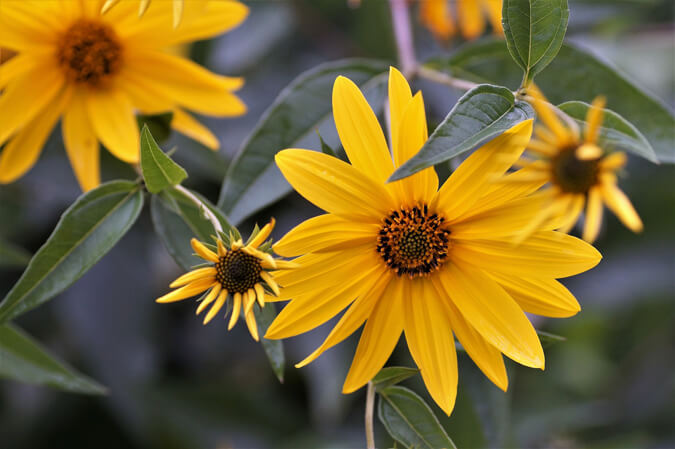 The inulin in raw tubers is technically a carbohydrate, but we can’t digest it. So raw Jerusalem artichokes are better for people trying to fill up while watching their calories and carbs. But the inulin in cooked tubers breaks down into fructose, upping the caloric value, and making them a more viable food for living off the land. Aside from that, Jerusalem artichokes contain mostly water, a fair amount of protein, just a bit of fat, and a decent mix of vitamins and minerals.

If I’ve peaked your interest, take a look around for any dead, dried sunflower stalks in your area. You just might have Jerusalem artichokes. Or just head over to your local grocery store and buy a few to test out. Let me know what you think about them. Do you have any good Jerusalem artichoke recipes to share? Let us know below.