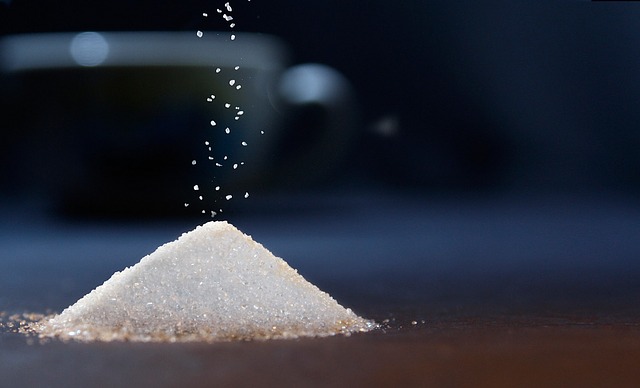 Several foods can increase your risk of developing cancer. Here are 11+ cancer-causing foods that are worth limiting or avoiding altogether. 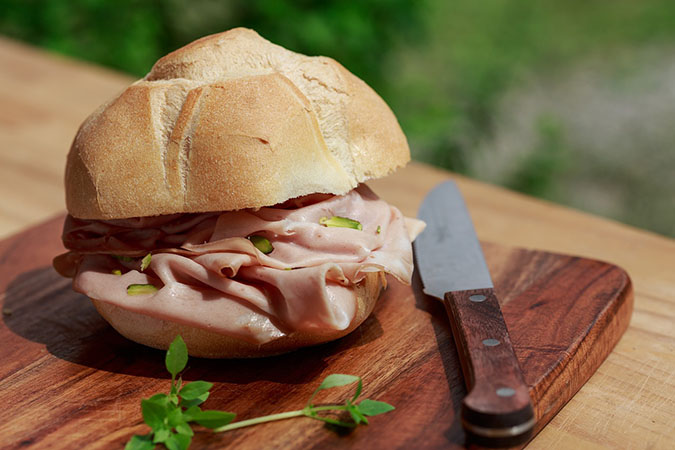 Image by gate74 from Pixabay

There’s a lot of controversy surrounding cancer and what causes it, but everyone seems to agree on at least one thing:

Treating cancer is expensive. Preventing it can be a lot cheaper.

Nearly 1.8 million Americans faced a cancer diagnosis in 2019 (the most recent year for which numbers are available),1)https://www.cancer.org/research/cancer-facts-statistics/all-cancer-facts-figures/cancer-facts-figures-2019.html with a cost of care that, in some cases, ranged upwards of $130,000.2)https://costprojections.cancer.gov/annual.costs.html

Yet, while study after study has shown that diet plays a major role in whether a person gets cancer, and that people tend to make healthier food choices when they’re eating at home,3)https://www.usda.gov/media/press-releases/2014/01/16/american-adults-are-choosing-healthier-foods-consuming-healthier Americans allocate less money toward food consumed at home than pretty much anyone else in the world. For example, according to the USDA’s Economic Research Service,4)https://www.ers.usda.gov/data-products/ag-and-food-statistics-charting-the-essentials/food-prices-and-spending/ we spend 4.9 percent of our income on eating at home, while the Greeks spend just over twice that (10.8%) and the Chinese more than quadruple that percentage.5)https://www.fb.org/market-intel/u.s.-food-expenditures-at-home-and-abroad

“Elderberry: Natural Remedy for Colds, the Flu, Inflammation … Even Cancer!”

And it’s not just people in other countries who spend more of their income on food. Our grandparents did, too. Back in 1960, Americans spent about 17.5 percent of their income on all food—including what they ate at home and what they ate out. Now, we spend about 9.5 percent of our income on eating, regardless of where it takes place.6)http://www.npr.org/sections/thesalt/2015/03/02/389578089/your-grandparents-spent-more-of-their-money-on-food-than-you-do,7)https://www.ers.usda.gov/data-products/ag-and-food-statistics-charting-the-essentials/food-prices-and-spending

The High Cost of Cheap Food 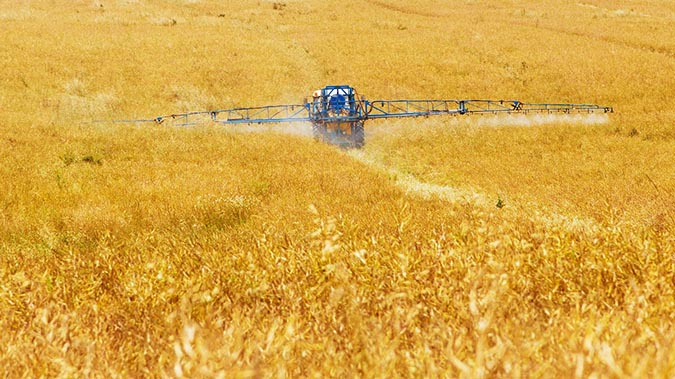 These numbers represent a disturbing shift in our national mindset. We’ve moved from a time when soils were healthier and food was more nutritious and generally less processed—but more expensive—to the present day, when the soils used in commercial agriculture are more depleted, the produce grown in them is less nutritious, and widely available foods are more processed—but also more affordable.

Simply put, Americans are not used to paying what high-quality food costs anymore.

“How To Express Garden Gratitude”

“You Did WHAT To Those Farkleberries?! (Homesteading Basics)”

But even though processed, packaged foods are sometimes cheaper than their sustainably produced, whole-food alternatives, their true cost can be astronomical.

The 2 Possible Causes of Disease

According to Dr. Raymond Francis, author of “Never Fear Cancer Again,” disease has only two possible causes: toxicity and malnutrition.

The foods that increase cancer risk often contribute to both.

The bottom line is that we can pay more now for healthier foods and the deeper nutrition and reduced toxicity that come with them—whether we’re paying financially or, if we’re backyard food producers, through an investment of time and energy—or we can pay more later to treat the diseases that can stem from malnutrition and toxicity. As one young TEDx speaker, Birke Baehr, put it back in 2011, “We can either pay the farmer, or we can pay the hospital.”8)https://www.youtube.com/watch?v=SvVZwJbs54c

In the end, one of the best ways to reduce your risk of cancer is by eating the diet we all know we should—filled with high-quality vegetables, fruits, whole grains, proteins, and healthy fats.

If you’re not quite there yet, and you’re interested in reducing your risk of cancer by cleaning up your diet, the following list of carcinogenic (or potentially carcinogenic) foods is a good place to start. You can improve your health even further by replacing them with foods from our list of 30+ Cancer-Fighting Foods.

One final note: As you read this list, remember the old adage that “the dose makes the poison.” Even water, which everyone would agree is absolutely essential for life, can kill you if you drink too much at once.9)https://www.scientificamerican.com/article/strange-but-true-drinking-too-much-water-can-kill While it’s best to avoid these foods on a consistent basis, most of them probably won’t hurt you if they’re consumed every once in a while. After all, what’s a BLT without the bacon? 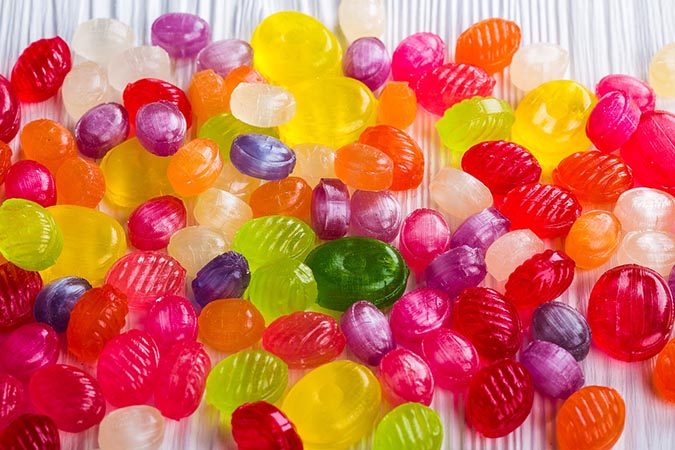 Image by Дарья Яковлева from Pixabay

Cancer has a favorite food. It’s sugar. Without it, cancer cells can’t grow and spread—in fact, they need almost 50 times more sugar to function than regular cells, according to Dr. Nasha Winters, author of “The Metabolic Approach to Cancer.” In addition, up to 80 percent of cancers are fueled by glucose and insulin, in one way or another.10)http://www.greenmedinfo.com/article/recent-observations-indicate-cancer-cells-readily-utilize-fructose-support-proliferation-and It’s easy to see why too much sugar in the diet is a very bad thing. In fact, the less refined sugar, the better! 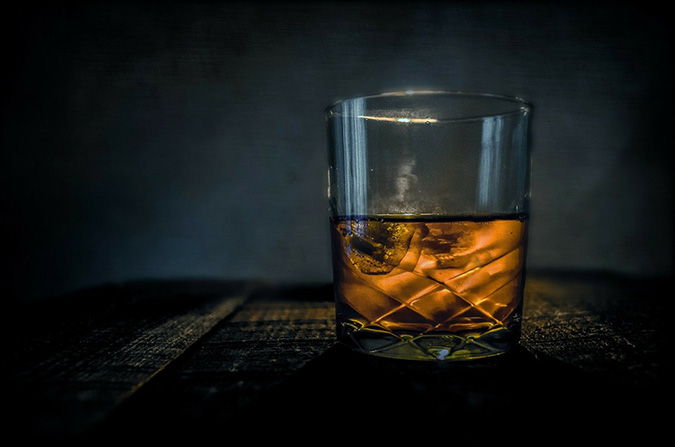 Our bodies turn the ethanol in alcoholic drinks into acetaldehyde, a known carcinogen. In addition to damaging the body’s DNA and keeping cells from being able to perform repairs, alcohol also increases estrogen levels in the blood (a contributor to breast cancer), prevents the body from absorbing several nutrients, and may contain carcinogenic contaminants.11)https://www.cancer.gov/about-cancer/causes-prevention/risk/alcohol/alcohol-fact-sheet#q3 It should be noted, however, that red wine contains resveratrol, a substance that has been shown to have anticancer properties.12)https://www.ncbi.nlm.nih.gov/pubmed/28123566 While the substance itself has been widely studied, only a few studies have looked at whether drinking red wine reduces a person’s cancer risk. 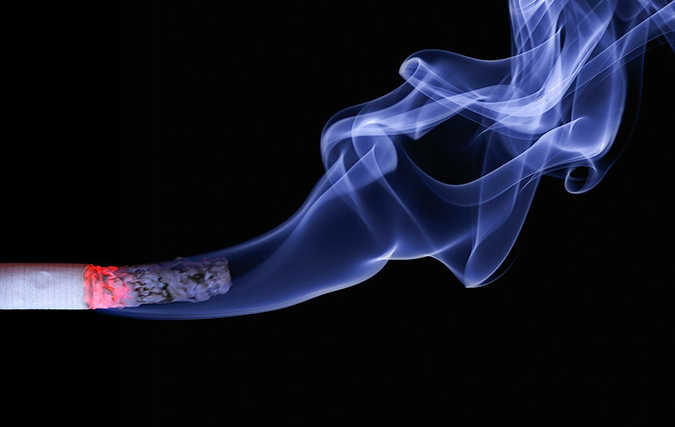 Image by Ralf Kunze from Pixabay

This one’s no surprise. While tobacco is lovely when used for plant gratitude, and Native American cultures believe it offers its own gift of interpretation to help with disputes, it can wreak havoc on a person’s body when it’s smoked or chewed. Smoking tobacco, inhaling secondhand smoke,13)https://www.cancer.gov/about-cancer/causes-prevention/risk/tobacco/second-hand-smoke-fact-sheet or using smokeless tobacco—whether chewing tobacco or snuff—all put loads of carcinogenic chemicals into your body.14)https://www.cancer.gov/about-cancer/causes-prevention/risk/tobacco/cessation-fact-sheet 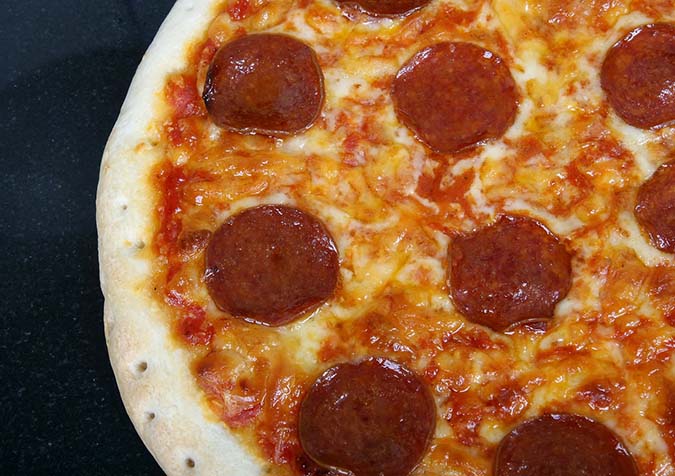 Defined as any meat that’s been preserved through curing, being salted or smoked, or by other means, processed meats include bacon, hot dogs, sausage, and lunch meats including corned beef, salami, pepperoni, capocollo, bologna, mortadella, and ham. They are categorized by the International Agency for Research on Cancer (IARC) as “carcinogenic to humans.”15)https://www.iarc.fr/en/media-centre/pr/2015/pdfs/pr240_E.pdf Scientists suspect that the nitrite preservatives contained in processed meats are what causes the harm. The body can convert these nitrites into N-nitroso compounds (NOCs), which damage cells in the bowel lining. To heal the damage, cells replicate more often, which in turn provides more opportunities for DNA replication errors. 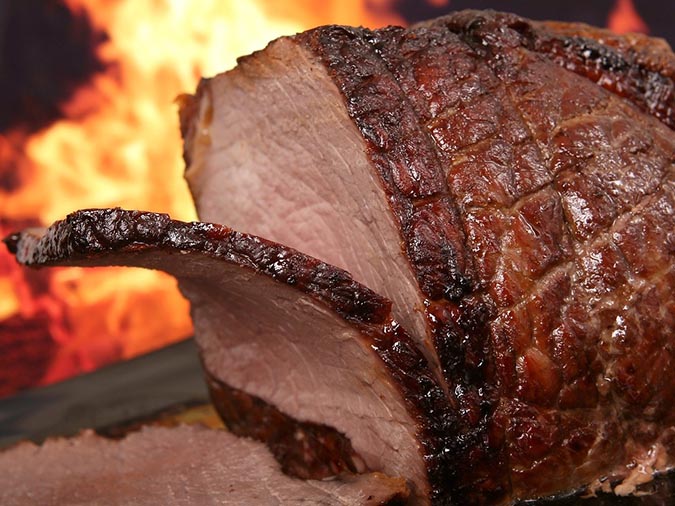 Beef, lamb, and pork contain heme iron, a naturally occurring red pigment that helps form carcinogenic compounds in the body and has toxic effects on cells and genes.16)http://cancerpreventionresearch.aacrjournals.org/content/4/2/177 It’s important to note that, in their research, scientists are lumping industrially produced red meat together with meat from animals raised on a natural, healthy diet. There’s very little discussion in the scientific community on whether meat of healthier animals—such as cows fed and finished on grass—has the same negative effects. However, the discussions that do exist acknowledge that pasture-raised meats contain omega-3 fats that make them “less pro-inflammatory than grain-fed meats.”17)https://osher.ucsf.edu/patient-care/integrative-medicine-resources/cancer-and-nutrition/faq/animal-protein-cancer-risk

Grilling meat at high temperatures can produce heterocyclic amines and polycyclic amines, both of which can increase a person’s risk of developing cancer.18)http://www.cancerresearchuk.org/about-cancer/causes-of-cancer/diet-and-cancer/how-healthy-eating-prevents-cancer

In addition to the processed, salt-cured meats mentioned above, this category includes salted fish and some pickled vegetables. The IARC lists Chinese-style salted fish as carcinogenic, but hasn’t yet made a determination on whether other types of salted fish increase the risk of cancer in humans. 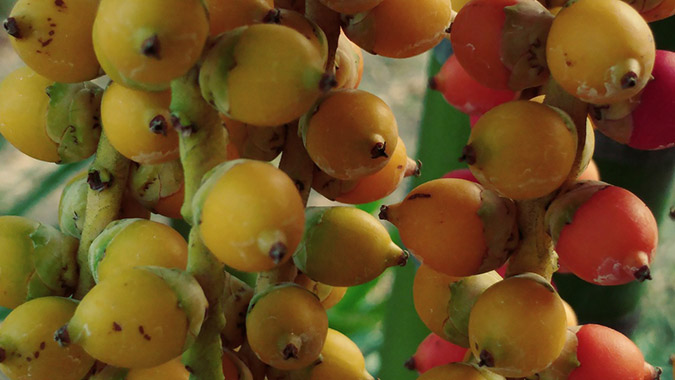 Image by pisauikan from Pixabay

About 10 percent of the world’s population still chews this addictive berry. It’s been shown to have several ill effects on the body, and is linked to numerous cancers.19)https://www.ncbi.nlm.nih.gov/pmc/articles/PMC4080659

According to M.D. Anderson Cancer Center, the link between artificial sweeteners and cancer is inconclusive—but possible. Since some studies have shown a correlation between the two in lab animals, the current recommendation is to avoid artificial sweeteners like aspartame and saccharine altogether.20)https://www.mdanderson.org/publications/focused-on-health/may-2015/FOH-cancer-love-sugar.html[/note] 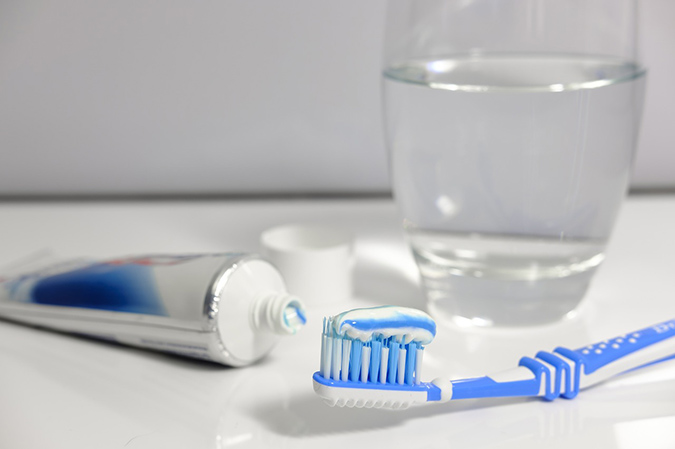 Image by Bruno /Germany from Pixabay

Okay, so, technically toothpaste is not a food, but it made this list because it’s ingestible and some formulations may contain disperse blue 1, a dye that’s listed by the IARC as possibly carcinogenic to humans—and that’s also used as a hair and fabric dye.21)https://ntp.niehs.nih.gov/ntp/roc/content/profiles/disperseblue1.pdf Worth keeping an eye on!

“6 Reasons You Should Be Using Tooth Powder”

“10 Easy Ways to Take Care of Your Teeth … Naturally!”

“The 7 Stages of Home Medicine Makers” 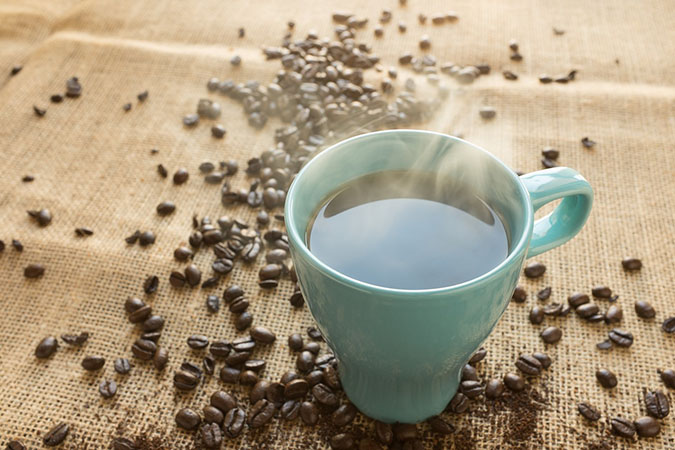 Image by Craig Melville from Pixabay

Studies in cultures where people typically drink their tea or mate at about 149°F (70°C) have found a correlation between very hot beverages and the risk of esophageal cancer. But, unless you keep a thermometer handy when you’re drinking your morning Joe, how are you supposed to know how hot is too hot? Here’s a good rule of thumb: If you have to sip it to be able to drink it, let it cool a bit first.

What about you? What’s your take on what causes cancer—and what you can do to prevent it? Leave us a comment below!