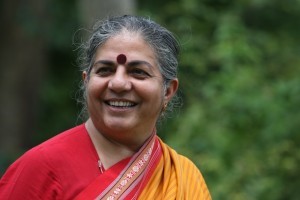 Have you seen this video of Indian scholar and sustainable-agriculture advocate Vandana Shiva talking about the true cost of cheap food and three keys to ending what she calls “the final stages of a very deceitful system”?

(By the way, Shiva is on our list of 50 Global Changemakers, here.)

She makes some excellent points, and I thought you might enjoy the video as much as I did.

Some of my favorite quotes from the video:

I also love the way she defines “true freedom” in the video: “Never be afraid of deceitful, dishonest, brutal power. That is true freedom.”

And hey, let me know what you think about her solutions to the problem of high-cost “cheap” food! What others would you add? Leave me a comment below. 🙂

(This article was originally published on January 20, 2018.)