Straw Bale Gardening: How to Succeed

It’s a lot easier to have soil problems than soil perfection. But whether you’re dealing with pH complications, drainage issues, rocky or cold soil, or perennial pest and disease concerns, Joel Karsten has a solution for you . . . straw bale gardening!

If you have soil concerns, this method is worth considering. (Be aware, however, that there are some hidden dangers to keep in mind.)

The following article provides a summary of highlights from Marjory and Joel’s conversation.

And If You Missed the Podcast, Click Here to Listen Now!

Straw Bale Gardening—What Is It and How Does It Work?

And it doesn’t have to be straw. It can be any tightly compressed organic matter. Use whatever you have available in your area: oat straw, wheat straw, barley straw, rice straw, hay, grass clippings, etc.

Depending on how large and tightly compacted your bales are, you may be able to get a couple of growing seasons out of them.

But even when the bale has lost its shape and decomposed extensively, you can still take that same straw, put it in a large container, and compress it. If needed, add additional organic matter such as fresh grass clippings and leaves, and just make a new “bale” yourself.

Essentially, you are creating virgin soil within the interior of the bale—soil that is free from lingering disease or insect problems, and which provides the nutrient capacity the roots need to grow. To create this decomposition, you encourage the rapid reproduction of naturally occurring bacteria by “feeding” them nitrogen.

Now, depending on which kind of straw you’re using, you could be starting with as much as an 80:1 ratio of carbon to nitrogen. What you’re aiming for at the end of the conditioning process is a 20:1 ratio. So, you’ll need to add a significant amount of nitrogen. (This process is called “conditioning” the bale.)

You’ll spend several days conditioning the bale, although exactly how long it takes depends on what type of nitrogen you choose—traditional or organic.

This will help ensure that the temperature outside isn’t so cold that it inhibits bacterial growth. (If, however, you get a cold snap during this time and the daytime temperature stays below 45°F one day, just pretend that day didn’t exist. Don’t treat your bales at all that day—no fertilizer, no water. Simply start the conditioning process up again the next day.)

If you condition your bales using traditional fertilizer, such as lawn fertilizer, the process will take 12 days from start to finish. Choose a lawn fertilizer that has at least 20 percent nitrogen. (Nitrogen will be the first of the three numbers on the bag.) Make sure it’s not slow-release nitrogen.

Use 1/2 cup on days 1, 3, and 5 of this process. Simply spread it on top of the bale. (You’ll add water afterward, which will help push the fertilizer into the interior of the bale. More on this in a minute.)

You’ll need 18 days to complete the conditioning process if you use organic fertilizers such as feather meal or bone meal, both of which have about 12 percent nitrogen. These fertilizers work because they are high in protein, and as it decomposes, protein becomes nitrogen.

(Some people even use urine, which has between 9 and 12 percent nitrogen, but keep in mind that you’ll need about 3-1/2 gallons of urine per bale per day!)

On the 10th day, it’s time to add phosphorous and potassium. Do so by applying 1 cup of bone meal and 1 cup of wood ash to each bale.

You’ll be ready to plant in the bale by day 18.

Whether you use organic or traditional fertilizers, you’ll need to water your bales every day—during both the conditioning process and the growing season.

Every day during the conditioning process, add one gallon of water to each bale. If you’re watering on a day when you also fertilize, add the fertilizer first, then top it with water to help push it into the bale.

It’s okay if the fertilizer doesn’t completely wash into the interior. The bacteria will actually come up to the surface of the bale to access the fertilizer when they need it.

Ideally, use water that has been warmed to air temperature so you’re not inhibiting the decomposers with frigid water straight from the spigot. Simply fill a bucket with water today, then use it tomorrow so the water has had a chance to warm up a bit.

Once the conditioning process is complete, you’ll still want to water your bales each day.

There are two options that Joel recommends: 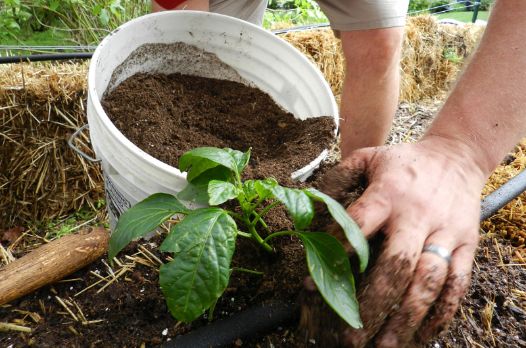 The Benefits of Straw Bale Gardening

What Grows in a Straw Bale Garden?

Most plants will thrive in a straw bale garden.

Personally, Joel has had trouble growing onions and rosemary in his.

He also doesn’t recommend trying to grow sweet corn in straw bale gardens, because their height and big root structure make the process inefficient. (You’d only get about four good stalks of corn per bale!)

And perennials like asparagus and rhubarb aren’t ideal since the bale will break down before those plants really start to produce well.

How Many Plants Per Bale?

Space your plants in the bale as you would if you were planting them in the ground. You might even be able to space them a little bit tighter.

In a bale, though, what you’d usually plant in a row you’ll plant in a checkerboard pattern, instead.

You can also build a trellis above the bales to allow your larger or vining plants—such as green beans, tomatoes, sweet potato vines, cucumbers, and squash—to grow vertically instead of horizontally.

It’s a very productive method, and you end up with a lot less disease and a lot fewer insect problems.

Any Special Instructions for Planting Seeds?

If you’re going to plant tiny seeds, you’ll need to make a seed bed on top of the bale with some really clean compost or potting mix. Spread it into a half-inch layer and put your seeds in that. They’ll root right down into the bale.

If the seeds you’re using are big, such as peas and beans, you can use your finger to push them right into the bale.

What If My Bale Is Full of Mature Seeds When I Get It?

While you are conditioning a bale, its interior will reach approximately 140°F or 150°F. This heat is going to kill most of the seeds that may be present at first.

But it won’t reach the outside of the bale, so it’s still possible to end up with a “chia pet” growing out in your garden.

If you do, simply head outside with a sponge mop and a cake pan filled with vinegar and a squirt of liquid dish soap. Dunk your sponge mop in the liquid, and wipe down the outside of the bale.

When those sprouts first emerge, they have very limited energy reserves. The vinegar solution will knock them back. And, since they won’t have enough energy in the seed to regrow, you’ll only need to use the vinegar solution on them once.

What if There Are Latent Herbicides in the Bale?

It’s true that many fields are sprayed with broad-leaf herbicides, and that it can take some of these chemicals a pretty long time to break down naturally. It’s one of the reasons we are often cautioned against using straw or hay as mulch in our gardens. After all, most of our edibles are broad-leaf plants, too.

Read More: “How to Rescue a Garden Destroyed by Grazon Contamination”

However, one of the great things about a straw bale garden is that it takes the guesswork out of whether or not your bales contain latent herbicide. The truth is that, if they do, your plants simply won’t grow.

If you’re concerned about it, though, Marjory recommends a simple test. (This test also works for manure.)

How Do I Keep Mice From Nesting in the Bales?

Since the straw itself has been harvested, it shouldn’t contain many oats or wheat seeds. That means it doesn’t provide much of a food source for rodents.

Also, during the conditioning process, the bale gets really hot inside and the interior starts to turn into a big, mushy pocket of soil. Neither of those conditions are attractive to mice or rats.

That said, there are a couple of things you can do to further discourage rodents from taking up residence in your straw bale garden:

It’s always important to do your research when embarking on a new gardening adventure. But once you do, you may find that straw bale gardening is the solution you’ve been looking for—no matter where you live, what your soil is like . . . or whether you have soil at all!

What are your experiences with straw bale gardening? Share your tips, successes, and cautions in the comments below!

(This is an updated version of an article that was originally published on July 5, 2017.)