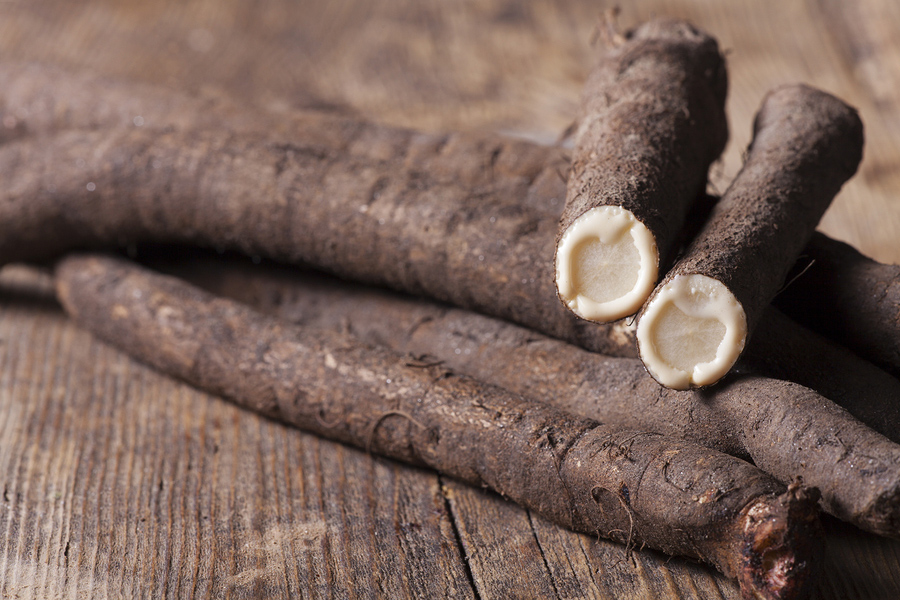 I lecture all over the place, and in all of my talks, there is one topic that has never come up. No matter where I have spoken—whether live, on the radio, or via podcast—never have I been asked about salsify. Reading this, you may even think that the word “salsify” is a misprint! It isn’t. Nobody knows about salsify anymore, and that’s a shame because it is a very health-promoting vegetable.

Salsify is native to Southern Europe and the Middle East, but its actual point of origin is believed to have been Spain. You rarely see this vegetable outside of Europe, or even in the United Kingdom, as the conditions for growing there aren’t ideal. However, it remains very popular in Germany, the Netherlands, Belgium, and other central and southern European countries. Salsify was a very popular vegetable with the Victorians, but it fell out of fashion in the 20th century and can now mainly be found at farmer’s markets and online specialty stores. It’s in season in the late fall and winter and really deserves a spot in every phytonutrient garden.

You May Also Like: “Vegetable Gardening in Drought Conditions”

Don’t Judge Salsify By Its Appearance

It may look like an ugly brown stick, but don’t judge salsify on its outer appearance. This is a white root—rather like a parsnip, but skinnier—that keeps beautifully in the ground. Like the parsnip, it’s planted in spring, as early as the ground can be worked, and then allowed to grow all summer and fall until the first frosts bring out its flavor. You can then pull it up during thaws. You can also save some under refrigeration if you’d like, but that will cause it to shrivel a little, so it is best dug and eaten fresh.

When you dig it up or find it at a farmer’s market, don’t be dismayed by the way those roots look. They are tan to black in color and often shaggy with coarse side roots. They may remind you of a classic tabloid headline, “Movie Stars Without Makeup.” But just wait until they’re all dolled up.

How to Prepare Salsify

The dolling-up process consists of peeling the root with a vegetable peeler to reveal the snow-white flesh, then placing them into a bowl of water with a couple of squeezes of lemon juice to keep their bright white flesh as pretty as possible. Or you may want to skip the lemon juice, because if you’re going to brown them in butter anyway, it won’t matter, right? And that’s just what I do with them after I’ve steamed them for 15 to 30 minutes, depending on their size.

I also use the greens, which look like tall, wide grass blades. The light-colored part of the leaf—the bottom six inches or so—is tender and delicious, like the bottom of a leek, so it gets a thorough washing and then a quick butter sauté, along with the roots. The first time you eat salsify, the most surprising thing about it is its flavor. Salsify belongs to the dandelion family and is also known as the “oyster plant” because of its oyster-like flavor when cooked (though there’s some debate on that front). Personally, I think they taste more like artichoke hearts than oysters.

This is a great two-in-one crop. Greens and roots tend to nourish us in different ways, and the role of roots is to bring up minerals from deep below the soil—especially a tap-rooted plant such as salsify. That’s why it’s important to give these crops a deeply cultivated soil in your garden and to be sure to mix in plenty of compost.

Salsify—It’s Tasty, and Healthy, Too

Some of the health benefits of salsify include its ability to lower blood pressure, boost the immune system, stimulate hair growth, increase circulation, improve numerous elements of your digestive health, increase the metabolism, and positively affect bone mineral density.

Black salsify can be eaten as a normal vegetable, and is quite complementary to peas and carrots, usually after boiling (or better yet, steaming) it. It is a popular alternative to asparagus and is prepared in many dishes in a similar way, including in white béchamel sauces with broccoli or cauliflower. Although the black salsify “craze” hasn’t spread too far out into the world, it is beginning to occasionally show up in some exotic food stores and import locations in North America. The reason black salsify is so important is that it is chock-full of beneficial nutrients and components that make it a serious booster for human health.

You May Also Enjoy: “Unusual Onions—Forgotten Members of the “Stinky Rose” Family”

The Many Health Benefits of Eating Salsify

Salsify is a veritable treasure trove of nutrients, including significant quantities of iron, potassium, calcium, manganese, phosphorous, magnesium, and copper, as well as vitamins including ascorbic acid, pantothenic acid, thiamine, riboflavin, folate, and vitamin B6. Salsify also has impressive amounts of dietary fiber, protein, and inulin.

Just look at this:

• Blood Pressure: The high potassium content (15% of the daily recommended amount in a single serving) and the low level of sodium mean that salsify can significantly improve blood pressure problems by relaxing the blood vessels; reducing the strain on the cardiovascular system; and preventing the chance of blood clots, heart attacks, and strokes. Potassium is also an essential element for building strong bones, and has even been praised for its ability to boost cognitive ability, possibly due to the increased blood flow to the brain that vasodilation can stimulate.
• Digestive Health: There are a number of ways that salsify can help boost the health of your digestive system. First of all, a single serving of salsify contains nearly 20% of your daily recommended amount of dietary fiber, which is essential for stimulating the passage of food through your body; decreasing constipation; easing bowel discomfort; and preventing more serious conditions, like gastric ulcers. Furthermore, much of the fiber is in the form of inulin, which is a relatively rare prebiotic fiber that increases the growth of bifidobacteria in the gut. This can reduce cancer-causing agents in that organ system, maximize the efficiency of nutrient absorption, and provide a boost to the immune system.
• Circulation and Hair Growth: The high levels of iron and copper found in salsify mean that your circulation will improve, as iron and copper are both essential for the creation of red blood cells. More red blood cells mean more oxygenation to important tissues and organs, including the follicle beds. Salsify has been shown to stimulate the regrowth of hair. Furthermore, copper on its own has been linked to increasing hair strength and a reduction in premature graying.
• Immune System: The combination of vitamin C and significant levels of other vitamins and minerals that improve metabolic efficiency and functionality throughout the body helps the immune system. Vitamin C stimulates white blood cells; vitamin A functions as an antioxidant; and the benefits of B-family vitamins range from increasing enzymatic functions to regulating hormones. Salsify has such a diverse range of phytonutrients that almost every organ system is somehow positively affected, meaning that the body is working in top form.
• Bone Strength: The high levels of magnesium, phosphorous, calcium, copper, iron, and manganese form a strong mineral base for developing bone tissue. Vitamin C also plays an essential role in this bone creation process. With sufficient bone mineral density, you can prevent the development of common, age-related conditions like osteoporosis and even arthritis, which can occur when bones begin to degrade and connective tissue (collagen) no longer maintains the integrity of your joints.
• Blood Sugar: Salsify is low on the glycemic index. The glycemic index (GI) ranks food and drinks based on their blood sugar increase potential. Foods high on the glycemic index (such as white rice and white bread) will break down easily and cause blood sugar and insulin level spikes after meals, which is followed by rapidly dropping blood-sugar levels. Salsify is slowly absorbed into the bloodstream, which prevents sugar crashes, sugar cravings, and mood swings. This provides long-lasting energy for athletes. From a scale of 0 to 250, salsify has a rating of 10 on the glycemic index scale.

Salsify—try it today, and it may well become a favorite!

Have you tried salsify? What are your best tips and tricks for growing and eating it? Let us know in the comments!

(This is an updated version of an article that was originally published on September 9, 2016.)