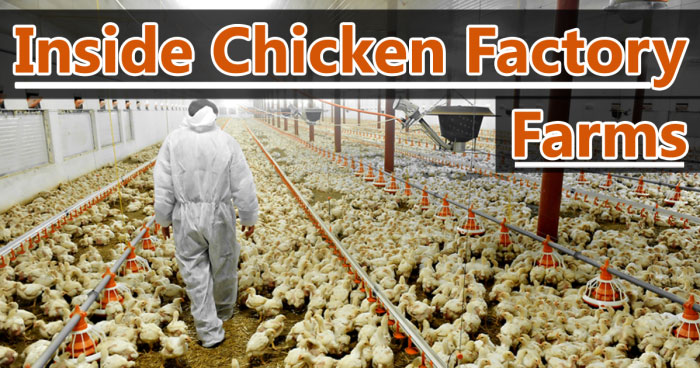 Despite the enormous amounts of chicken meat getting churned out daily, few people have any idea what’s really involved with raising chickens in a commercial setting.

Every year, more than 9 billion chickens1)http://www.upc-online.org/chickens/chickensbro.html are raised and slaughtered in the United States, which accounts for roughly 95 percent of the land animals butchered for food each year.

The Factory Approach to Raising Chickens

As the meat industry has grown, the large companies that monopolize it consistently find ways to shield consumers from the reality of their meat. Though consumption of chicken meat has more than doubled per person since the 1970s,2)https://www.ers.usda.gov/data-products/food-consumption-and-nutrient-intakes.aspx few people outside the industry have ever seen the inside of a chicken farm.

While it’s easy to imagine that most chickens spend their lives scratching around in lush pasture, the truth is quite different.

To understand the way that 99 percent of chickens are raised in the United States, you need to look closer at the factory farm.

Origins of the Factory Farm

Until the 1950s, raising chickens for meat was a costly process, so most people made do with the occasional chicken dinner as a Sunday treat.

Eggs were the prized commodity, and chicken meat was considered a bonus byproduct of raising eggs. Most coops were small, housing about 60 birds, and these birds had constant access to the outdoors to nest, roost, dust bathe and enjoy other natural chicken behaviors.

By the 1980s, the egg industry scaled up and began to shift from standard coops to massive complexes that often housed a half million birds per coop.3)http://www.factory-farming.com/factory_farming.html

While these measures increased productivity and made economic sense, they came at a cost to the birds’ quality of life with overcrowding, disease and high death rates.

At the same time, advances in breeding produced the ‘broiler,’4)http://www.upc-online.org/books/prisoned_chickens_poisoned_eggs_2009.pdf a chicken breed that gained weight faster and more efficiently than other varieties, making it perfect for the standardized conditions factory farms use when raising chickens.

Within a matter of decades, chicken moved from a luxury good to a standard meat that most families could afford to eat almost daily. 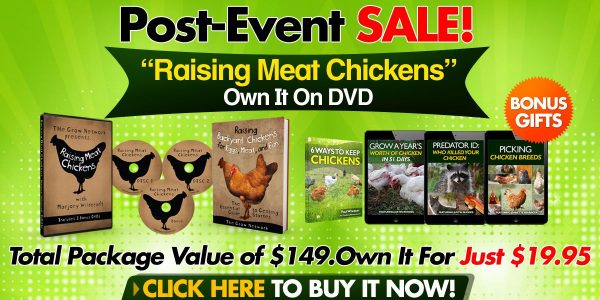 By nature, chickens are intelligent and social birds.

They prefer to live in groups of 30 in well-defined pecking orders, and they can recognize their flock mates and bond through communal activities like dust baths and prowling pastures in pursuit of bugs.

Hens are also extremely maternal and spend large portions of their lives sitting on eggs and raising their young.

Unborn chicks even chirp to their mothers through their shells.

In almost every way, factory farms stifle natural chicken instincts and force them to live in ways that are highly unpleasant for their physical and psychological health.

Some of the common issues plaguing modern chicken farms are described below.

Space is money in factory farms, so most broiler chicken facilities tend to be extremely crowded, often allotting less than one square foot per chicken.5)https://www.theguardian.com/environment/2016/apr/24/real-cost-of-roast-chicken-animal-welfare-farms

Not only does this make it impossible for chickens to roam, scratch or find any privacy, it thwarts their natural tendency to set up a hierarchy. This inevitably causes social tensions, and chickens respond to the stress by pecking each other and fighting.

To prevent the birds from injuring each other, chicken farmers simply debeak baby chicks with a hot blade (without any anesthesia) mere hours after they hatch.

Not only are most chicken farms critically short on floor space, they are also dark, stuffy and even dangerous.

Chickens evolved in tropical forests,6)http://www.upc-online.org/books/prisoned_chickens_poisoned_eggs_2009.pdf and they like nothing more than fanning out their feathers on a hot summer day.

Yet, most factory farms are windowless, meaning that the thousands of birds in each house live out their days in a dusty, ammonia-filled space without ever seeing the sun.

Most chicken eaters tend to prefer white meat, so the breast and thighs are the most valuable part of each bird.

In the past decades, chickens have been bred to capitalize on this trend, and the resulting broilers have drastically enhanced breasts and thighs, to the point that these body parts outpace the growth rates of their leg bones and organs.

While broiler skeletons are only 85 percent formed at six weeks old, their bodies are required to support far more weight than a regular bird.

This means that most broilers become so heavyset at a few weeks of age that they can barely walk, and some break their legs or suffer heart attacks from the strain.7)https://www.ncbi.nlm.nih.gov/pubmed/17435038

It’s not unheard of for some birds to die of thirst, as their overinflated bodies can make it physically impossible for them to reach their water nozzles.

It turns out that extra fat is bad for the consumer, too.

Studies conducted in London found that modern broiler chickens have three times the amount of fat they had 35 years ago,8)https://www.ncbi.nlm.nih.gov/pubmed/19728900 mostly due to their carbohydrate-heavy diets and inability to roam around.

Pressure in the egg industry to produce cheaper cartons can also lead to physical problems for hens. Because of genetic selection for birds that start laying eggs younger, some hens struggle to lay eggs when their bodies aren’t fully developed.

This can lead to prolapsed uteruses,9)http://www.the-chicken-chick.com/2012/04/prolapse-vent-causes-treatment-graphic.html or a uterus that gets pushed partway out of the body and immediately becomes vulnerable to infection and disease.

Because of the expense of treating illnesses like this, most prolapsed hens are left to languish until they die.

Of the 300 million laying hens10)http://www.peta.org/issues/animals-used-for-food/factory-farming/chickens/egg-industry/ in the United States today, over 95 percent of them spend their lives in wire battery cages, most of which provide less than the size of a sheet of paper in living space.

This provides far less room than a hen needs to turn around, flap her wings, preen, or bathe.

These hens are crammed eight or nine in each cage, and the cages are stacked on top of each other, meaning that feces and food spills on the hens below. Fresh laid eggs drop through the wires of the cage for easy collection, therefore stifling the hen’s instinct to brood.

The inability to exercise and constant egg production means that calcium leaches from the hen’s bones, often causing them to break.

Resting against metal wires also causes injuries to her skin and feet, and most hens get severe skin abrasions on their sides. The combined stress of captivity and copious egg production ensures that most hens live for two years or less.

If the living conditions in egg farms are bad for hens, they are deadly for roosters.

As male chicks can’t lay eggs, they are considered to have no value and are suffocated, electrocuted, gassed, or ground up as soon as they are sexed.

In the wild, chickens spend much of their days foraging for sprouts and insects, meaning that their diet provides them with plenty of nutrition.

When factory farms are raising chickens, they feed them only GMO grains, and their rations are often mixed with ground up bits from other animals,11)http://articles.mercola.com/sites/articles/archive/2014/07/23/cheap-factory-farmed-chicken.aspx including the carcasses of cows, pigs and even other chickens.

To keep birds healthy in overly crowded and poorly ventilated conditions, they are fed copious amounts of antibiotics.

This helps control for bacterial diseases that otherwise thrive in coop conditions and helps birds retain water to add on weight before butchering. Widespread use of antibiotics in the meat industry is leading to global problems, including the rise of antibiotic-resistant “superbugs.”12)https://thegrownetwork.com/antibiotic-free-meat/

It’s naïve to think that the all chickens in the grocery were healthy when they died.

In truth, many factory farm chickens are sick for much of their lives due to living in unsanitary, overcrowded conditions.

These birds spend their lives walking through piles for their own excretion and feathers, burning their eyes from the ammonia that results. This means that factory chickens have weakened immune systems, making them more susceptible to catching diseases from other chickens.

These conditions make the salmonella bacteria easy to spread, occasionally resulting in contamination for humans from uncooked meat.

Sometimes, infections become so out of control that an entire coop of chickens needs to be put down to prevent an outbreak from exploding.

In northwestern Iowa, such a fate met the chickens of Sunrise Farms.13)http://www.cnbc.com/2015/04/24/inside-sunrise-farms-avian-flu-chicken-slaughter.html

Some of the birds in the 3.8 million flock contracted a case of bird flu, meaning that every bird in the facility was condemned to death and that the facility itself was quarantined indefinitely.

Allowing large concentrations of animals to live together in cramped conditions inevitably leads to pollution problems, and commercial chicken farms produce a tremendous amount of waste every year.

According to research, a one million-bird hen house produces 125 tons of wet manure14)https://www.nrcs.usda.gov/wps/portal/nrcs/detail/null/?cid=nrcs143_014211 every day, meaning that every truckload of feed that comes on a farm requires another load to carry waste away. This manure is often stored in massive piles where it can leak into the water system and create toxic conditions for nearby ecosystems.

Are ‘Free Range’ Farms Any Better?

As customers have gotten more informed about the true conditions factory farms provide when raising chickens, many companies have adjusted their poultry and egg production to be “free range.”

At first glance, this seems like a victory for chicken welfare, but is it?

In truth, there is no uniform standard about what it means to be raising chickens “free range.”

Chickens only need to be kept cage free and have access to the outdoors to qualify, even if they are packed onto overcrowded coop floors and their “outdoor space” is a cement pad that few birds ever venture on.

This means that the majority of ‘free range’ farms are as cramped and windowless as any other.15)http://advocacy.britannica.com/blog/advocacy/2007/05/the-difficult-lives-and-deaths-of-factory-farmed-chickens/

Video: A Glimpse Inside

Ready to see inside a chicken farm yourself?

Getting photos or video footage inside a chicken coop is never easy, as the large companies that own them find it better that their customers have little idea of what’s really going on.

Farmers are often reluctant to speak up, as publicly complaining about the company they are contracted with can leave them in a lot of trouble, and often leads to hefty fines and broken contracts.

That’s why this footage from Craig Watts is so valuable.

Risking his business to reveal the truth, Craig allowed a film crew into his coops to get a look at what really goes on inside.

If you want an insider look at the way Perdue is raising chickens, watch this video to see for yourself.

Raising chickens cheaply comes at a high cost for the planet, your health, and the well-being of the animals involved.

If you want to make a stand for healthier and more humane poultry practices, it’s important to know the reality of the dismal conditions within chicken farms today.

And consider raising your own backyard chickens … for eggs, meat, or both.   (Watch “Raising Meat Chickens – The Film” to see exactly how it’s done.)