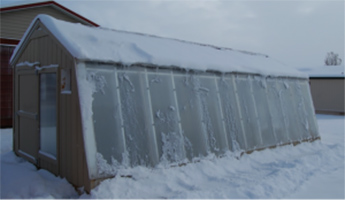 Mad Scientist Works For Greenhouse Heating Independence Down To -25F

My friends have called me many things—some complimentary and some not so much—but perhaps my finest moment came when a dear friend referred to me as me a “Mad Scientist.”

Having spent 20 years working as a communications engineer, it seemed only natural that when I retired I would finally go fishin’ or travel. But no…. I built a lab where I could do solar energy research related to growing food in a self-contained environment.

Soaring Raven Laboratory (SRL) is located in south central Colorado near the foot of the Spanish Peaks at an elevation of 7,000 feet above sea level. The high country climate has dry, warm summers with daily temperatures in the upper 80’s to low 90’s, followed by long, snowy winters.

While it is not uncommon for winter temperatures to drop well below zero, Colorado is blessed with 265 or more sunny days a year, making it an ideal location for testing solar energy applications and conducting related research.

The goal of SRL is to act as a platform for small-scale solar energy research and education by focusing on low-cost, effective, and sustainable grassroots solutions for residential energy needs.

The lab was built around a self-contained 12’ x 24’ greenhouse that has the ability to obtain all of its energy requirements from the sun by the integration of both passive and active solar energy systems. It was constructed in the late fall of 2013 and became operational in December of that same year on the winter solstice.

In designing and locating the greenhouse, there were a number of issues that needed to be overcome. The first was the placement of the greenhouse on a city lot already occupied by a home, detached studio/office, and 10’ x 20’ shed.

To complicate matters, the entire south end of the existing residence was covered by solar collectors, so shading from the SRL greenhouse was a major concern.

However, after careful planning and some compromise, the site was selected and a greenhouse sprouted from the earth!

The electrical power to operate the lab’s ventilation, circulating pumps, and lighting systems comes from an array of solar panels. During sunny days, excess power that’s not needed in the lab is stored in a battery bank to operate an active hot-air solar furnace for the house and provide a limited amount of power for after-hours lighting.

The water required for the greenhouse is a combination of municipal-provided and reclaimed gray water from the home. Currently, research and development is under way to move away from the city resource and use water collected from roof runoff and gray water.

One of the principal objectives of the SRL is to reach a level of complete heating independence down to -25°F. While inside temperatures would hardly be balmy in the greenhouse, plants would still be safe from freezing. Work still needs to be done in this area, as during the winter of 2013, before the greenhouse was in full operation, the internal air temperature dropped to 34°F when the outside temperature plummeted to -16°F.

What’s Cookin’ in the Lab?

At the lab, we are currently testing a simple, low-cost hot water collector to boost the amount of passive solar energy that’s being stored in the 300-gallon thermomass water tanks. Instead of using rigid copper pipe in the collector, we are incorporating cross-linked polyethylene tubing, commonly called PEX or XLPE, which is used frequently in domestic home water systems.

The advantage of using PEX is greatly reduced cost, as much as 75 percent, over the use of copper. Working with PEX is much less labor intensive than working with copper, and should the system ever freeze, copper will rupture whereas PEX is much less vulnerable. On the downside, PEX does not as effectively transfer heat from the sun into the water that is circulating through the system as does copper. When exposed to sunlight, PEX piping can degrade. Exposure to ultraviolet (UV) light in sunlight causes the internal molecular structure of PEX to break down. To counteract this effect, the UV is being filtered out in our collectors before coming into contact with the tubing.

The PEX hot water collector is basically a loop of continuous tubing, perhaps 100 feet long, snaking through a long, shallow, rectangular box painted black and covered with a sheet of polycarbonate. The PEX is connected to a low-speed 200 GPH pump submerged in the thermomass storage water tank. As the water circulates through the loops, it’s heated by the sun. The pump is controlled by a thermostatic sensor located in the solar collector. The end result is that the water in the tank stores the additional heat that, in turn, is released back into the greenhouse as needed.

It was decided that a full-scale test of the collector would be conducted in the winter of 2014-15. For the purpose of this test, 2 of the 4 thermomass storage tanks in the greenhouse were selected. Tank A would act as the control for the test. It would only receive its heat by passive solar collection from sunlight passing into the greenhouse alone, whereas tank B would be heated both by passive solar energy (like tank A) and by the PEX solar collector.

In November 2014, the PEX solar panel added 523,168 BTU’s (British Thermal Units) to test tank B. This energy was released back into the greenhouse in the form of radiant heat.

In the calculation of the energy used in the operation of the active solar collector inside the greenhouse during the November Collector Test Alpha, the International Standard SI unit of energy is the joule and was used for this purpose. However, as the recording instrumentation within the greenhouse is only able report energy consumption in wattage, it became necessary to collect the data in wattage before converting it into joules. One kilowatt hour is equal to 3.6 megajoules, which is the amount of energy if work is done at an average rate of 1,000 watts for 1 hour. This is reflected in the formula below:

The pump that circulates the water through the collector into the test tank consumes 9 watts of power. At this rate, it would take the pump 111.11 hours of operation to consume 1 kilowatt of power. At present, the daily run time is not being collected for the pump; but based on observations, on sunny days, the pump runs for about 6 continuous hours.

During the month of November, the pump ran on 27 of 30 days. Assuming that it ran 6 hours daily, the energy used would be 1.458 kWh or 5.248MJ (megajoules). The price of energy supplied by the local utility is at the rate of 15 cents per kilowatt hour. The cost to operate the pump for this 27-day period was a total of 22 cents.

In December, the total BTUs added to the greenhouse was slightly less than in November at 521,417. This is not surprising, as there were a number of factors that played into this total:

While the PEX solar collector that was under observation collected more than 1 million BTUs during the 2 full months of Collector Test Alpha, even with the help of a second PEX collector this was not enough additional energy to protect the greenhouse from freezing when faced with a combination of nighttime temperatures below -15°F and continuous gray, overcast skies for 2 days or longer.

2.6 million BTUs is a significant amount of energy, and it was produced at a very low overall cost. It’s estimated that the power to run the pump during the 161 days of the research project cost about $1.60, meaning that 16,564 BTUs were generated for each penny spent. The average daily BTUs generated by the collector was 17,225.1

For those of you who are number freaks like me, I would be glad to send you a PDF file with the data. Just drop me an e-mail at:

Russel Erganbright submitted this article as part of The Grow Network’s 2015 Writing Contest. It was originally published on May 7, 2015. Thank you, Russel!