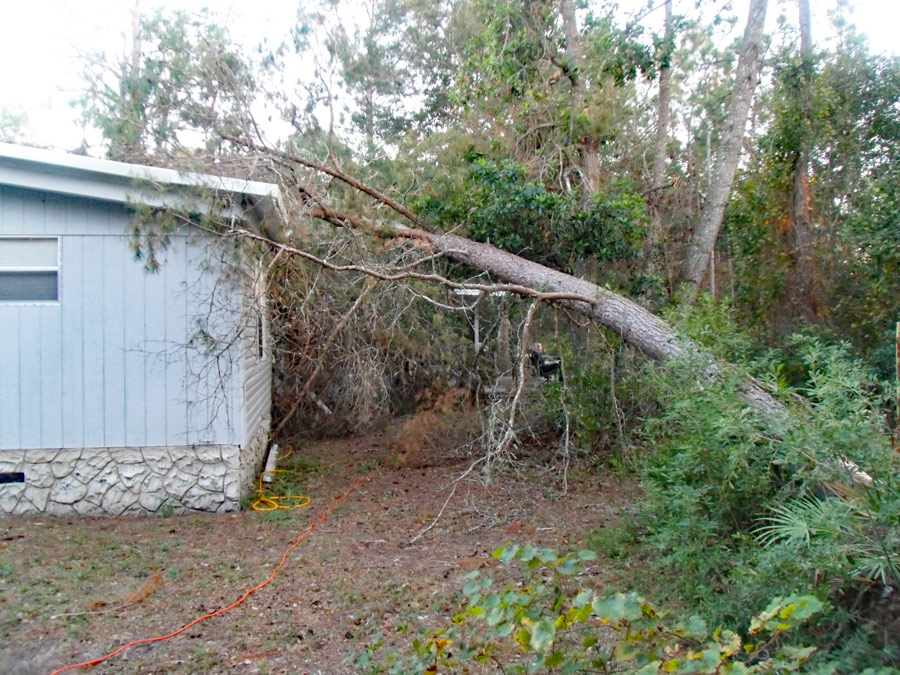 Storms can turn your yard into a wreck, knocking down lots of brush and leaves and taking out branches and even entire trees. Yet don’t see it as a complete loss. Turn that mess into treasure—with composting!

TJ prompted this post after dealing with a storm that made a mess of his homestead.

“I’ve got a lot of debris from the storm still, plus I’ll be cutting down some trees soon. What do you think is the best way to avoid exporting those nutrients and to reincorporate them into the soil? I was thinking on doing some hugelkultur beds, but I’ve never done one and might have too much material. Any recommendations on the hugel beds and other ways to make use of these materials?”

Here are my suggestions:

Method #1 for Composting Storm Debris: Throw it on the Ground

In Chapter 11 of Compost Everything: The Good Guide to Extreme Composting, I wrote:

“My dad and I started a food forest in his shady and infertile south Florida backyard. One weekend, we piled up palm tree trunks, branches, logs, hedge trimmings, leaves, grass clippings, and whatever else the neighbors were throwing out. The resulting stack of biomass was probably two feet tall and covered over a hundred square feet. In the middle and around the edges, we planted fruit trees and edible perennials. Within a couple of months you could dig into the pile and find rich black soil, worms, and a wide variety of insects working together to rapidly convert that pile of ‘waste’ into soil.”

This was what that mass of plant debris did: 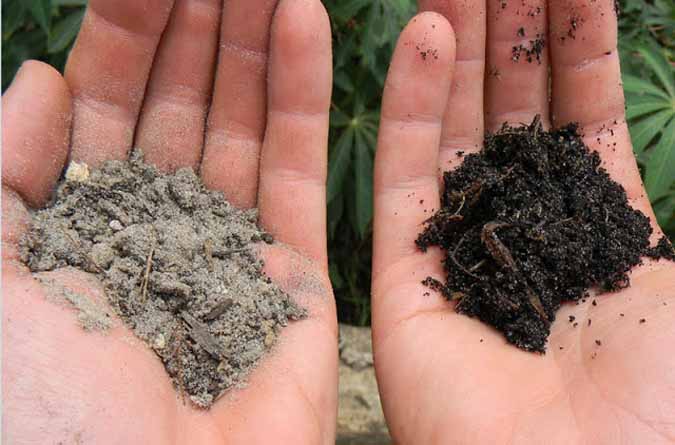 Just piling up all the trunks and leaves and debris will eventually give you rich results.

Stack them someplace out of the way or put them in rough piles right around trees or anywhere.

This pile broke down wonderfully in a little more than a year. 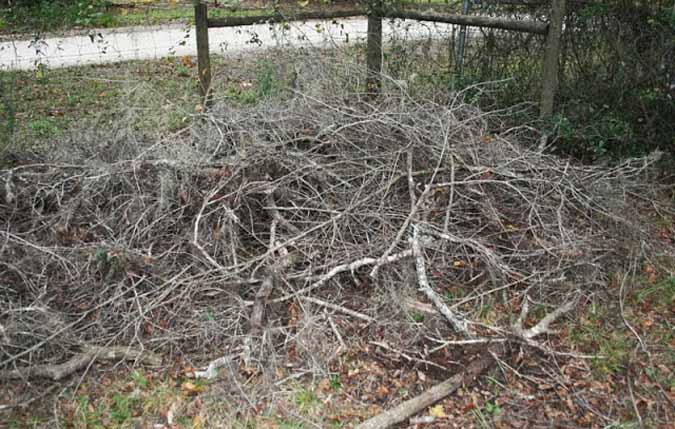 When the sticks got brittle, I stomped on them. Just don’t do that if you’re in poisonous snake country.

Method #2 for Composting Storm Debris: Use Logs for Boundaries

I’ve also taken felled trees and chunks of trunk and used them to delineate paths in food forests. 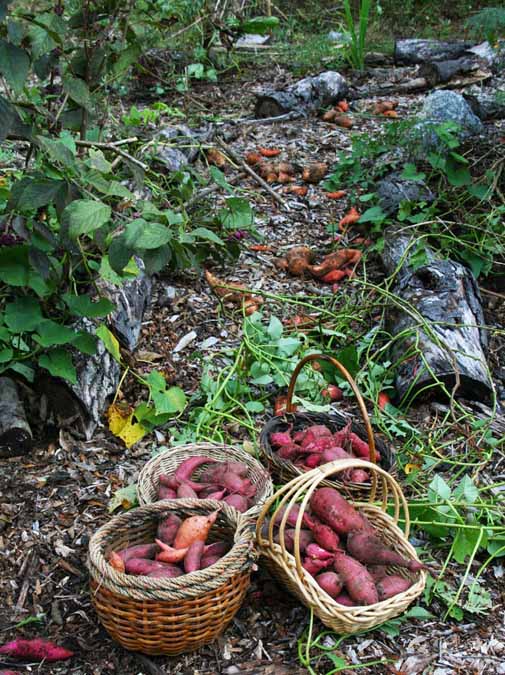 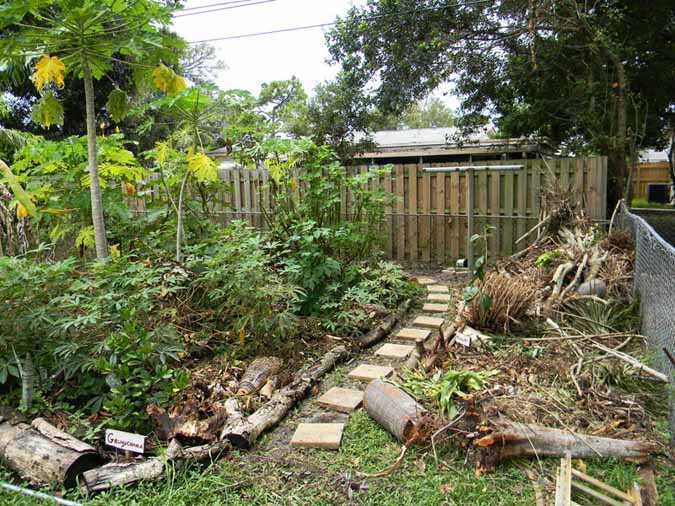 It’s not always the prettiest method, but those hunks of logs keep the ground moist beneath them, harbor a variety of useful species, plus host fungi, which are an integral part of forest life. 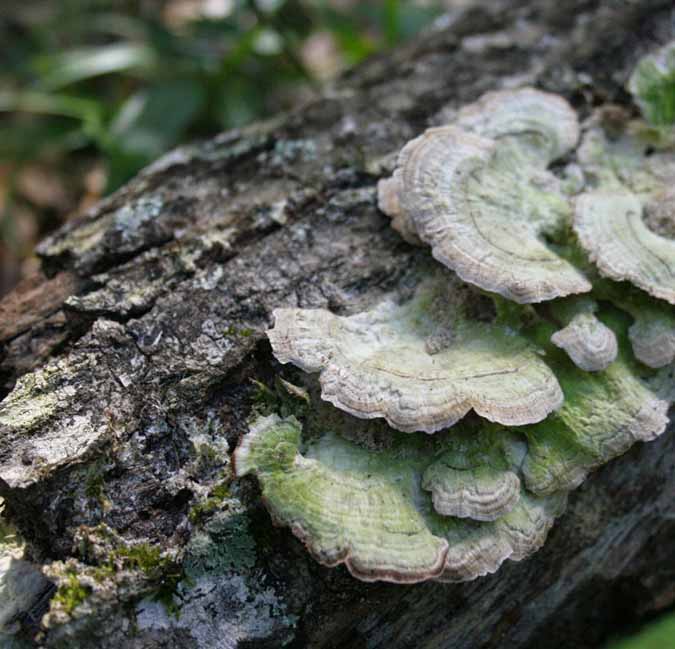 A year after throwing down piles of tree trunks and shredded tree company mulch, I was so amazed to see the many varieties of mushrooms that appeared that I did a post with 39 pictures documenting them.

TJ also asked about hugelkultur as a method for composting storm debris.

I must confess, I have never built a proper hugelkultur bed. I know it’s one of those super-popular things that permaculture gardeners do, but I haven’t done one.

I did bury tree chunks and plant a jaboticaba on top: 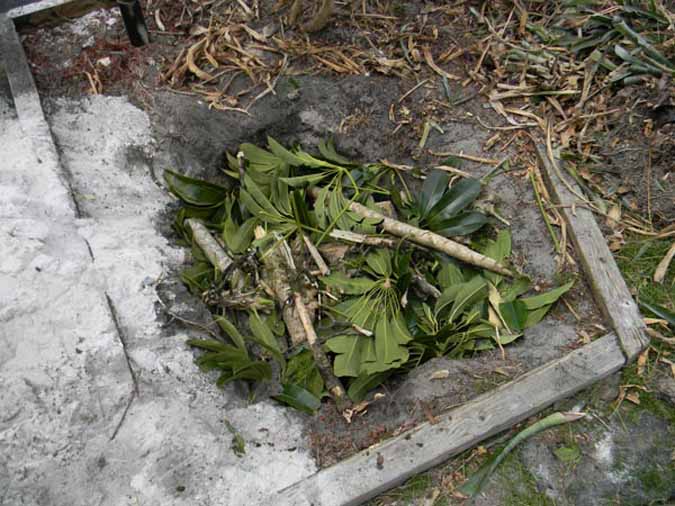 That led to sinking soil and the need to replant the tree within a year.

This was likely due to the hot and sandy soil of South Florida, rather than to a total failure in the method. Organic material deteriorates at a frightening rate and sandy soil is likely to wash away from the top of hugelkultur mounds. It’s probably worth building one as an experiment if you live in those conditions, but I wouldn’t bet heavily on a method that comes from a cold climate with clay soils.

And hugelkultur may not even be what many think it is.

As Jack Spirko writes in a very interesting article for Permaculture News:

“The purpose of this mound is twofold.

2. Grow annual production while No. 1 happens and/or grow short-term perennials and nurse trees for later planting in other locations.

How do I know this? When I met Sepp in Montana in 2012 and watched him build about 4 linear kilometers of hugels, he told me so and I believed him.

I hear cries of heresy and blasphemy, but I am just telling you the way this system is actually used successfully. So strap in if you are upset now. Indeed, it gets worse from here. The big shocker is what happens next. One of them you may have a hard time believing. . . .

1. The mounds over time sort of flatten and are left. At this point, the succession proceeds into long-term perennial production. The key, though, is that a few seasons of annual cropping and short-term perennials are used first. Generally in this case they remain bush, shrub, small-tree, herbaceous, and annual-crop producers.

2. More often than above, gasp! The mound is at some point spread out and full-on perennial systems are established or even grazing systems are boosted. This can produce astounding amounts of soil, the value of which (if trucked in) would be measured in 10’s of thousands of dollars per acre.

The primary purpose of hugels is building soil, production is of secondary concern. Getting production out of hugels makes the method practical but, nonetheless, still secondary to the original intent. Very few edicts to the concept are even aware of why Sepp Holzer did hugels in the first place. Quite simply, it was done because he had a ton of low-value trees around and removing them was more costly than their value.”

If the primary purpose of hugelkultur is building soil, the same can be done with much less labor than digging mounds requires. Throw the material in big piles and let it rot, then later spread it around. Florida’s hot and humid climate chews through most fallen trees in a couple of years, turning them into crumbly humus. If you build mounds, they are going to sink. Fast.

Charcoal has the capacity to hold onto nutrition and potentially act like humus in the ground. In sandy soils with high leaching, this is powerful. Humus disappears very quickly in Florida, and less quickly in colder climates, but charcoal is practically immortal.

I now add it to many of my compost piles for that very reason. 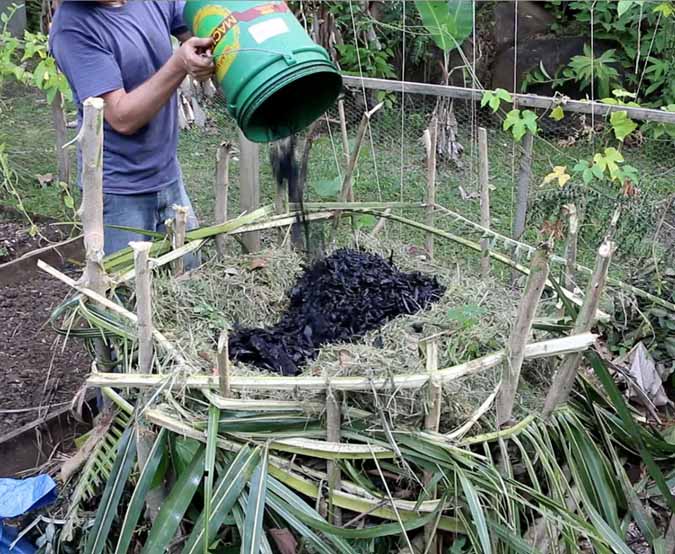 It will sit in the pile and soak up the good stuff, then later be spread around my gardens and trees.

If you have a lot of storm debris, just do something like this:

Then use that charcoal everywhere. Just don’t burn the trees into nothing—be sure you quench the fire and get the charcoal, as most of the good material will leave your property for the atmosphere if you let the fire go too long.

So, to answer the question, “What’s the best method for composting storm debris?”

Any way that keeps the material on your land. Don’t give into the convenience of letting the county take it or just burning it to ashes.

Trees are rich in carbon and other minerals that they’ve produced and mined from the soil, sometimes for generations. Don’t waste them. Even making islands of trunk chunks, leaves, and branches around your fruit trees will greatly benefit the trees.

As has been said before, “Forests grow on the remains of forests.”

Use fallen trees to feed living ones, and you’ll be surprised at how well they respond.