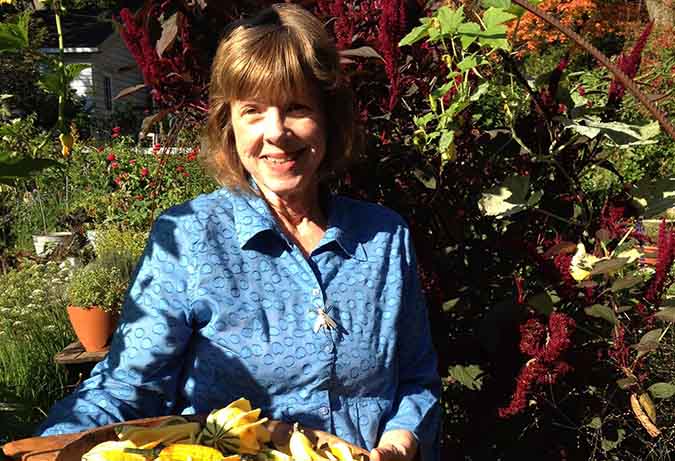 Fast Facts: There are more than 600 seed libraries in North America—including Vicki’s own Downers Legacy, home to 350-plus varieties of vegetables, herbs, and flowers.

Can you recount moments in your life when your penchant for permaculture and food security first took root?

I was a young girl when I fell in love with the natural world and all of its life. Since permaculture is a complex landscape design concept, I didn’t begin to absorb it until adulthood. Today, the feeling I get from living with a permaculture home and landscape is so similar to that love of nature that I felt as a girl. They both give a sense of security, a heightened awareness of your surroundings, a comforting feeling of abundance, a sense of order and peace, the authenticity of being a true human, a life with beauty all around, and a never-ending curiosity to discover the mysteries inherent in the natural world.

When I was a child, I was very fortunate to spend time with my grandmother. She loved art, birds, and flowers. There was something special between us that came out when we were looking at birds together. We would sit at the window with her special bird book from 1906 and watch the birds come to the feeders. She would help me note the colors and markings, the size of the bird, and the shape of the beak until we solved the puzzle and identified the bird—but I think she already knew the answer from the start!

Please tell us about your rather unique home in the Chicago suburbs. How does the design of your home and surrounding lawn mesh with your worldview on gardening and sustainability?

In 1979, I met my future husband, landscape architect Ron Nowicki. He was in the construction stage of a passive solar home that he had designed himself on the perfect south-facing lot in a conventional neighborhood. The lot was walking distance to the Chicago city train, the library, the movie theater, the grocery store, and lots of shopping. Ron had looked to many sources for energy conservation ideas—particularly accounts of how the early New England settlers got through their winters—and he was struck by the design of saltbox houses. He also wanted to build something fairly standard-looking so as to get along with the neighbors.

There has never been a lawn on our property. We covered the whole site with eight inches of wood chips to smother weeds before beginning to plant the big woody plants. We laid down a foundation of evergreen windbreak on the northwest quadrant, deciduous shade trees on the southeast and southwest corners, woody shrubs (like viburnums and hazelnuts) for birds, then woody fruit shrubs (including raspberries, gooseberries, and currants). Over the years, we have layered in many plants—like kiwi vines, pawpaw trees, and Asian pear trees—all the while planting annual crops with accompanying flowers to attract pollinators. It has been like a parade of visual delights, changing every year.

Today, you literally leave the world behind when you step into the south garden and immerse yourself in the colors, sounds, motions, and sensations within your line of sight. Soon, you lose track of where you are as your senses take over.

In 2012, you embarked on a life-changing journey to Italy for the Slow Food Terra Madre Conference. What influence did that trip have on your understanding of seed supply uncertainty?

Slow Food originated in Italy and works to protect and preserve high-quality and heritage foods. They are organized in small groups all over the world who gather and eat together. In the ’90s, I was working with Slow Food to help form one of these small groups in the western suburbs of Chicago. When the biennial Terra Madre event came around, I applied to attend as a suburban farmer (Ron and I qualified as farmers according to the FDA). After a long wait, I saw that my name had been selected! When I arrived in Turin, I was among farmers from 150 countries, from Polynesia to Iceland. Each country had brought along a regional food to share. Running alongside the conference was a grand exhibit for the public that drew hundreds of thousands of Italians and other tourists. It was the Salone del Gusto! There were 1,500 vendors, each with samples of their unique artisanal foods to hand out, including wine.

During that week, I attended Vandana Shiva’s lecture, where she spoke urgently about the decline of open-pollinated seeds. These varieties will be greatly needed if climate change forces us to create new varieties of crops to adapt to new weather conditions. In fact, breeders are already doing that. Listening to her, my heart stood still and the color drained from my face. I looked around the room at the seasoned faces of the other farmers, suddenly realizing that they were growing on the land of their ancestors—and their special family seeds had been passed from generation to generation.

I now saw for the first time that these farmers were not primitive; they were wise. And we Americans are so obsessed with the consumption paradigm that we can’t even understand that we are actually consuming the Earth itself.

I came home from the conference determined to work now for something that would really make a difference. I embraced the vanishing heirloom seeds, because their extinction leaves us without so much information about our personal human history and culture.

How did the Downers Legacy Seed Library first spring to life?

Well, that’s easy! I got home from Italy and just started to talk to everyone. I went up to Seed Savers Exchange (SSE) in Iowa to visit my friend David Cavagnaro, who has worked with the exchange almost since the beginning. He was very enthusiastic about getting the heirloom seeds down into the Chicago area, and the idea of opening a seed library came to mind. But how could I do it in my town?

Once David and SSE gave me some seeds to get started, I secured space to house them, so people could check them out. People always ask, “How the heck do you borrow a seed?” The process at seed libraries across the United States is about the same:

Can you share some seed success stories and memorable moments you’ve experienced through your seed library?

In 2013, no one had ever heard of a seed library. So we sent out e-mails to everyone we could think of inviting them to a seed-saving orientation. When the day arrived, we were amazed when 120 people showed up. We found out quickly, though, that fire regulations restricted us to only 25 people at a time in our space. So I had to give my program four times! Luckily, in 2016, our public library finished its renovations and called to invite us to display in their facility. It is wonderful!

One story that really stands out for our group is that of the Inciardi paste tomato.

I was visiting a friend’s front garden one day in the early ’90s when an older neighbor with a weathered face came up to us. He asked for my hand and placed in it a large paste tomato that actually made me blush.

“Thatsa the only tamato my family ever grew,” he said. Then John Inciardi told me the story of his father, Henry, who came from Sicily in 1900. He was one of seven brothers. All they wanted to do was find a job, get married, rear a family—and raise the food that had come with them from the old country. Well, Henry married Antoinette and got a job with Western Electric. One day in 1915, his company was hosting the employees for a picnic cruise on the Eastland steamer leaving from the Chicago Harbor. With 1,500 passengers on board, the boat rolled over into the river. Sadly, more than 800 people drowned that day, including Antoinette. Henry managed to swim up to the top and survive, and eventually went on to remarry. He and his new wife had John, who later brought their Sicilian tomato out to Downers Grove and gave it to me that day.

I have continued to grow that wonderful heirloom paste tomato and, when I started the seed library, we got a lot of publicity over it. I named the tomato Inciardi’s Paste, and it was nominated and confirmed for the Slow Food Ark of Taste. The director of the Eastland Disaster Historical Society also packaged it as a giveaway for the museum, and many stories and articles were written about it. Then, one day, I got a text from John’s niece, Annette Inciardi, from Texas. She sent me dozens of family pictures, including some from the early 1900s. Now that was a really fun experience—I was just thrilled about the whole thing!

You’re also a vegetable gardener for hire. Any stories from the field?

It is truly the joy of a lifetime to help someone learn to grow their food. This should be a birthright. Of all the environmental fixes that can be done for the Earth, growing food is the overall best for energy and water conservation, and chemical reduction. Eating the harvest can also greatly improve our health and the health of the economy. The gardens that we’ve created—especially for families with children—have been so gratifying. Parents are usually very excited to see their kids learning about the food and wanting to take part.

If you could share your permaculture mission with everyone on the planet, how would you put it into words?

Ron and I think of permaculture more as a state of consciousness. It is the way we think, the way we shop, and the way we talk to friends. It’s like that old joke about a British accent. If you woke us up in the middle of the night, we would still ask you if you know a good way to do a fruit guild with a peach tree!

In the end, our mission is to teach others about the moving parts and demonstrate how permaculture looks and works.

It’s all about life! We are trying to sustain life on Earth simply by growing living things and encouraging a living soil. If soil is neglected, life-giving food will not get what it needs.

Can you offer a specific piece of gardening or healthy living advice that would be of interest to our Grow Network community?

When you are first starting out, be kind and gentle with your soil. It is full of small organisms that are pairing up with your plants in very specific ways. Put the rototiller away for a while. No walking on the plant beds where you might crush the organisms. Put a soft blanket of compost or mulch over the soil after it gets really hot. Soil is like us. It needs to stay a certain temperature and a certain moisture level. Harsh, artificial chemicals will kill off what’s in there and have no long-term benefit. Carefully add some slow-release, organic granular fertilizer. And when your soil is thirsty, give it a long, slow drink until it has had enough.