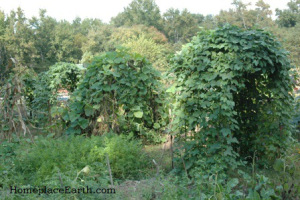 Last year I grew pole lima beans for the first time. I had several tall bamboo tepees in a garden bed with a bamboo pole connecting them along the top. The plants grew up the poles and along that top bar with a mass of foliage. I felt the urge to step into the welcoming shade, but I would have had to step in the bed. That’s when I had the idea to grow them so they would grow over a garden path, rather than the garden bed.

My large garden is divided into four sections of nine 4’x20’ beds each, with a 4’ wide grass path between each section. I decided to connect five pairs of beds with trellises over the path between two sections.  Each trellis was made with four metal t-posts and a 16’ livestock panel. The posts were put at the corners of the beds and the fence panel was bent between them and attached to the posts with wire. I use old electric fence wire for things like that. You could put all four posts in at once, then with a helper, bend the panel and slide it between the posts. Or, you could put in three posts, add the panel, then sink the fourth post and adjust the panel. I wrote about using these livestock panels many ways here.

It is no trouble to bend them into shape. Just anchor one end against something (a post or a person) and pick up the other end and walk forward. The 16’ long panel made an arch 7’ tall over the 4’ wide path. At 52”

wide, this trellis is slightly wider than the garden bed, which is why I didn’t trellis every pair of beds along that path. It would have been too crowded getting in and out of the 1½’ wide paths between the beds.

In deciding what to plant over these trellises besides lima beans, I chose luffas and bushel gourds because I knew they would put out lots of vines that would last till frost. It is interesting to try new crops, so I also chose Malabar spinach for one of the trellises. Friends and family who had grown Malabar spinach told of how it climbed over everything in their gardens and I imagined I could just go out and pluck some leaves as needed for dinner from a trellis as I strolled through the garden. I learned that the variety that climbs over everything is Red Malabar. The variety I bought was green and didn’t do much climbing. I still took a walk in the garden and picked for the dinner table as needed, but next year I’ll be planting Red Malabar to fill out the trellis.

The luffas performed as expected, covering the trellis in a hurry. I will be harvesting 20 luffa gourds from one trellis! The plants only occupy four square feet of garden space—a 6” strip along the end of each bed. The luffa trellis has many yellow flowers poking out the top right now, although it is too late for the flowers to do anything but beautify the garden—which they are doing very well. One year I grew luffas along a fence and measured a vine that was 20’ long

I knew bushel gourds were good for lots of green vines. In fact, if you don’t watch out, they can get away from you. I had some growing 10’ into the beds on each side of the trellis before I cut them back. I let them go a little wild and some vines hung down so far over the ends of the trellis into the path that under that trellis would have made a good meditation shed or a children’s playhouse. As a bonus I’ll have five large gourds to play with. I finally cut the overhanging foliage with a machete and fed it to the compost pile. The luffa and bushel gourd plants will stay green until the frost kills them. Winter squash would probably finish earlier. That could be an advantage if you grew them over a trellis such as this, but then wanted them to be gone so you could cover the trellis with plastic to make a winter greenhouse. Seminole squash vines are pretty prolific. The description for Seminole in Southern Exposure Seed Exchange (SESE) catalog subtly warns about that when it says to give it “room to roam”.

This all started with lima beans. The variety of pole limas that I grow are Worchester Indian Red Pole. The description in the SESE catalog designates it as the hardiest lima and says it is heat and drought resistant. These are the ones I grew last year and saved the seeds. I let the seeds dry in the pods on the vines, so I haven’t picked any yet, but they will certainly be easy to see and pick. This has been fun this year and I’m already looking forward to doing it again next year. It is rather magical to walk under these trellises in the garden as I go about my regular work. I enjoyed the shade in the paths and didn’t notice any problems with shading in the beds because of the trellises. I already had these fence panels and old t-posts left from other projects. Buying everything new could get pricey, so use what you have, but make sure your trellises are sturdy. If you want to try this next year, plan for it now. In fact, as you clean up your beds and plant cover crops, put the trellises in now so they’ll be ready. I hope you have as much fun with this as I did!

This article was originally written for Cindy’s blog at www.HomePlaceEarth.com