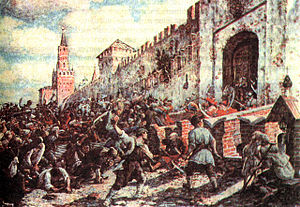 The Cause of Riots and The Price of Food

Over the years I’ve watched time and time again as the US Gov’t passed laws that reduced personal liberty, violated the constitution, or blatantly transferred more wealth to the already wealthy.

At first I naively thought, “wow, this is outrageous, surely going to cause a riot”. But no, nothing really ever happened. Maybe some protests, some demonstrations, or a bit of debate by the talking heads on t.v., but nothing really.

I continue to watch as more and rights are eroded away, more and more money printed, and the US Gov’t continues to get bigger and more powerful.

It just goes on and on. I figure Alex Jones is a prime candidate for a heart attack (and most likely it will be on the air) as he communicates atrocity after atrocity.

Surely people must be outraged?

The Tea Party and the Occupy movement have some spunk, but nothing really in comparison to the magnitude of the crimes. The powers that be seem to be able to do anything they like and people just continue to roll over and no one really cares.

I often wondered – just what does it take to make people really revolt?

What does it take to get the attention of the average Joe on the street?

What is the tipping point that will really bring this whole thing to a head?

The answer to the question “what makes people revolt” is stunningly simple, and profoundly prophetic. I am sure the children born into royalty are taught this very simple principle in kindergarten. World leaders certainly understand it. And CEO’s of large multi-nationals figure it out early on in their careers.

The answer came to me one day when I stumbled across an article published by MIT’s Technology Review where researchers at the Institute of Complex Systems published their results on the question; what is the cause of riots? The study was headed up by Marco Lagi and his associates. Lagi thought the answer to the question of what was the cause of riots would be, well, complex. He does work for the Institute for Complex Systems after all. But Lagi and his associates were surprised when it turned out the cause boils down to one thing.

The price of food.

Yes, the price of food.

Note that the price of food is not necessarily the reason for the riots – but it does create the conditions when rioting will break out.

It makes a lot of sense. The average Joe is only really going to get upset when he is hungry. As we’ve seen, when Joe is well fed, well nothing really bothers him too much. But when Joe is working as hard as he can and he can’t feed himself or his family, and there is no other recourse…

There is an old phrase created during the time when the Roman Empire was sliding further and further into dictatorship which speaks to this truth; give them games and bread and they will never revolt.

Lagi and his group at the Complex Systems Institute created a model based on food prices and plotted that against outbreaks of rioting. The model is surprisingly direct. And they got pretty good at predicting when trouble would come. In December of 2010 the model indicated that, based on increases in food prices, there would be uprisings in the Middle East. Lagi and his group tried to contact the US Gov’t to warn of the dire predictions, but well, just who do you contact in the US Gov’t? So their letters went unheeded. Within a week of when the model predicted, Mohamed Bouazizi set himself on fire in Tunisia in protest at government policies. And a series of revolutions followed suit.

Turns out the United Nations also knows this. As food prices increased in 2008, the UN publicly warned that rioting and unrest would increase throughout the world. The UN FAO (Food and Agriculture Organization) tracks and graphs world food prices, which by the way, is a much better indicator of costs than the overly-manipulated CPI (consumer price index). Currently, the UN FAO price index is trending down slightly, but is still very near the 2008 peak.

As you know, the cost of food is steadily increasing. And the increase is going up faster than the usual few percentage points we’ve all come to accept. The most profound thing about Lagi’s work is that he plotted out the current trends in food prices and his model predicts that by August 2013, if food prices continue to rise at the pace we’ve seen in recent years, the entire world will be in civil unrest. That means that within a little more than a year, even here in the United States, prices will have crossed the threshold and Joe is going to be very, very upset.

So if you are like me and you’ve been wondering what would trigger this crazy situation we live in to come to a head, you don’t need to go any further than your grocery store to get an idea of when it is coming. Many people have asked me why I am so passionate about backyard food production and helping people to grow their own groceries. There are so many areas to work on once you decide to start getting prepared: defense, medicine, communications, transportation… And while I certainly encourage you to get some basics in all of it, (yes, I love my Glock, herbal remedies, and my bicycle) I always was driven to work on the problem of how an individual can feed themselves and their family.

I intuitively knew food would become very important as time went forward. There are so many problems with the commercially available food. Having a clean, healthy source of food is so important, and especially these days. But I really had no idea that food would likely be the linchpin to the revolution.