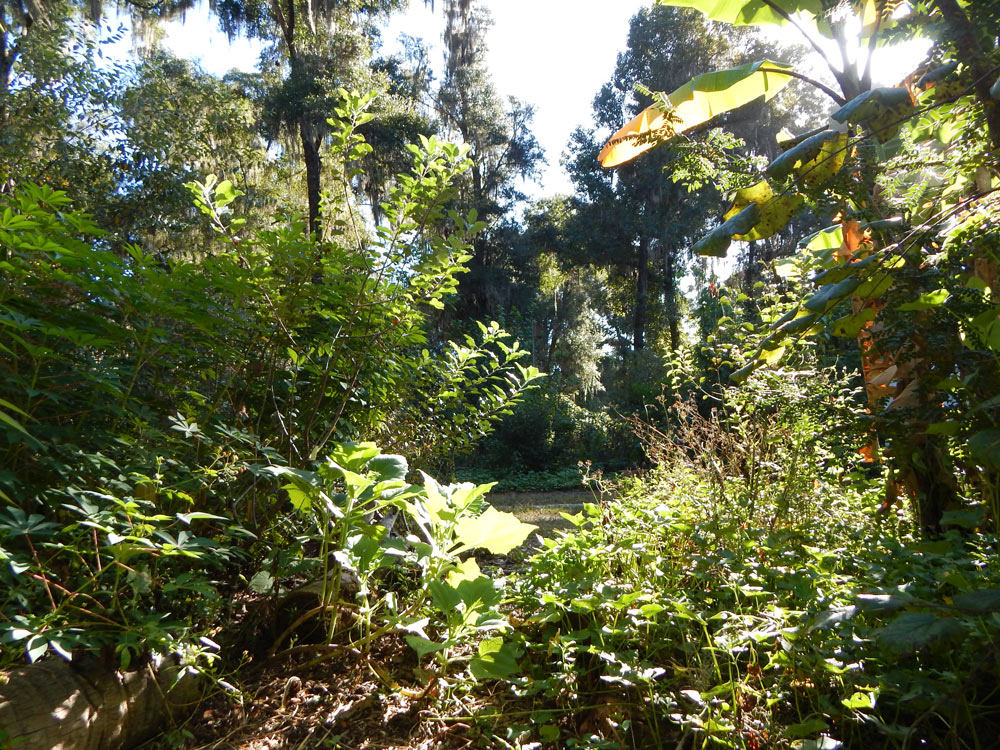 What Is a Food Forest? (And How to Start Growing Your Own!)

After four frustrating years of renting, I am now planting my third food forest. My first one was planted in North Florida, followed by a simultaneous food forest project in suburban South Florida.

Both of those projects are still thriving, almost 10 years in. My new project is in the equatorial tropics and was started on July 20, 2019.

Along with planting my own food forests, I’ve helped many other people get started on their own. Some are big, multi-acre projects; others are tiny backyard plots. Some are regimented and orchard-like, others are free-flowing, messy extravaganzas.

Whatever your personality, if you have a little space of your own, you can plant a food forest.

What Is A Food Forest?

A food forest is a deliberately planted arrangement of mostly edible trees and plants, mimicking the layers and interactions of a natural forest but designed to feed people.

As I write in my little book Create Your Own Florida Food Forest:

Robert Hart’s ground-breaking food forest orchard contained seven layers, much like a wild forest. This was adopted by Bill Mollison, Martin Crawford, Geoff Lawton, and others, then tweaked with the addition of nitrogen-fixers, palms, and other elements (…)

The canopy layer consists of your tallest trees. This can vary according to the size of your land. If you have lots of space, you might plant very tall trees. In a small backyard, your canopy layer might be no taller than an orange or a dwarf mango tree. (…)

Beneath your tallest trees is a “low-tree” or “sub-canopy” layer of fruits, nuts and other edible species. These are shorter trees that can be tucked in around the big guys (…)

This is a layer of perennial vegetables and herbs. You can really pack these guys in around the trees and shrubs, using whatever space is available.

This is a fancy way of saying “a root layer.” This layer overlaps with your herbaceous and shrub layers, along with the yet-to-be announced vine and ground cover layers.

(…) the ground cover layer may be somewhat seasonal since the frost often takes it out, but (…) you can plant sweet potatoes, oregano, mint and other plants that creep along and also produce food. Your main ground cover in some instances might just be thick mulch to keep the (soil) from being too infertile.

The vertical layer, also known as the vine layer, consists of vines and creepers that use your other trees and shrubs as support.

Depending on your climate, the plants you pack into these layers will differ.

Where I live, I can grow mangoes as the top canopy, with cocoa and coffee below. I can then use cassava, bananas, and Surinam cherries for the shrub and rhizome layer; sweet potatoes for ground cover and more roots; and air yams, vanilla, and passionfruit as the vining layer.

In the middle of the US, you might instead plant pecans as the top layer, with apples and pears and peaches beneath them; then, layers of smaller plants like Jerusalem artichokes, Nanking cherry, blueberries, and blackberries; then mint and herbs and horseradish; with currants and grapes and gooseberries for a vining layer.

It’s a lot of fun to plan out what you’ll plant in a food forest. There’s a space for almost anything you can imagine. Instead of having trees in boring rows, you can plant them all over with paths in between, then plant out shrubs and vines and herbs and even annual gardens in between, mimicking a wild, natural system.

Some people love to lay out their food forest plans on paper, sketching where they want everything to go. I don’t. I would rather plant a ton of things and let the system evolve over time.

I find it easiest to plant my canopy trees first and work out from there. You can see me doing that in this video we filmed on the day we planted the first trees in our new food forest:

Once those are in the ground, then you can work out from them. You can just plant regular gardens around them when the trees are small but, as they grow, the light will decrease and that will no longer be possible except around the edges or in cleared spaces.

When you first plant, make sure you’ll be able to keep your new trees watered. Where I live, people plant fruit trees at the beginning of the rainy season and let the rains grow their trees. If you live in a drier climate, you can add some irrigation or just do what I did in North Florida and drag a hose around and spray everything a couple times a week. Regular watering in the first year will get your trees growing and happy.

The important part is to get your canopy started and keep those trees happy. It is also a very good idea to plant nitrogen-fixing and biomass species you can “chop and drop” as mulch to feed your food forest. Nitrogen-fixing trees have nodules on their roots formed by bacteria that can take the non-reactive nitrogen in the atmosphere and turn it into a form plants can use for growth. Planting trees with this ability will add more nitrogen to the ground. As they grow, you trim and chop and cut them, throwing the branches and leaves down around your fruit and nut trees, adding nitrogen and mulch to the soil.

Another thing that helped my first 2 food forest projects was the liberal application of mulch around my trees. I was able to get lots of wood chips dumped by a tree-trimming company. At the same time, I got lots and lots of rotten produce from a grocery store. I threw both around my trees and they really took off. Trees without mulch grew much slower and took longer to fruit.

When you start a food forest with the canopy trees, treat them like the poles of a tent. Everything else moves out from those supports. Don’t be afraid to plant like a madman, throwing seeds and cuttings and trees everywhere. Later you can thin things out. The worst thing you can do is plant a couple of trees out now and again in the middle of a big expanse of grass, then think about what you’ll do next… then maybe plant a couple more the next year… then think some more….

I know people that did that. They still don’t have decent food forests after years. Plant more—then thin as needed. You’ll be glad you got trees in the ground early!

Just don’t plant your canopy trees right on top of each other, or they’ll slow each other down. Going too thick right at the beginning isn’t a good idea.

Once final thought: Just because a tree CAN grow to 60′ in height doesn’t mean you have to let it get that big. You can maintain many trees at shorter heights via judicious pruning. If you don’t, your food forest may end up too shady, which will make it unproductive. If you do plant close, you’ll need to come through and prune a few times a year. I like to do this, as keeping fruit in reach is worthwhile, plus all the prunings make good compost and firewood.

This spring, why not set aside a little space for a beautiful forest of food? I’ve greatly enjoyed my food forests over the years and highly recommend the method. Unlike a bed of corn or peas, a food forest will produce food for decades or even centuries.

Not to mention that it makes for a lot of lovely greenery: 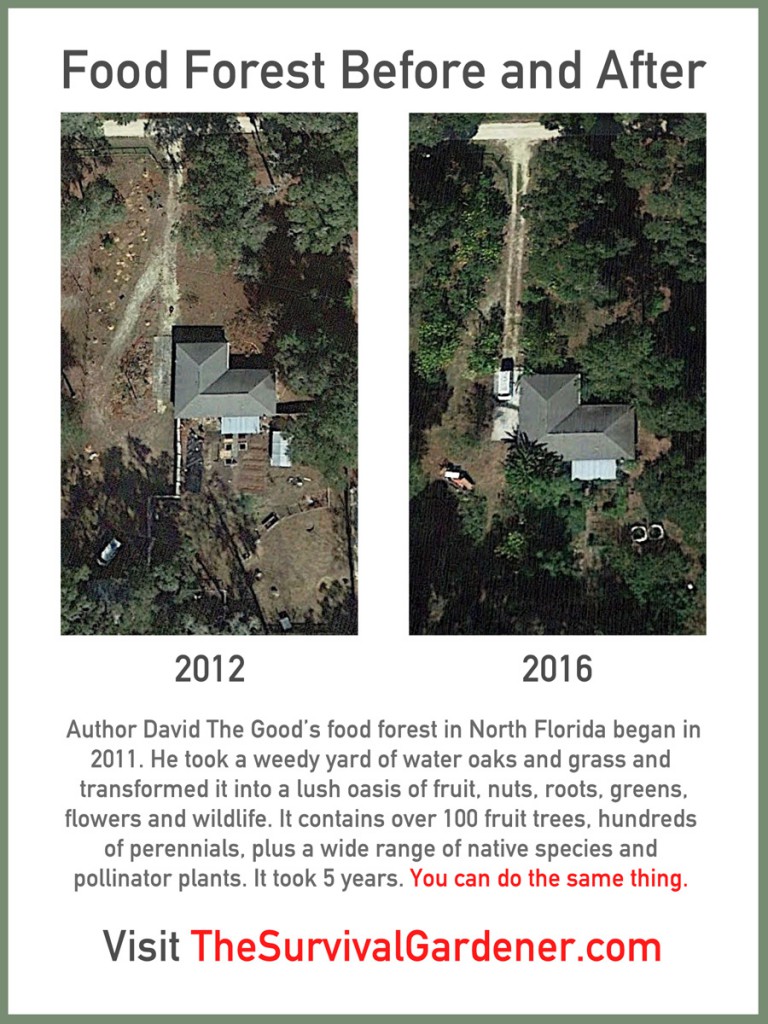 That’s my kind of gardening.