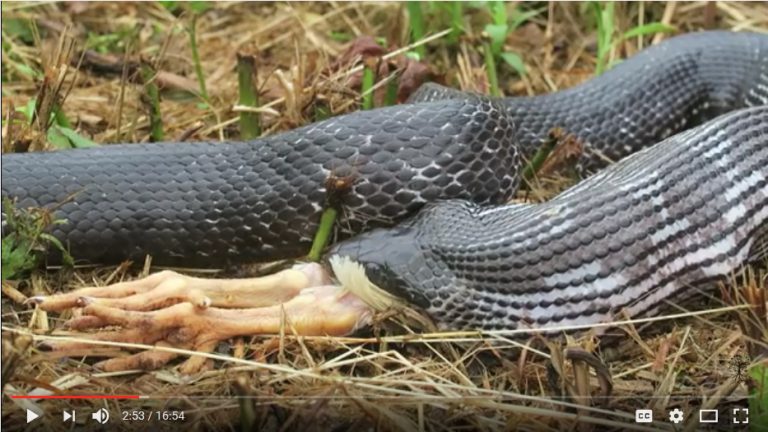 This Snake Ate My Chicken Alive!

They say everybody loves chicken, and it turns out that holds true for our slithery neighbors as well. Justin Rhodes went out to check on some meat birds he was raising up, and there in his pastured poultry pen he made a disgusting discovery.

A black snake had wiggled its way into the poultry pen, and Justin caught it “red handed” so to speak. When he arrived, the snake was in the middle of swallowing a young bird whole – with about half of the chicken’s body still visible and the other half already down the snake’s throat.

Read more: How I Got Bitten By a Venomous Snake, Treated It at Home, and Lived to Tell the Story

It’s fun to see Justin’s kids react to the site of the snake swallowing a whole chicken. They were a little bit freaked out, but I think they took it pretty well. Luckily, Justin had his camera handy and he caught the whole thing on video.

The snake is probably 5 or 6 feet long, and he’s right in the middle of eating this chicken. When Justin disturbed the snake, it started to spit the dead chicken out. But he didn’t want to let the bird die for no reason, so he left the snake alone long enough for it to finish swallowing the chicken. There’s some great footage here – and you can watch it all play out as the snake works the chicken all the way down his throat.

Back to the Daily Grind

After the snake fiasco had played out, Justin got back to his daily routine. You can watch him move his pastured poultry pens – it’s cool to see how easy his pens move around. Then Justin spends a little time feeding the remaining young broilers, and he shows you a few different types of feeders that he uses.

The last chore of the day is moving his flock of laying birds. Justin uses chickens to cultivate and fertilize his garden soil – and in this video he’s moving the whole flock to a new plot of land that he plans to plant as a seasonal kitchen garden soon. He uses an electric poultry netting that’s easy to move, and his coops are all on wheels, so the whole process doesn’t take too long and it’s a great example of how to keep your birds moving at pasture. Here’s the video: