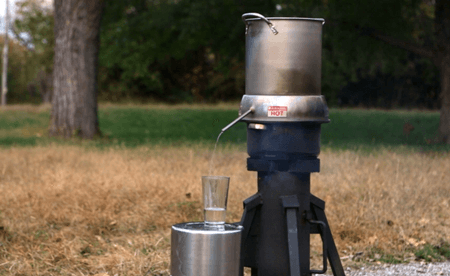 Years ago I heard about this guy, Glenn Meder, who was working on developing a simple, inexpensive way to distill water in an emergency situation.

This made so much sense to me that I immediately sent Glenn a contribution of $100 to help his research along . . .

. . . Because one of the biggest things we Americans take for granted is clean drinking water.

(By the way, Glenn succeeded in developing his Survival Still. For more details, you can go ahead and click here.)

Yeah, we complain about fluoride, or too much chlorine, and they are issues. But those problems are nothing compared to the vast majority of humans on this planet who have to work very hard to get even a glass of clean water.

If you ever get to hear that interview I did with Fernando Aguire (the guy who survived the Argentinian collapse), he tells a fascinating story of how quickly municipal water sanitation deteriorated in Buenos Aires. When the people didn’t have money to pay their water bills, maintenance fell by the wayside. Water quality plummeted. It led to an unprecedented amount of disease in what used to be a first-world city.

Fernando said it was shocking how quickly the public water systems deteriorated.

Thankfully, there are many ways to purify water. The best, by far, is distillation. So a simple, rugged water-distillation unit could be a lifesaver in any kind of emergency.

Of course, I wanted to see this get developed and made commercially available! So I was really excited when Glenn told me the still was ready.

Review of the Survival Still Workshop

Glenn has a very informative online workshop that teaches you the Red Cross recommendations for purifying water. I really liked Glenn’s simple and easy-to-understand explanations.

Glenn goes into detail about the three water-purification methods the Red Cross recommends:

The best part of the workshop is how Glenn spends a lot of time explaining why the Red Cross makes the recommendations they do. Lots of great insights there.

Anyway, after watching the workshop I felt that, yes, I really had a much greater understanding of the most significant dangers and of the best methods for treatment.

The box came, and as I unpacked it, I was impressed with the sturdiness of the still components. Yup, these would last a very long time.

I got the complete package that includes the two pots (you can opt for simply buying the still alone without the two pots). These two pots are also stainless steel and adequate for use on a controlled fire such as the gas stove or grill I would use.

I know from experience cooking on open wood fires that the thinness of the lower pot provided would not work well at all on an open wood fire, or even on coals. Almost all modern cookware is so thin that it isn’t useful for rugged outdoor cooking. In a grid-down situation, wood fires are likely to be the method of choice for cooking.

Since this still needs it, you should plan on having a source of propane or other fuel that provides a stable, controllable heat.

And, my recommendation is to stock up on cast iron cookware, which cooks well in crude heating/fire situations.

Anyway, pots aside, the still is really sturdy.

Also in the box were the directions. And, as promised, the five sets of laminated Red Cross pamphlets.

I am not much of a directions reader and it looked to be mostly full of warnings that seemed to contradict operating it. So I tossed that aside.  (Turns out, the directions say you should only use this system on a controlled heat source—which puts open fires or coals out of the question. Just be prepared for that when the grid goes down.)

Testing Operation of the Survival Still

When I tested the Survival Still, it was the end of the summer and my family had given up on the pool quite a while before, so the water looked perfect for testing out the still.

It was seriously yucky. Dark brown. Stuff floating on top. Including dead insects . . . .

As recommended, I scooped out enough for both the lower pot and the top pot.

I first tested the system on my stove in the kitchen, but it didn’t produce anything. My husband and I scratched our heads, and we thought that perhaps it needed more heat? Glenn had mentioned in the webinar about “pushing it” and getting production to more than a quart per hour. Did “pushing it” mean using more heat?

Besides, there was some kind of warning about “don’t do this indoors” in the instructions that I had tossed aside.

So I got out the grill on the patio, and I went through the entire process again.

Here  is what I did:

We did see steam coming out of the “straw,” but no water dripping out. We figured it wasn’t condensing.

I tried it again (with new cool water in the top). In the middle of the process, I swapped out the top pot with cooler water (the top gets surprisingly hot). This was to try to help the condensation.

So, you’ve no doubt heard the saying, “When all else fails, read the directions.”

Well, reluctantly, I did. But I couldn’t really find any help there.

Was it too hot?

Spending some more time trying to troubleshoot the operation, I noticed that some steam was coming out of the junction where the straw meets up with the collector.

I guess I didn’t have it set tightly enough.

And wow, once I got it set correctly, the still just purred along very nicely. Beautiful, clean distilled water came out of the straw.

And yes, I drank a glass full of the distilled water. It tasted a bit flat, but was otherwise fine.

So the big lesson here is, always test your equipment before you need it.

If I had this problem under the duress of a real emergency, it wouldn’t have been any fun at all.

Recommendation For The Survival Still

Overall, this is a really great product for emergency water distillation. And distillation, by far, is the best option when you are concerned about getting clean water.

The still is well constructed and well designed. It is rugged. The laminated copies of the Red Cross recommendations that come with the set are really great to have on hand and to share as Glenn recommends.

Really, there are only two drawbacks to keep in mind with this product:

I do highly recommend the Survival Still as an emergency backup method for turning almost any kind of nasty water into safe drinking water.

(This review was originally published on October 7, 2014. It was updated before republication.)