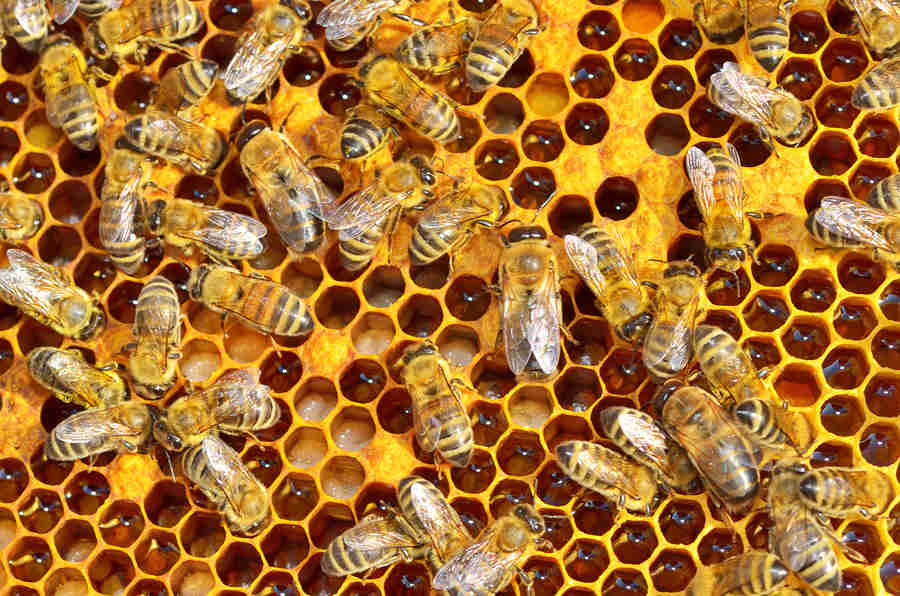 Got a minute for a little science today? So, there’s this stuff called vitellogenin that is part of the yolk in most eggs. Vitellogenin is one of the first proteins that form in an egg yolk – the latin “vitellogenin” roughly translates to “yolk maker.” It is present in the eggs of nearly all egg-laying animals and insects – birds, bees, amphibians, reptiles, and most invertebrates. Scientists have studied the stuff since the 80s, but they had never figured out exactly what it does – until now.

Last friday, some researchers from Arizona State University published findings from a study that shed a little light on what this mysterious protein does. They were studying the immune system of the honey bee when they made this discovery. It seems that the vitellogenin protein is a natural method for mothers to pass on immunization to their young. It’s a little something like “natural vaccination.” Here’s how it works:

How Bees Vaccinate their Young

Worker bees go out into the world to gather pollen. While they’re out there, they pick up bacteria from the plants and surfaces that they contact during their work. The workers bring their pollen back to the hive and make it into “royal jelly.” The queen eats the royal jelly – it is something like a perfect food at about 12% protein, 5% fat, and 15% carbohydrate with tons of amino acids, minerals and vitamins. It also contains plenty of pathogenic bacteria – little samples of all the bad bacteria gathered from all over the hive’s foraging range. It’s bacteria soup, literally.

So, the queen inadvertently eats a sampling of all the bacteria from the entire area where her workers are working. This is where the vitellogenin comes in. This protein binds with tiny pieces of bacterial cell walls, and it is then carried through the queen’s blood stream and introduced to the developing eggs. The embryonic bees have their immune systems primed with a sampling of real world bacteria. Through this mechanism, all of the queen’s offspring are “vaccinated” against the bacteria they will likely encounter during their lifetimes.

While this new knowledge is exciting and important, it’s also pretty scary. I wish I could tell you that the scientists stepped back from their research, patted each other on the backs, and said, “Good job. Now that we understand how this natural process works, we can respectfully observe it and continue to learn about it.” But I can’t tell you that. After reading the ASU post on the subject, we can assume that that conversation went more like this, “Good job. Now let’s start manufacturing synthetic bee vaccines.”

At first glance, personally, synthetic bee vaccines seem like a bad idea to me. These would introduce a dependency on humans, and would signal a departure from the natural stasis of bee immunity. Science may know a few bacteria that are acting as parasites of the bee today, but science cannot predict the future of bee parasites. Synthetic immunity could leave the bees susceptible to future changes in the bacterial universe that science does not anticipate or understand. Immunizing the bee against a parasite forcefully, rather than naturally, could have any number of unintended consequences. Unintended consequences could play out directly in the hive among the bees, or indirectly – in the microbiome, among bee predators, or among the flowers that host the bees – just to throw a few possibilities out there.

The Implications of Understanding Vitellogenin

Now that bee scientists have learned about the importance of vitellogenin, it will be interesting to see how this knowledge trickles down to specialists who study other egg-laying animals. On the bright side – we could learn a whole lot about bacterial immunity in different ecosystems, among different animals. On the other side – scientists might start to manufacture synthetic vaccines for a whole slew of sensitive creatures, and unintended consequences could reach far beyond the bee hive. I expect that both of these possibilities will be true – we will learn a lot about how natural immunity works, and we will fiddle with these natural processes without any understanding of the broader consequences.

I’m also curious to see if this new bit of knowledge will have any significance for the immunity of human beings. We have the benefit of carrying antibody proteins in our blood – a luxury that bees don’t have. Human moms pass antibodies to their young through breast milk, kick-starting the baby’s immune system during infancy. Scientists believe that lactation arose in mammals at the same time that yolk-production ceased, over 100 million years ago. Scientists have identified dormant vitellogenin genes in humans, dogs, and armadillos – all milk-producers. It will be interesting to see if we learn anything about the bacterial immunity of humans as a result of this new finding about bees. Time will tell, and I’m sure it will be an interesting story to follow.

The study was published in the journal PLOS Pathology, you can read the original publication here: PLOS Pathogens: Transfer of Immunity from Mother to Offspring Is Mediated via Egg-Yolk Protein Vitellogenin

You can read the announcement from Arizona State, complete with their commentary, here: No shot needed, bees vaccinate their babies naturally