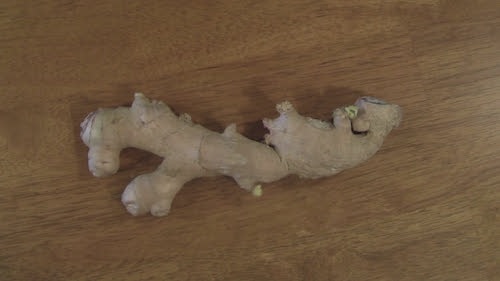 Learning to Grow Ginger and Turmeric in the Midwest

As the mother of four wonderful children, I have been active in the nutrition and wellness arena for over 20 years now. I start every morning gathering the ingredients I need to make several different smoothies for my family. I have studied herbs over the years, and over the last year I have incorporated lemons, ginger, and turmeric.

I decided last December to find out if I could successfully plant and grow ginger and turmeric. These plants are not native to the Midwest, and therein lay the challenge. I bought turmeric and ginger root from a local organic grocery.

I allowed the ginger to set out and protrude into small bulbs before planting them about an inch below the surface of the soil. I have 2 ceramic planters on my front porch, which faces east, so they get the morning sun and about 4-6 hours of daytime sun exposure. These planters also have the cover of the porch during inclement weather and can be pulled back toward the house when needed.

I planted the turmeric directly in its own pot with the same sun exposure, also about an inch deep. I will say that patience is needed for both plants. As the first few months went by, I waited to see the first signs of growth peering through the soil. Soon, I was happily surprised to find the turmeric shooting up lush green leaves. The ginger followed with its own full leaves within a week or two.

I soon learned that both plants like to be kept moist, and I added a rainwater-catching system near the front porch to make watering easy. I have had no problems with insect damage and both plants quickly rose to at least 3 feet tall. I allowed both plants to grow as long as I could, covering both with a black plastic bag during the colder nights in November.

I began to harvest the turmeric when I could see the tuber peak through the soil on some of the plants. These tubers are easily snapped off, allowing the remaining plant to continue to grow.

Turmeric can be frozen whole, or grated into individual serving sizes. It can also be dried in a dehydrator or in an oven on parchment at low temperature.

Use stored turmeric later in smoothies, curries, or tea. Turmeric is a great anti-inflammatory. I use it daily and find that it makes a noticeable difference in the nerve pain I have in my feet.

My ginger was also growing well. Ginger leaves are not as round as turmeric leaves; they are thin and spiky. I finally harvested ginger late in November. I removed the upper stalks and leaves, and then dug up the root.  I harvested one third of the ginger and stored it in a covered box in the basement, where it seems to keep well in the dark, cool environment.

It was nice to harvest my own ginger, but we consume a lot of ginger in our smoothies, so it didn’t last very long. I replanted the remaining two-thirds of the ginger root in an indoor planter, because these plants don’t like temperatures lower than fifty degrees. I will move them back outdoors when temperatures warm up in the spring.

My first-year harvest was minimal, but the stock I have for next year is more than double what I started with initially.

Next year when I plant, I will allow more room for each plant, because they grew too close together last time and this may have stunted their productivity. I am also composting so that I can add fresh compost to their potting soil.

This first year has been a learning experience, and I know I will improve in the coming years. I am working on a vertical gardening idea to maximize my growing space, and I also have a big backyard to expand into eventually.

I created a challenge for myself and had fun proving that turmeric and ginger can be grown in the Midwest and other cool climates. I hope this information is helpful, and I encourage you to try it yourself. If nothing else, you will discover a beautiful new plant with lovely ornamental green leaves.

Note: This article was an entry in our October-December 2014 writing contest and was originally published on December 10, 2014.