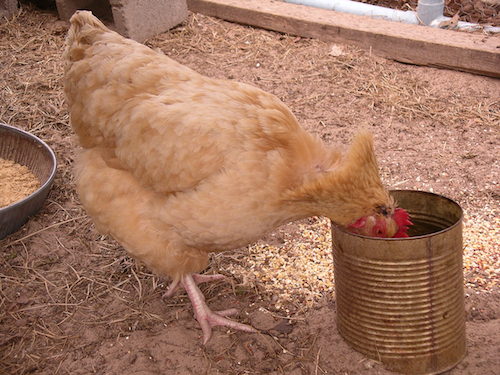 How To Create Chicken Fodder Using Your Old Seeds

Over four years of learning and teaching survival gardening and cooking I have harvested many crops, but just as important is harvesting seeds for the next year’s crops. I have hardly ever needed to buy seeds, and never more than once for the same crop. At first I harvested seeds from annual fruits like pumpkins, long neck squash, watermelons, and cucumbers. After that I researched how to harvest seeds from biennial crops with a two year life span like carrots, daikons, rutabagas, turnips, and parsnips.  Then I moved on to more annuals like fennel, corn, popcorn, sorghum, and radishes.

As you can imagine, I had many seeds that never made it into the garden. I watched my Chinese gardening buddy Xiao dump his old seeds into the trash or the compost pile. I found that practice to be wasteful, and I thought feeding the seeds to my new chickens might be a better solution. Of course the chickens could consume all of my extra seeds in about two minutes, so I thought that might actually be a little wasteful too. What to do?

Now I am entering this winter with a flock of 38 free range pastured chickens. I had been planning to pasture the chickens over the winter in my recycled 30′ x 96′ greenhouse, but I am finding that the grass will be gone in less than a month. If I expect premium prices for my pastured eggs, the hens will need more to graze on this winter than the existing grass in my greenhouse. What to do?

There is a distinction with little difference between sprouts and fodder; fodder is sprouts that have grown to be more than four inches tall. Before I studied this, I believed that growing fodder was just a way for farmers to make the grain (seeds) look more massive because of added water, without adding nutrients from the sun and soil. But this is not the case. During the first week of growth, seeds become plants with much greater concentrations of vitamins and protein. The few weeks of effort to grow fodder pay off not only in bulk, but in nutrients as well, even though the plants don’t really “grow” with photosynthesis.

I liked the idea of turning a small seed like rutabaga or kale into a truly edible delicacy for my chickens. I gathered many of the various seeds I have collected over the past four years. I included seeds that were too far out of date to be used in the garden. Not only did I use up the older seeds, but I also found out which of them were still viable enough to be planted in the garden in spring. Some of the oldest seeds didn’t germinate but the chickens ate the seeds anyway, even after the seeds had soaked for three days. No waste at all.

I used many other sources to supplement my stash of saved seeds. I started with a fifty pound bag of oats that I already had on hand. After seven days I was able to feed those sprouts to the chickens and start over with different seeds. I bought lentils and pearled barley from the bean isle at the grocery store. The pearled barley never germinated but the lentils grew nicely. I also began to experiment with various prolific weeds that might grow into sprouts that a chicken would like. I even tried bird seed.

I showed my buddy Xiao the sprouts and fodder that I was growing and he regretted having wasted his old seeds.  He returned the favor to me by teaching me a lesson about how not to waste anything when you harvest a chicken. We had been given some old hens that weren’t laying and a rooster of the same age. Xiao processed them and taught me many uses for the parts that I did not know. He showed me that old hens have a lot of fat stored in their bodies. The Chinese save that fat for cooking, and it can also be used to make soap using wood ash as the only other ingredient. Did you know that there is something called red tofu? White tofu is kind of like cheese made from soy milk. Red tofu is made from chicken blood with a little added salt water. The mixture coagulates to a firmness just like soy tofu and it is rich in protein. The Bible tells us not to eat the blood because the life is in the blood, but I ate the livers, gizzards, hearts, and the testicles. Any developing eggs inside the hens (mostly small to large yolks) are good to eat. After eating a chicken, I always throw the bones and carcass back into a pot and boil it to make a soup, and even after that there are still some guts and bones left over.

My experiments with old and discarded seeds brought me a few new learning experiences, and allowed my buddy Xiao and I to teach each other about preventing waste. Use your old and discarded seeds to grow sprouts and fodder as a nutrient rich winter food for chickens, rabbits, cows, pigs, goats, or any of your animals. Even if the seeds do not germinate you can feed them directly to the animals. Share these techniques with a neighbor and they just might share some good information with you in return.

This article is an entry in our January – March 2015 writing contest.  Be sure to rate this article – your vote is an important part of picking the winners!

The current prize pot for this contest is already over $1,300, with more to come!  Current prizes include:

Click here for the complete list of rules and prizes – and enter your own article for a chance to win.  We want to hear from you!