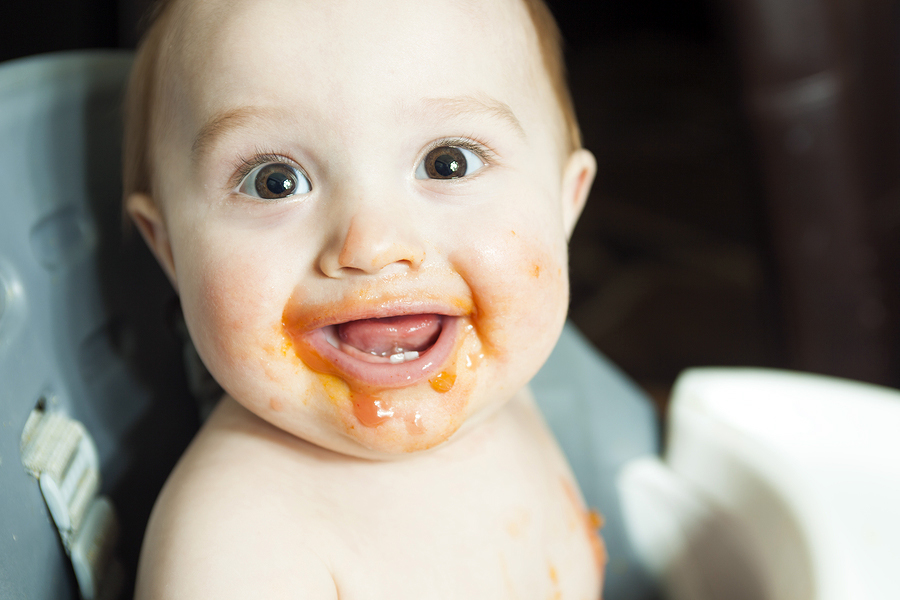 Homemade Baby Food from the Garden

In our household we like to eat, but we’re also really picky about what we eat and the quality of food we eat.  And while we know how to feed ourselves pretty well, we now have a new little person who is starting to take their first bites of solid food.  And we’ve been a little tentative about what to feed to baby.

At first it seemed like there was a huge disparity between what we could eat and what the baby could eat.  And it was stressful to think that we would have to prepare two meals at every meal time.  Because of our eating/food convictions, prepackaged, processed baby food is simply out of the question.  And while it feels crazy to make things harder on ourselves by having such high standards for the baby’s food, especially while we’re suffering from sleep deprivation – why would we serve our growing baby anything but the very best food we can get?

What we’ve discovered is that it doesn’t have to be that hard, and now we make all the baby’s food.  You can puree cooked or raw food quickly and easily for healthy food that the baby can eat.  For example, right now he is eating a puree of peaches, bananas, and cream.  The peaches were frozen from last season.  And he’s also been eating a puree of wild blueberries, avocado and pear.

He pretty much likes everything that he’s tried and, knock on wood, he hasn’t had any food allergies so far.  When we make something the baby doesn’t like, the dog has a great day (she gets the rejects/leftovers).  And I probably should mention here that we’re loosely following Sally Fallon’s Nourishing Traditions, which basically introduces cereals and grains last instead of first.

How to Make Baby Food Purees

Aside from the Nourishing Traditions book and common sense, there are two pieces of equipment that have made making the baby food so much easier.

The first is a pressure cooker.  This is the second pressure cooker I’ve owned.  The first was the kind with a weight that sat on the vent and rattled like crazy, always threatening to fly off while stream prattled out of it.  The newer one seems much safer; the the vent doesn’t come off and the lid locks on twice.  My grandmother put the fear of God in me about using a pressure cooker, so I haven’t used it as much as I should have.  But we got rid of our microwave a few years ago, and while the pressure cooker is not actually a substitute, it can rival the microwave for convenience with its quick cooking times.

The second piece of equipment is a really good blender.  I used to roll my eyes at people who spent hundreds of dollars on a blender.  I had a super cheap one, and it sat in the back of the cupboard, hardly ever used.  Then we were gifted a very nice blender, and even before we were making the baby’s food, we were using the blender everyday.  A good blender like a Vita-mix is really helpful if you’re going to make a lot of purees.

Take Control of Your Baby’s Diet

If the ingredients are raw, like they are in the purees mentioned above, the prep time is minutes.  Otherwise, from stove to table I can have food to the baby in about 30 minutes.  The other day I cooked two small sweet potatoes with two organic apples.  The cooking time was about 10 minutes in the pressure cooker.  I gave them 5 minutes to cool, and then put the potatoes and apples in to the Vita-mix with a little bit of distilled water.  In about 3 minutes, the puree was done and cool enough for the baby to eat.

What could be healthier?  We know every ingredient that went in to his food and we use as many ingredients as possible from own garden.  Now dinners are simple and easy, and everyone in the house right down to the dog ends the meal with a belly full of healthy, homemade food.

Now, if we can only find someone to help with the dishes…

Read more: Hand Washing vs the Dishwasher – Which is Better?

Thanks to Harriet from Ft. Worth for participating in the [Grow] Network Writing Contest.