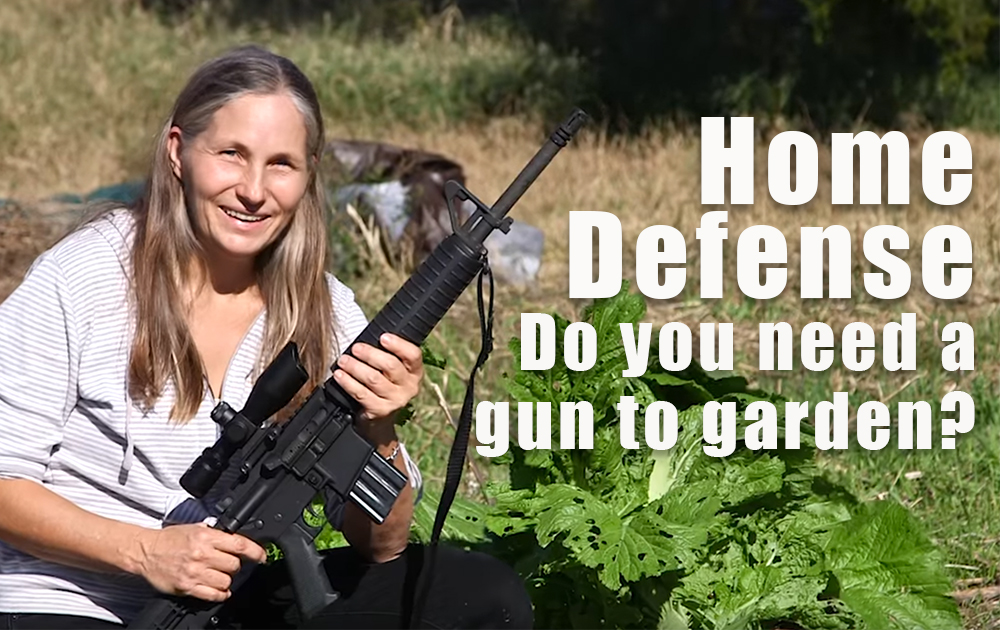 Home Defense – Do You Need a Gun to Garden?

Guns aren’t useful for digging or anything like that. However, if you are becoming self-reliant, you may want a gun for home defense.

Let me tell you a true story that happened to me and made me decide to go buy several guns. This from a woman who couldn’t even look at the glass case where the guns were kept in the sporting goods area. Avoiding my eyes on the way to the camping section was the norm.

In the early days of The Grow Network, back when we first produced the DVD “Grow Your Own Groceries,” I went to several local stores to see if they would sell it.

Watch the video to hear the rest of my story (Length: 4 min.15 sec)

How scary is the thought of being without a home defense strategy?

Think about what you would be protecting.

If you don’t own a gun, are you really prepared for any scenario?

When he looked at me for a long moment, as if I was stupid…

…and pulled out a big, black semi-automatic weapon, at first, I didn’t understand. Then, as he carefully laid it on the counter between us, I was stunned. He wasn’t threatening me. Looking back on it, he was opening my eyes.

His words, “Well, if anything happens—it is like this—with this gun, I can get all the food I need from people like you.”

I was speechless. Note: I didn’t sell any videos either.

Now I live in Texas, which has a proud tradition of gun ownership.

Buying, selling, and swapping guns is easy and legal. In fact, it is a major pastime for many Texans. While that doesn’t mean that everyone in Texas would be part of a marauding band of gun-totin’, food-stealin’ individuals, that mentality exists in some form everywhere. It’s the “haves” versus the “have nots,” and feeling like you’re owed something for which you didn’t put in the blood, sweat, and tears.

In recent history, it is well-documented that crime and violence go up as economic conditions go down. Certainly, there are scenarios where law and order could break down. In that case, having some level of home defense is not only an important skill, but smart!

After the experience with the shop keeper…

…I realized I needed to learn a whole new set of skills that included home defense. Getting over my fears and prejudices about guns and putting emphasis on understanding defense became a priority.

In an upcoming article, I’ll write about what guns I choose to use and why.  I’ll also do a short series on resources that I’ve found particularly useful for understanding principles of home defense.

As shocking as the experience with the shopkeeper was, I see it as a good thing. It opened my eyes to a reality I hadn’t been willing to see.  While this site is mostly dedicated to food and medicine, I will let you know what I’ve been learning about personal and home defense, too.

What a shocker! Huh?