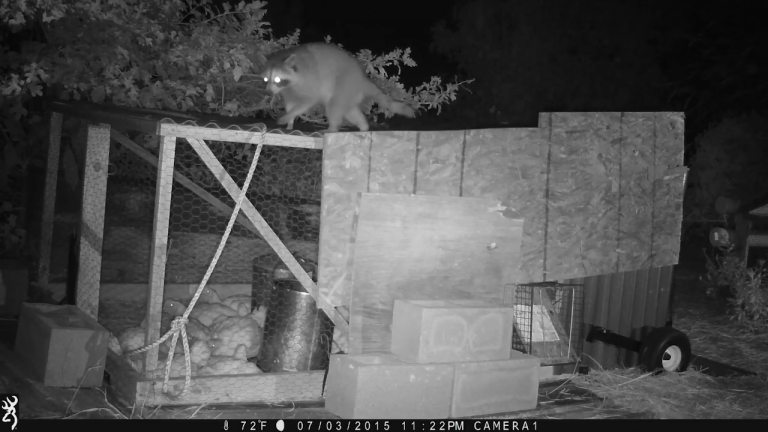 Hi, this is Marjory Wildcraft. In this edition of Homesteading Basics, we answer the question, “Are game cameras useful to homesteaders?”

The short answer is yes. Game cameras are a set of eyes and ears working for you in the middle of the night, and they can be really useful for identifying threats to your backyard chickens. They help you troubleshoot issues and show you exactly what’s been happening.

For example, here’s game-camera footage of my chicken coop when I was having some really bad problems with losses.

Isn’t that some amazing footage? Look at those raccoons and what they do!!!

Birds Do It… Bees Do It…

Now, my brother in North Florida sent over some footage that he had taken—we’ve included it in the video above. Actually, this answered a question I didn’t even know I had: “If tortoises move so slowly most of the time, at what speed do they have sex?”

(Don’t you just love that male tortoise moving his head quickly like that? It’s so funny.)

Help Protect Your Chickens And Livestock With Game Cameras

We recently did a trial on four different ones. . . . Stay tuned for the results!

(This is an updated version of an article that was originally published on January 26, 2017.)