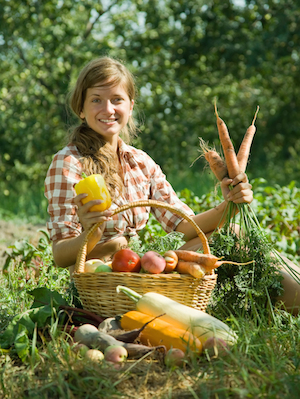 From Suburbia to Farm Chores

This is an entry in this month’s contest “What Got You Started In Growing Your Own Food?”.  Be sure to rate this article!

For one thing, I always wanted to be like my mom and stay home with my kids. She had her big ironing board. I had my little toy iron and board set up next to hers. So when my (now ex) husband was a reluctant provider, living in the suburbs of a small bedroom community south of Portland, Oregon, I joined Clackamas County Gleaners. Yes, it put lots of nourishing food on our table, but in those days gleaners was mostly gleaning farm fields and picking up garbage bags full of frozen bakery goods locally.

We had distributions too, with salvaged grocery goods for which stores got tax benefits for giving away. After a few years, I had done telephone-tree calling, hauling, being a distribution site on occasion, field boss at picks, farmer contact and eventually assistant team leader. Worked on USDA food distributions too. So when we had the opportunity to buy a 7 acre piece of property at what amounted to a steal in 1989, I was ready to go. I figured I’d be able to quit all the running around with Gleaners and stay home to home school my kids and grow more of our food.
We definitely made mistakes, as we were about as green as green horns can be. Right off I bought a prize milk cow, a Jersey, from a “friend”. Bonnie was registered and bred for improved size and milk production. Paid about 3 times more than I should have. Bought a bucket milking machine and got it set up. I was going to milk my heifer as soon as she calved! Fortunately, she calved on her own. I soon found I could not lift the steel milk container with 4 gallons of milk in it, to carry it to my basement milk kitchen and filter, bottle it in gallon jars and refrigerate.

Hubby had to do it… twice a day. I did the clean-up and sterilizing of equipment and jars. 8 gallons of milk/day proved to be way more than we could reasonably use. I sold raw milk and bought dropling bull calves off local dairies and learned to castrate and disbud horns as well as feed big bottles to all these big babies.

We also bought some female baby goats who we eventually bred and milked too, and some culls from a local sheep farm for breeding, wool and meat. We got a pick-up truck with a canopy and took weaned babies to the livestock auction when they were ready. Milk money and auction money supplemented our little family farm.
The kids got involved, but not as much as I thought they would. At first they wouldn’t even drink the cow milk. “I know which end of the cow that came out of!” I had to put our milk in a store container and fool them to eventually get them to drink milk from the jar. They learned to like the homemade butter I made in the blender too. There was a LOT of it! And ice cream!
We made our fair share of mistakes, but people we’d bought animals from were very nice and eager to teach us anything we wanted to know about. We learned by observing their barn set-ups too and practices. Sometimes, however, our vet who worked out of his home and thus made house calls, just shook his head. I learned some vet nursing skills too, like treating wounds, giving shots, worming, something called “drenching”. It’s what you do if a ruminating animal eats way too much apples or grain or such. We learned some things the hard way. That’s another story…I can remember saying, “You know, I always wanted to do this, and now I can say we did.”
We needed a garden. So I scratched some soil and put in some seeds. The grass and weeds came back with a vengeance! It was a war on weeds, and I fought the hard way, until I decided I had a lot to learn and bought some books. Actually, I got a book for almost everything. From gardening to “Raising Sheep the Modern Way” too spinning and tanning hide as a cottage industry. I learned a lot. And I kept learning. I’m still learning. 25 years and I’m still learning.
I had a barn, and learned to buck the delivered hay in the summertime. It had to be stacked in the barn before it rained, and in Oregon it RAINS! Hay was too heavy for the kids, and hubby had to work outside the home, so you know who did most of the work. We did also manage to home school, doing actual academics too. No chickens though. No coop, and I’m no builder, so for that time, we didn’t do chickens.
Probably my biggest challenge was that early one summer a very spooked little herd of sheep came running into the yard, and one one animal didn’t look right. I got them some grain in their feeder so I could get around behind them and take a look. It turns out we’d had a cougar attack. There were claw marks in both sides of the animal, a yearling ewe, and two big roasts eaten clear out of the rump. What was surprising was that she wasn’t hemorrhaging and could still walk. She could run in fact. I rounded her up and blockaded her in a calf hutch, then went in and called the vet.

This time I had to make the trip in town. I only had our Geo Metro for transportation, but put down old towels on the seat and floor, and lifted her in. It felt really strange driving a wounded sheep to the vet in the front seat of my car. Her rump was on the floor part, and front legs lying on the seat. I had put a rope around her neck and wrestled her into the office. The female vet convinced me to leave her. An hour later she called and said, “It’s a lot worse than I thought.” But I said save her anyway. So she pulled the big wounds together as best she could. We went back once for debridement, and then it was up to me. Oral and injected antibiotics given, cleaning wounds daily with peroxide and iodine combined, dealing with some infection, and then maggots. After three months, with diligent daily care and bandage changing, her last wound was but a scab the size of a dime. She went back into the herd and bred that fall. I was proud of myself, but my husband was not…$400.00 on a sheep…But I will tell you to this day, if I had to, I know I could deal with any very bad wound if I had to.
One thing I learned was that we transferred our dependence from the grocery store to the feed store. I was still spending money on food, just not as much for us directly. 7 acres just isn’t big enough to grow our own feed, and at least half the acreage is wooded and has lots of brush. I also think I had too many animals for what pasture we had, and had the animals even graze our lawn. That meant no ornamentals by the way. They’d eat that too, and some of that stuff is poisonous to livestock. Still, I thought it was cool to have “four-legged lawn mowers”! My how-to books cost money too, and I didn’t like having to take reference books back to the library. I still go to my bookcase and review some.
Right now, my kids are grown and my endeavors are smaller. I have three neutered male goats for brush; a ewe, ram and now a lamb for meat; we’ve had chickens on and off, and I have a small rabbitry for meat. I could use rabbit furs more than chicken feathers, and I’d rather skin than pluck. My garden is smaller, and I’ve learned about things like mulch. And believe it or not, I went back to Gleaners. I’m now co-leader of our 20-something member team, and I have learned the incredible value of team work. And I have extras to share with some lonely, fixed income, house-bound, elderly friends too. I’m looking forward to growing older at our home of now 25 years in the country.

The prize for the winner of this months contest is valued at $100 and includes a copy of the “Grow Your Own Groceries” video set, “Alternatives To Dentists” video set, and 3 months of free membership in the Core Community.  If you want to enter this month’s contest, write an essay on “How You Got Started Growing Food” and submit it here at this link: http://growyourowngroceries.org/contribute-here/