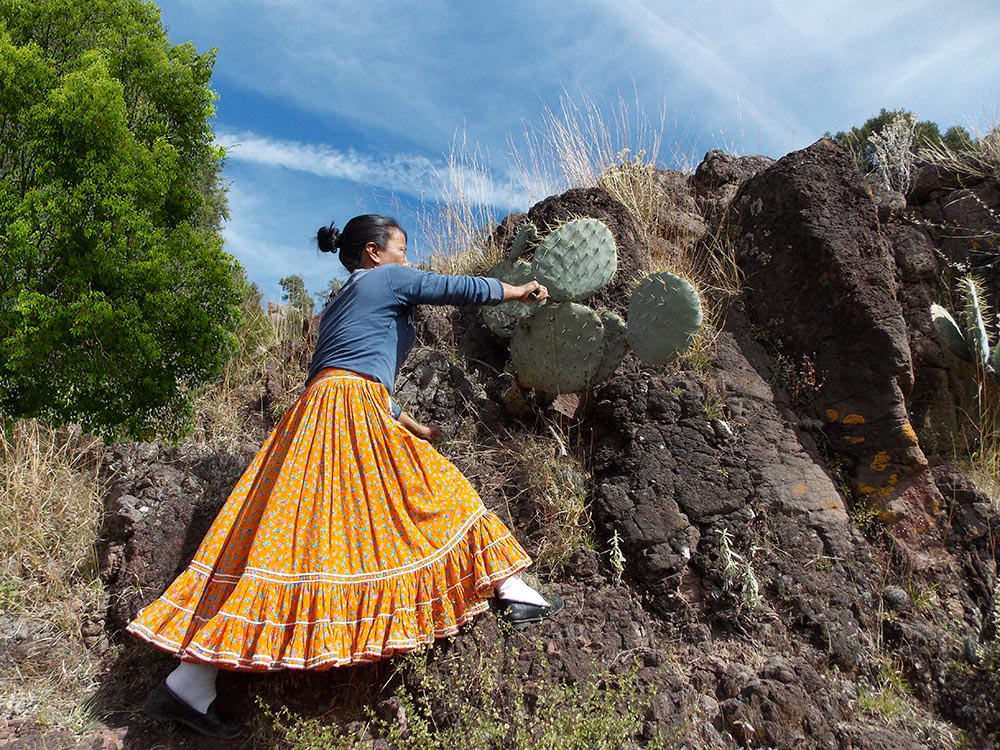 Extreme Agri-Tourism: Off the Grid with the Tarahumara Indians, Chapter 8

“Outdoor women who do a lot of exercise and really use their muscles have such a nice shape. And you really have good legs,” Dave continued.

I was completely freaking out at this point.

My mind raced, “is Dave hitting on me?” Anthony was within earshot; although he was far enough away I couldn’t see the expression on his face. My vision was getting blurry. But I did see that Anthony was completely still and no longer working his camera or lenses, so I was pretty sure he was listening. Surely Dave could not be so bold, or stupid, with Anthony so close.

In spare moments Anthony was frequently backing up data. The batteries for this trip were a big chunk of the weight we carried.

All of us were happily married – to other people.

It couldn’t be that. But what?

“With the warm weather we are having, what you are wearing is probably just fine where you live…” Dave continued.

I almost started breathing again with relief. Thankfully – I think I could now see where we were going with this conversation. My clothing was inappropriate for the situation. I didn’t need to look down at my cutoffs, which were not that short, but they definitely weren’t like the Tarahumara women with their long skirts. (Check out the photo where we are shelling corn in the previous post, Chapter 7 of this series; do the shorts look inappropriate to you? – ouch!)

How could I have been so thoughtless?

I flashed back to the television show in the hotel in Los Mochis with the women in short shorts (back in Chapter 1 of this series I saw something in Los Mochis that would cause me great embarrassment). And the big Corona beer poster in my home town with the sexy models with their short shorts… But those were Mexican women who lived in big cities.

I wasn’t like either of those women. But what did I look like compared to full-blooded Tarahumara Indians who lived rurally and didn’t even own television sets?

Of course Dave was right. He was probably embarrassed too. He probably didn’t want to have this conversation any more than I did.

“These Tarahumara live near the road and they have seen everything. So you are probably not offending them.” I picked up where Dave had been continuing to talk.

Well, that helped a little.

But Dave went on, “But you really do look good, and even if you don’t notice it, the men are looking at your legs. And the women see their men sneaking looks at you and it is going to cause problems in marriages…”

I screamed inside my head “Dear God, please make this man stop!”

“I’ll change clothes as soon as I get back,” I said abruptly, and probably a little too loud.

Even as I am writing this weeks later, I am freaking out emotionally. So I am going to go have a glass of my home-made elderberry wine and I’ll be back in a minute. BTW drinking a glass of red wine every day is one of the habits of the healthiest people in the world. Although I didn’t see the Tarahumara with wine, they do make a home made beer.

[Check Out this Article: The Healthiest People in the World and How They Got That Way]

Fortunately at this point in the story, Lola was done filling up the jug and Pedro was shouldering the bottle to take back to the house. They seemed oblivious to our conversation.

As we walked back, Dave was saying soothing things trying and make the situation less awkward. But I couldn’t hear him. I was fighting back tears. When we got back to the house I immediately went to my room, got into long pants, and then climbed into my sleeping bag and scrunched down to the bottom so my head was covered. Then I had a good session of deep breathing and calming myself down.

I eventually climbed out of my bag because the nixtamalization process was almost done and it was time for the next step. Focusing on work is always a good remedy in these situations. And I was going to have to get on with life. Nobody said anything to me and soon enough everything was back to normal. I was very careful from that point on to be aware of which culture I was in, and that I stayed within appropriate boundaries.

Back to work – Marjory spent quite a bit of time on a grinder milling corn.

I am very intrigued by this nixtamalization process. And I’ve got to tell you a fascinating background story. In the 1800s many white settlers and homesteaders moved into the southeastern part of United States. They grew and used corn as their primary staple crop as had the indigenous people of that same area. But the white settlers became afflicted with the disease known as pellagra.

Pellagra has the symptoms known as “the four Ds”: dermatitis, diarrhea, dementia, and death. While settlers had copied the indigenous peoples and grown corn as a staple crop, they did not copy the process by which the corn was prepared. The indigenous people did not suffer from the disease, yet the settlers did. Pellagra reached epidemic proportions in the southern United States in the early 1900s. Between 1906 and 1940 more than 3 million Americans were affected by pellagra, resulting in more than 100,000 deaths.

Although most of the cooking is done by women, all the men know how and here is young Diego learning from his grandmother.

It turns out that the special indigenous “nixtamalization” process releases vitamins from the corn. Especially niacin (vitamin B3) and tryptophan, which were later identified to be the nutrient deficiencies that caused pellagra.

A pot of corn with lime simmers on the wood burning stove.

How did these so-called “primitive” people know to nixtamalize their corn? Where did they learn the process? Who told them how to do it? No one knows. It is quite a mystery.

The key part of the nixtamalization process is boiling the corn in a lye solution. The lye can be made from the ashes of hardwood trees, as is often done in the southeastern part of United States. Or, as in Mexico and the southwestern US, (where hardwood trees are not as easy to come by) a lye solution is made using lime.

I asked Lola where she got her lime, and she showed me a big bag of it she bought in town. Not that long ago, they used to dig special rocks and then bake them in the ground to make their lime. I really wanted to film that process too, but it took a while and we didn’t think we would be able to fit it into this trip. If I ever go back that’s one thing I definitely want to record.

I believe that the nixtamalization process with lime is very important for another reason. Lime is basically calcium and because of this process the Tarahumara have a very calcium-rich diet. The Tarahumara also love to eat nopalitos, which are the pads of prickly pear. The Tarahumara were very aware that eating nopalitos was beneficial in preventing and curing diabetes. But I am not sure they knew that nopalitos also are high in oxalates. Oxalates bind up calcium in the body. I am willing to bet that eating the calcium-rich tortillas from nixtamalized corn helped offset any damage the oxalates in the nopalitos might have done. It is quite amazing how these indigenous diets that have been developed and tested over hundreds of years really have a lot of wisdom behind them.

We got some fantastic footage of Lola harvesting and cooking prickly pear pads, a.k.a. nopalitos. Note: if you want to see a detailed video of the process of making tortillas, tamales, pinole, and nopalitos, check out the presentation at the 2016 Home Grown Food Summit. In that free presentation you can see for yourself how the nixtamalization is done – it isn’t oblivious how they could have discovered this, is it?

And while Dave had given me quite a shock that morning when he revealed how upsetting my bare legs were to Tarahumara men, within the next two days, I would inadvertently have as big a shock for him.

This article is Chapter 8 in the series “Extreme Agri-Tourism: Off the Grid with the Tarhumara Indians.” You can read the rest of the series here: