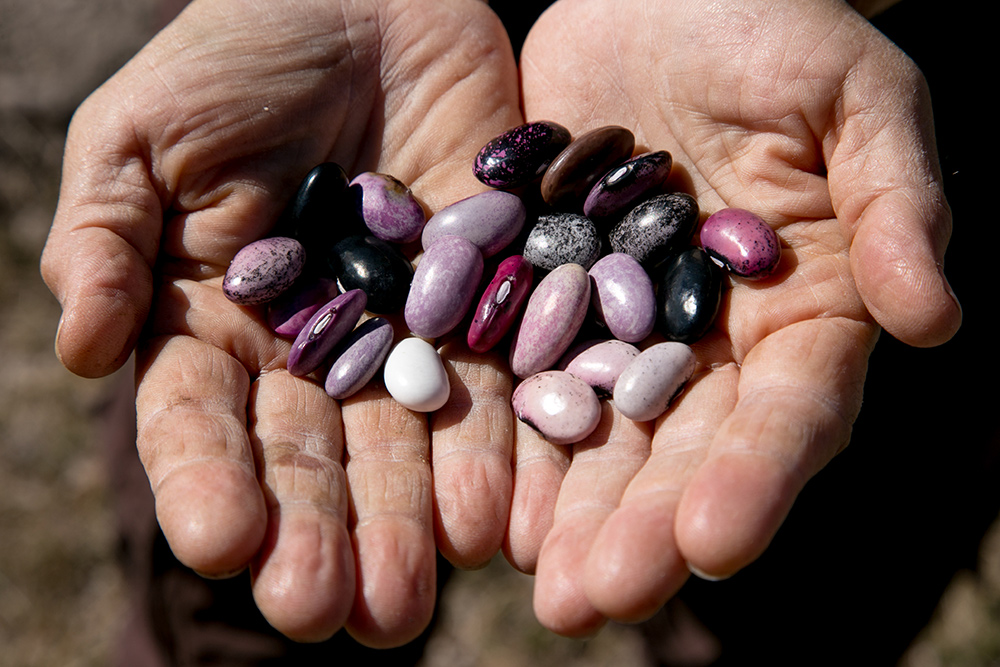 Off the Grid with the Tarahumara Indians, Chapter 12

Dave was the first to move and he strode out to greet the Tarahumara in the field. I admit I held back out of embarrassment. But in the next moments we watched Dave excitedly shaking hands and hugging the Tarahumara and calling us to come over.

“What good luck!” Dave yelled back to us, “come on over.” It turns out that the people here working the field were the ones whose home we were headed towards. Juancensio, his wife Margarita, and the rest of his family.

Juancensio and Margarita in front of their home

“But this is not your field,” Dave exclaimed. Juancensio explained that so many of the Tarahumara had abandoned their lands to move into town, he had started taking over the fields and planting them. He did not mind us eating the apples one bit, especially since he too was a sort of trespasser. They waved us over to a rest area they had setup, and Margarita offered us cups of pinole.

We chatted for a bit, but the sun was high and we had caught them near the end of the bean harvest, and they needed to get back to work. “Can we help?” asked Dave. Juancensio said “no,” the weeds had prickles and we would get scratched.

Dave, Anthony, and I looked at each other and fully understood that was an attempt at politeness. So we went out into the field and began to mimic what they were doing.

It looked like the main harvest had already been done and they were gleaning the last remaining beans that could be gotten. So we went around and searched for whatever pods of beans we could find. It was true that the weeds were a little prickly, but a few scratches are par for the course in most agricultural work.

We collected the bean pods in buckets or on cloths, and took them to an area with an almost flat stone. To shell the beans, we took turns beating the pile with long sticks. The heavy beans would fall to the bottom and the lighter chaff, leaves, and stems would be taken off the top, shaken, and put to the side. The beans at the bottom were collected and then poured from one bucket to another for further winnowing.

Lucia and her brother beat the beans

The beans were large multi-colored beauties. Later, I asked Juancensio where he had gotten the bean seeds, and he said they had been with the Tarahumara forever.

A Tricky Walk Back to Juancensio’s Homestead

The earth had kept turning while we worked and now the sun was low in the sky. Dave said we still had about an hour or so of hiking to do. We watched Juancensio load up his donkey with two heavy bags of beans that had been harvested. We picked up our packs, and everyone headed across the field towards a trail that would take us to their homestead.

The trail was crazy steep and at times imperceptible. When I wasn’t worried where my next step would be, I was swept away by the beauty of the land. We hiked for about an hour or so and then came to the edge of Juancensio’s homestead. He and his family live in a breathtakingly beautiful valley.

Their home was so picturesque, tucked so far away from any roads.

Anthony noticed that their home was made concrete. Later he asked “Juancensio, how did you ever get concrete up here?” The family laughed and pointed to the burro. Countless bags had been painstakingly brought up from town by burro and mixed by hand. It was a lot of work. The home was approximately 20′ x 20′ with two doors and no windows.

Those little burros did so much work. Earlier I had been teasing Pedro that he was our “burro rojo” since he always took the heaviest pack and he only wore the one red shirt he had brought on the trip. Pedro considered this nickname a great compliment and it was starting to dawn on me why. Burros are awesome.

These Kids Can Work

Upon arriving at his homestead, Juancensio dropped the lead rope for the burro and his 10 year old daughter Lucia began to unpack the bags of beans. Dave told me that by the age of about 12, young girls had all the skills to run a homestead and were often thinking of getting married.

Anthony whipped out his camera and caught Lucia working on video. I am a little embarrassed that I was standing around while she worked, but arriving in this new setting and unsure of the order of things, I just didn’t know what to do. Fortunately, Dave came to his senses and helped her out at the end. Those bags were heavy!

Check out this short video clip of Lucia that I uploaded to YouTube. Can you get your kids to work like that?

Juancensio’s homestead was at about 7,000 feet and the air was starting to chill in a way I suspected was going to turn into downright cold. I looked up and the crystal clear sky overhead confirmed it would get much colder.

When packing for the trip I knew it would be cool at night, but somehow in my subconscious I was thinking, “Hey I am going to Mexico,” and images of people on beaches in Cancun flickered in the back recesses of my mind. Somehow it didn’t occur to me that I would be up high in the mountains and November was a cold month. So the bottom line is I knew that I didn’t have good enough gear to keep me warm sleeping out under the stars at this altitude.

I thought of how wonderful the heat was from the old 55 gallon drum they had cut into a crude stove inside their home. And I suspected (correctly) that we would not be invited in the house to sleep.

Dave and Anthony had apparently prepared better than I had, and they began to lay out their gear on the ground near the house.

So I looked around. From past experiences sleeping outside, I knew there were two things I would need. The most important thing I already had: excellent ground isolation with a blow up pad that my sweet husband had gotten for me. Number two would be to find some overhead cover. I knew that even just sleeping under a tree would be warmer than out in the open. But the only tree nearby was on a steep slope and was filled with a flock of free range chickens. Sleeping underneath a big flock of birds is never a good idea. Waking up covered in splotches… nope, not good.

Would You Rather Freeze or Sleep with Rats?

There was a storage cabin right near the house and I asked if I could sleep in there. “No” was the initial response. And then they explained that it had a store of corn and there were many rats living inside. Juancensio hated cats and his attempt to control vermin with snap traps wasn’t working.

So we found places on the ground between the corn crib and other piled up goods.

And yes, that cabin was definitely filled with rats. I know there are a lot of people who have some deep-seated phobias about vermin; will they run up your leg? Or bite you and infect you with some disease? And it is true that in some cases their feces contains the dreaded hantavirus.

But while I am not exactly super fond of rats and mice, I do try to stay in good relationship with their nation. And I correctly figured that there was more than enough corn to eat, so they would not bother me. Although during the three nights we spent there, Pedro said he got nibbled once.

Now it so happened that while moving things out of the way, we put a guitar on top of the corn crib. And during the night, while the rats were doing their thing, occasionally one would run across the strings of the guitar and make it “bbrrriiinnngg.”

The next morning at breakfast Margarita was curious as to how I had fared in the cabin. I think they were really wondering if I was OK sleeping in there or not. You know, how would this rich American woman deal with rats running around her at night? And would they be perceived as bad hosts? I smiled and reassured her that I was fine. I told her, “Oh yes, you definitely have rats, and they are having a very good time. They played the guitar and had a fiesta with your corn.” Everyone laughed at that.

Seeing an Old Friend for the First Time

The day was going to be beautiful. Margarita and Lucia were going to show me how they make tamales. I would spend a lot of time with Juancensio discussing planting, harvesting, and livestock. And as it turns out, I was inadvertently going to rock Dave’s world.

Dave and I had known each other for about eight years or so… Twice a year this crazy group of about 300 people show up in a wilderness area to spend a week together trading skills and knowledge from the Paleolithic era. We do things like make pottery by digging up clay from the earth and then firing it in a pit. Or tanning deerskins using just the brains of the animal. Chipping stones to make blades. Or my personal favorite, making fire by rubbing sticks together. When you can get fire like that, something really changes in you. It’s hard to describe.

It makes total sense that Dave would always attend these gatherings; he is one of the world’s foremost experts in Stone Age living skills. But me? I don’t have any particular reason, except that my daughter and I love it. It is a special time for us to be together, and we have a ton of fun playing cave women for the week.

So Dave and I have spent many days and nights around the campfire, out in the bush, or learning new skills in small groups; and you would think that we know each other well. But apparently there was something fundamental about me that he never knew. And he was about to find out.

This article is Chapter 12 in the series “Extreme Agri-Tourism: Off the Grid with the Tarhumara Indians.” You can read the rest of the series here: