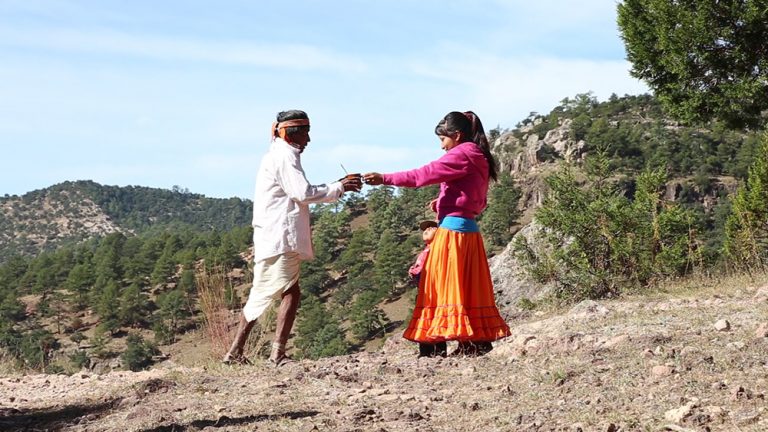 Extreme Agri-Tourism: Off the Grid with the Tarahumara Indians, Chapter 10

The Biggest Surprise Of The Trip? The Tarahumara Hate To Run

I was still having trouble sleeping and didn’t get much rest during the night. But during the days I was energized without any of the afternoon “lag.” Was it the never-ending mugs of pinole that I was drinking? It didn’t make sense to me that just a drink made from corn could be so filling and so energizing, but the Tarahumara swear by it and I had to admit I felt unusually good with very little sleep.

After breakfast (beans and tortillas as usual) the first of the more wild runners arrived. Everyone did a round of those gentle handshakes to welcome him. Any concerns I had about authenticity evaporated; just one look at him and I realized he was the real deal.

Juan Lerio looked half wild. He shyly engaged with us and yet also seemed to be keenly aware of what was going on in the mountains of our periphery. He was 71 years old. Like the other Tarahumara he had a small compact body, clearly hardened by a life spent mostly outdoors.

He was wearing a flowing white shirt and white cloth wrapped around his groin in the fashion of shorts. The Mexicans have been known to tease these guys, saying that they wear diapers. But it looked very loose, practical, and comfortable to me. I’m not sure how they tied or pinned it together, and it seemed inappropriate to ask.

And like Pedro, Bernadino, and most of the other Tarahumara we have met, Juan wore the sandals for which they’re famous. Look at his feet in this photograph – wow.

The sandals and feet of a Tarahumara runner

Others from the surrounding area started arriving. Afren began to play producer and he moved us all to a nearby area for the filming. As Anthony worked with Afren on the logistics, I sat on the hillside talking with the growing crowd of Tarahumara runners and observers.

A Stranger in a Strange Land

Initially, I found myself feeling really out of place with these people. Standing next to them, or sitting together chatting, I felt huge and bloated. We really are bigger, slower, weaker, and almost gluttonous compared to them. Normally I have an inner sense of femininity – but that completely disappeared now that I was so much ‘bigger.’

Sitting on the hillside talking with Tarahumara while Anthony sets up

But everyone was congenial enough, so I got over myself. Although shy, the wilder Tarahumara didn’t mind my questions.

I was fascinated by Juan (the 71 year old). I asked him when was the last time he had raced? “Last week,” he told me. He had finished a 72km race. They like to start at night when it is cooler, and it took him until noon the next day to complete.

The Biggest Surprise of the Trip

“That is quite a run,” I said, awed by his abilities. But almost immediately I was corrected, “No, I didn’t run. I actually don’t like running.”

Huh? I did a double take. Did he just say – the Tarahumara don’t like to run?

And if Juan wasn’t running last weekend, just what was he doing for those 72 km?

Rarajípari – The Tarahumara Game of Choice

The group laughed and then patiently explained the mystery to me. It turns out they find simple straight running to be very boring. Instead, they love a game they call rarajípari where they kick and chase a ball across the mountainsides. They maneuver this ball as quickly as they can along the narrow winding paths of their steep country side. It is much more interesting, and challenging. And indeed it requires constant shifts and adjustments and much more agility and overall athleticism than the more simplistic repetitive movements of running down a path. They said the only reason they went to those races in the US – like the famous Leadville 100 – was for the money.

So we came all this way to find out the Tarahumara hate to run!

And it is because just running 50 or 100 miles at a stretch is not challenging enough.

It took me a moment to let that sink in.

“What happens if the ball goes over the side of the path, deep into the canyon?” I asked.

Well, apparently, you have to go get it. And you can’t touch it with your hands. You have to somehow bring it up with your feet only. I thought that must be a very bad thing. But no, the Tarahumara assured me, the same thing could happen to any of your opponents at any time. So you never knew what would happen until the game was over.

I was so amazed that Juan could run so far and be in such great shape for his age. Later I would meet an 80 year old man of equal abilities. And I was stunned at one runner named Daniel Perez who looked so youthful at the age of 60.

I was thinking that when I got back home I would start running and increasing my athleticism. I had improved so much in the last several years already, but my gains seemed tiny now that I could see what was possible. I would definitely be expanding my garden to grow more corn, beans, and squash. That pinole drink was amazing and I absolutely wanted to start making that. What these people had was immeasurably good.

Wow, just running 100 miles was so boring they had to increase the athleticism of the game by a magnitude to keep themselves interested.

Have you gone back to your high school reunions every so often? I’ve found it quite fascinating. In your twenties and thirties everyone was eyeing the attractiveness of your spouse, how much money you were making, or what splashes you had made in the media. As the years and decades roll by, the focus shifts to who is most independent of the medical system and who is the healthiest.

Health. You can’t buy it. And living without it sucks.

The Inspiring Health of the Tarahumara People

I was inspired at seeing what is possible for a human body. These people who had almost no money, had a recipe for health and vitality, and everything that is really meaningful in life. And it was a pretty simple recipe that could be done anywhere; grow your own food, with as much family involvement as possible, and play hard.

“I hope that I will be in the great shape you’re in when I am 71 years old,” I told Juan earnestly.

Everyone laughed at me. “You won’t be,” they chorused in merry agreement.

OK, so they were probably right about that. But I promised myself I would be in a lot better shape than I was right then. The fact that I could do this trip now was a testament to how much more vitality and strength I had gained in the last few years.

Both Anthony and I were delighted at the Tarahumara’s insistence that we film things as authentically as possible. They had initially asked us if we could do the filming at night because that is when most of the races are run. Anthony explained that we didn’t have the video equipment for that. Since they do also run during the daytime, they agreed to filming during the day.

They felt it was very important for us to film a pinole stop. If you recall, pinole is that corn drink that I was pretty sure was keeping me so jazzed all the time. During a game, each runner has a support team. Since a lot of the games are played at night, about every 10 km a spouse, child, or friend would build a big fire and be ready to give the runner a cup of pinole. Unlike the ‘aid stations’ for American races, a runner only gets pinole from his own support team. Support teams generally do not offer aid to competitors.

The games were played by everyone; men, women, and children. The women used a stick to move their balls along, and the men just used their feet.

While I had been chatting with the runners, Dave had been pecking away at some task. If you recall, Dave is an expert in Stone Age living skills. And now he stood up and handed me a stone that he had shaped into a perfect ball about 4 inches in diameter. I passed the ball around and the Tarahumara looked appreciatively at Dave’s skill. They played with balls made of stone like this, or out of wood. Dave had probably learned from them in earlier years how to make the balls, and he had learned well.

I wondered how it works out trying to kick a stone ball while wearing sandals. But as I would soon see, it works out just fine. In fact, later on in the trip I would have the luxury of being on a mountain trail with no pack and lots of distance to go. I started kicking rocks down the trail playing a very rough version of their game. I did modify it a bit though; when my rocks went over the edge, I simply waved goodbye and found another rock. No way in hell was I scrambling down the canyon after a rock.

Kicking the stone ball with sandals – somehow it works out

I suppose it is the Stone Age version of ‘kick the can.’ It was really fun. I suppose classics are classics, huh? I was wearing my sandals and I found that I could simply use the edge of my sandals, and it was easy. I rarely hurt my toes.

Anthony almost had his gear setup, and soon we would be capturing the graceful movements of these people as they played their game across the rough landscape.

But first, there was one more fascinating conversation I would have with my new Tarahumara friends.

Do the Tarahumara Eat Meat?

So far, we had mostly been served a vegetarian diet (beans and tortillas, or tortillas and beans). Were the Tarahumara vegetarians? Did they like meat? Was cutting out meat a requirement for this healthy lifestyle?

Becoming vegetarian is a big trend in the US. Plenty of the rich and famous are cutting out animal products. Former President Bill Clinton, for example. He used to proudly say he never met a hamburger he didn’t like, but now he is on the vegetable road. Other celebs who reportedly chose the diet include Ozzy Osbourne, Ellen DeGeneres, Alicia Silverstone and Dennis Kucinich.

There is also quite an impressive list of great athletes, such as the ultra runners Scott Jurek and Rich Roll that are vegans and swear by their diet.

Do you need to be a vegetarian to be so healthy?

This article is Chapter 10 in the series “Extreme Agri-Tourism: Off the Grid with the Tarhumara Indians.” You can read the rest of the series here: