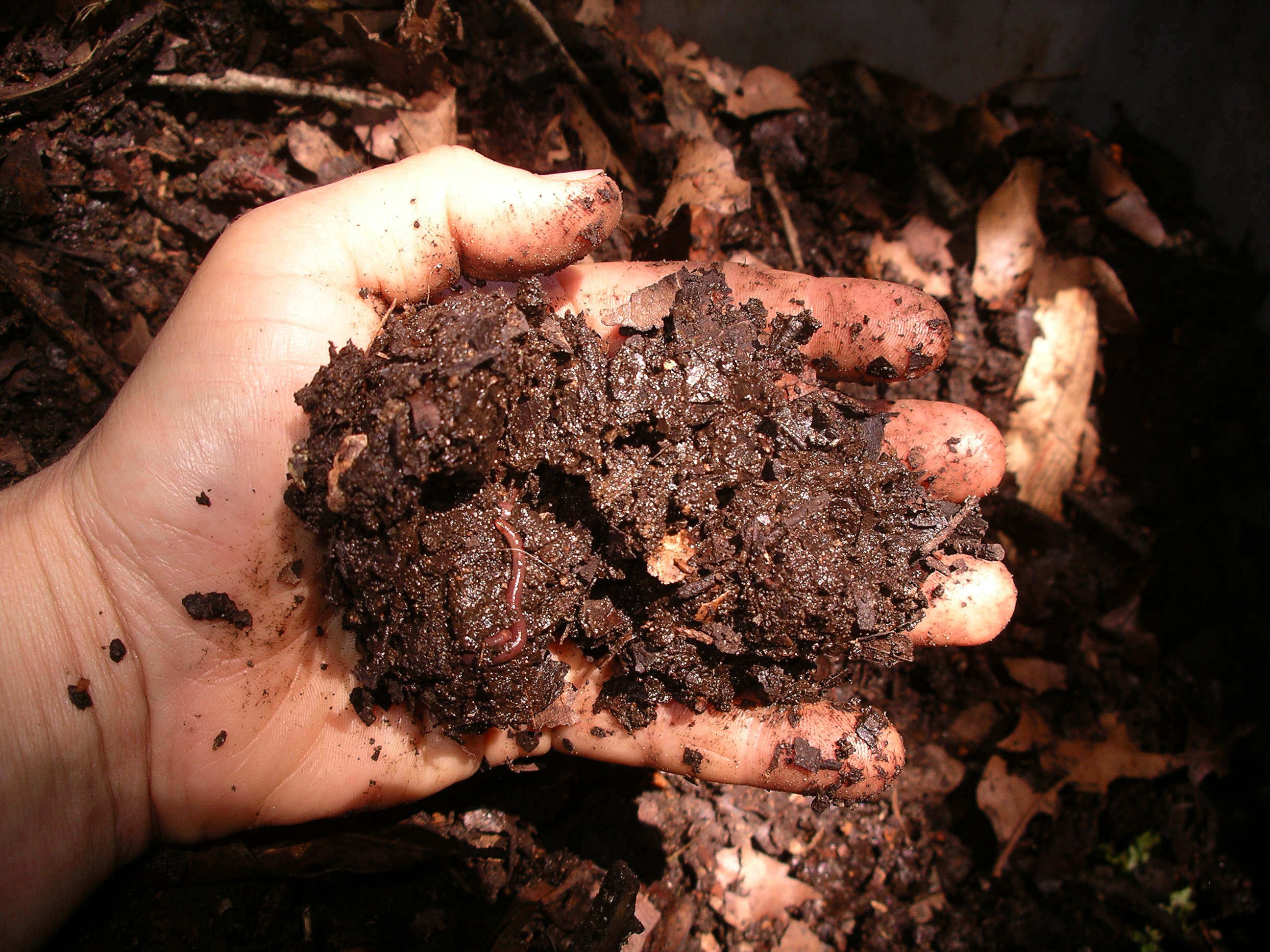 This is very simple. It is called composting by using the home waste. Why waste? Most people do not realize that waste is the treasure if you know what to do with it. But let us start from the beginning.

We have a small garden in our backyard. The size of 20′ by 30′ perhaps. We live in a rather cold climate of Alberta, Canada. The summers are nice but quite short. It is enough to say that the growing season is around 5 months long or less. Nevertheless, we successfully grow organic tomatoes, carrots, beans, radish, turnips, kohlrabi and many other veggies using only natural ways, all under the open sky. No pesticides, no herbicides and artificial fertilizers.

We keep our soil in a good condition by testing its pH and mineral contents occasionally. From time to time, we add organic peat moss (to control the pH) and organic compost from the store (to supplement the compost we create). However, the bulk of our compost comes from home made compost.

We use all the organic scraps coming from our kitchen, food leftovers and even used facial tissue and used kitchen towels. We do not use any other paper because it is contaminated with ink. To collect the kitchen scraps we use one gallon plastic bucket after ice cream with lid. The point is to use a rather small collecting container and therefore not allow the scraps sit too long before the bucket is full and taken outside.

If you take too big a container, before long the organic leftovers start to smell. The small bucket perfectly fits under the kitchen sink and putting in the scraps is not anymore difficult than disposing regular waste into the general garbage bucket.

The used kitchen towels also go to the compost, as mentioned before. One could object to that saying that to clean counter tops one uses harsh cleaning agents that are toxic. That is true in the case of general cleaning agents coming from the regular store. They ARE TOXIC. And we do not use them. Instead we use cleaners made by METHOD, a Californian company specializing in natural and biodegradable cleaning agents. We recommend them for all the cleaning jobs including washing clothes and dish washing. They are natural and non-toxic and therefore, whatever they come in contact with is not toxic as well, of course it includes the kitchen towels used for wiping off the surface. To digress a little bit on this subject you can go even further and use a number of natural cleaning agents around the household as in old times before the advent of modern toxic and harsh chemicals. They are: vinegar (5% strong), hydrogen peroxide (3% strong), borax and washing soda. They can clean just about anything around the household. You save money and reduce exposure to toxic agents. The advantage of using Method’s products is that you introduce nice and natural smell and that is usually associated with cleanliness. The smell in mainstream chemical cleaners may be attractive but is often toxic. Especially chemicals in spray are dangerous (everyone’s favorite for the ease of use) because of minute droplets hanging in the air for quite a long time after the cleaning and being breathed in by all people in the house.

In the community we live (Edmonton, Alberta) there is also a blue bag recycling program along the regular garbage disposal. Between recycling and composting we noticed that the garbage disposal (the staff that actually goes to the landfill) is somewhat less than one third of all waste coming from our household.

A lot of organic mass for composting comes from the care we give to our lawns. Every spring the lawn, after heavy layer of snow melts, requires regular care in the form of raking and removing of fruits dropped from the trees. In our case the tree is of kind of Japanese Cherry which in abundance contributes to the bulk of our compost. Dry leaves and raked grass straw also find their way into the compost barrels. Another source of the composting mass is the leaves and stems coming from the garden itself. It is the best way of natural recycling.

All of this allows us to fill six half-barrels each growing season with organic matter. The barrels are of the standard size (44 gallons) and made of plastic. We purchased three of such barrels and cut them in half (price around 50$CAN each). With a jig saw we made around 40 horizontal incisions around the perimeter of each half barrel in order to allow the air to circulate freely inside the container. Plastic containers have advantage of not rusting and being very durable therefore lasting forever. The barrels we use are of drinking water grade making sure that the plastic is not toxic and not leaching toxins into the compost. If you use steel barrels you can count on replacing them every three or four years because of corrosion.

How we compost? We are quite lazy people and do not like to think too much about our composting unless it is really necessary or when it is ready. Also to our disadvantage is the climate, with long freezing season, it is not helpful in making the composting a fast process. The goal is to get at least two and sometimes three half barrels fully filled with nice, beautiful, black compost ready to be spread on the soil with the fall rototilling.

If you read different brochures about how to compost they mention frequent turning over the organic mass in order to facilitate the process of composting. We found out that it is not necessary. We turn it only occasionally, every month or so, but we are doing it in a special way. We try to keep the compost in stages in the half-barrels, from left to right with increasing degree of turning into the final product. The organic mass does not decay equally. Some parts, coming from different sources, rot faster than others. When turning over we try to keep the less decomposed parts together by shifting the matter from one container to another with similar degree of decaying. The general rule is also to put less decomposed (and therefore dryer) matter at the bottom and cover this with more mature (heavier and wetter) mass. This trick accelerates the decomposition of the less mature matter.

Furthermore, to speed up compost creation, we use sometimes a 100% natural compost accelerator from the local gardening store. Another trick we use, is to sprinkle a dash or two of soil from the garden to introduce the right type of bacteria into the matter right from the beginning.

With this technique, even in our cold clime with its short warm season, year after year we get at least two half-barrels of fully matured compost just from what otherwise would fill the garbage bag and end up in the landfill.

Another thing to watch is to keep the right degree of moisture in the container. Because the fresh matter in early stages of decomposition tends to be dry at the top and the moisture tends to gather at the bottom while turning over, it is a very good idea to put the dry, previously top matter at the bottom and cover this with the wetter matter on top previously from the bottom. This technique makes the excess of water to drain to the bottom and provides necessary moisture to hasten the compost creation. Also the heavier and wetter layer on top squashes the dryer layer very quickly and makes room for the new matter that is being constantly added as the life goes on. In general, the degree of moisture of the composting matter should resemble a wet sponge, no more, no less.

While using parts of plants coming from the garden at the end of growing season it is really helpful to cut the stems into small pieces. It is not so labor intensive as it sounds. We use a machete on a wooden board and cut the stems (like tomato stems) and big leaves into small pieces by simple, quick chopping. The rule is: the smaller the organic pieces are the faster the compost creation occurs. The bacteria breaking up the organic matter have the job easier.

It is necessary to cover the half-barrels with pieces of plywood to keep the sunlight away. The sun’s direct radiation is a good bacteria killer and we want to create an optimal environment for the bacteria. Covers also keep the odor contained and save your neighbors any possible discomfort.