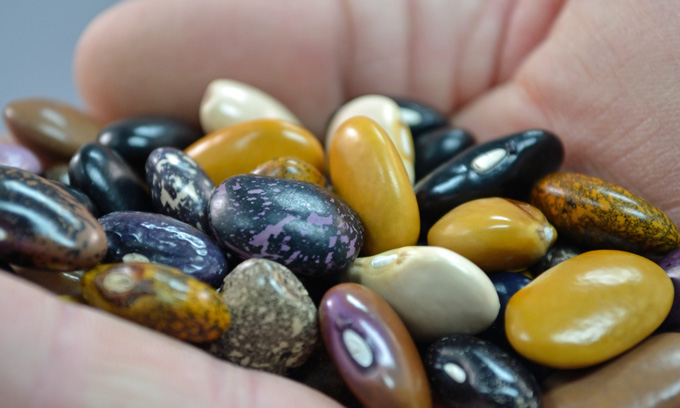 Behind The Scenes Of The Worlds Largest Seed Bank

Thank you for setting up the viewing of Seeds of Time. It will be interesting to see what Mr. Fowler and his crew will have to say, although I expect the documentary will be a pro-GMO argument.

“We’re going to pay a price if we don’t do the smart thing and help agriculture adapt.”  –Cary Fowler

The above statement came from the trailer for Seeds of Time.

I noticed in the advertisement for the seed saving expedition that you mentioned the Seed Savers Exchange.  I don’t know if you have had recent contact with this organization, but I have an awful lot of questions about what happened between the board of the organization and its founder,Kent Whealy, back in 2008.I do know that Kent Whealy was abruptly booted out of the organization by the Seed Savers Board of Directors in 2008.  The board took over the organization, rewrote the charter, and sent seeds to Svalbardwithout members permission or even their knowledge, at least initially.  The storm that ensued was all over the internet for a couple of years, and was very misunderstood – everyone thought it was just a spat between Kent and board member Amy Goldman.  Apparently no one realized just how deep the problem really ran.

There were a lot of people claiming that Kent was just a loony and a crybaby, because control of Seed Savers was wrested from him in such a rude manner.  But Kent raised some very valid points after his ouster that Amy and the board were never honest about.  One issue was the contract that was signed at the time the Seed Saver seeds were placed at Svalbard.

The contract is an agreement between the seed supplying organization and the United Nations, under something called The International Seed Treaty, which is administered by the UN’s Food and Agriculture Organization. This treaty is very carefully written….there is a section that states that “In consideration for the right to deposit samples of plant genetic resources in the Svalbard Global Seed Vault, the Depositor agrees to make available from their own stocks samples of accessions of the deposited plant genetic resources and associated available non-confidential information to other natural or legal persons….”

Of course, SSE’s members are not aware of this clause.  But it basically means that if you place seeds with Svalbard, it gives Svalbard scientists the right to raid your source stock for more of those seeds.  Another key point to the International Seed Treaty:  It guarantees any biotech corporation access to any seeds placed at the Svalbard vault.  This, unfortunately, is fact.  So Monsanto, Sygenta, Dupont and others can not only raid the seeds placed at the vault, they can place requests through Svalbard’s scientists for whatever interests them in the organization’s source seed stash, as well.

Which means Seed Savers two vaults in Iowa and Colorado are at risk not only for patenting, but confiscation.

Here is a copy of the agreement.  Take a look at Article 7, section 1:
http://www.nordgen.org/sgsv/files/sgsv/SGSV_Standard_Depositor_Agreement.pdf

In 2008, Seed Savers board contained several key players to all the big changes to the organization, including Cary Fowler (from Seeds of Time) and Amy Goldman, an extremely wealthy New Yorker (her dad was Sal Goldman of Goldman Sachs; Goldman and Fowler married in 2012). Amy basically stepped up and took over at one point, and Diane Whealy and the rest of the board sided with her (Kent and Diane split up in 2003 after more than 30 years of marriage).

Amy kicked Kent out of the organization and blocked him from accessing his seed and plant research that he had stored at Heritage Farm – he had everything stored at the Farm, about 35 years worth of research. The new Seed Savers wanted the rights to all of this “intellectual property”.  I’ll bet you can guess why (yes, it did involve patents and plant genetics, and the new Seed Savers organization making money from same).  Kent eventually sued Seed Savers; I don’t know what the outcome was or if the case is even still in play.

If you want to look at some of Kent’s letters to SSE members for some backstory, I found a couple of them on the Internet:

Along with the Depositors Agreement, there is another disconcerting issue:  the organizations that have founded Svalbard are always touting that the place is a fortress, that a nuclear blast could not take it out.  But on March 6, 2009, a 6.5 earthquake hit the sea bed right near Svalbard. It was the biggest earthquake Norway has experienced to date.  The scientists at the Norwegian Polar Institute sheepishly admitted that if the quake had actually hit the island itself, Svalbard could have been toast (even though the founders swore that Svalbard was “tectonically sound”).

Marjory, I cannot stress enough how right I think you are about the seed saving issue; how important it is for people to understand that they need to grow their own food, save their own seeds, and to trade locally.  We cannot depend exclusively on seed banks to save us; anything from Monsanto to earthquakes to floods or other natural or man-made disasters could befall them. Poor Iraq had a vault full of seeds, especially grains, varieties dating back to biblical times.  When the war hit, they had to ship a lot of what they had to Syria.  Now it has all been lost, except what they could ship to Svalbard. Same thing for Afghanistan.  But the USA’s biggest problem is Monsanto, who has already admitted that their goal is full control of the global food supply (“Global Food Dominance”).

And worse yet, there is the other huge issue looming on the horizon….clean, drinkable water. The UN is working hard to convince various governments that they should not build desalination plants for ocean water, claiming they are too expensive.  So there will be a major battle for control of clean, drinkable water sources. It is already happening now on a smaller scale: Texas vs Oklahoma over the Red River, Texas vs New Mexico over the Rio Grande, Us vs Canada over the Great Lakes (these are court cases going on NOW). Corporations are now colluding with city governments to dominate local water sources – Atlanta, Georgia is struggling with a water shortage because Coca-Cola is commandeering city water to bottle Dasani.  (Yes, Dasani is nothing but (supposedly purified) Atlanta tap water.  I’ll never buy Dasani again!).

Several corporations have admitted they are ready to get on the water takeover bandwagon.

Okay, I have ranted enough.  But it is important for people to wake up out of their “normalcy bias” and see what is happening.  People need to realize that you are not Chicken Little; the sky really is beginning to fall….  “Just Keep Swimming.”

Take care, Marjory, and thanks again.