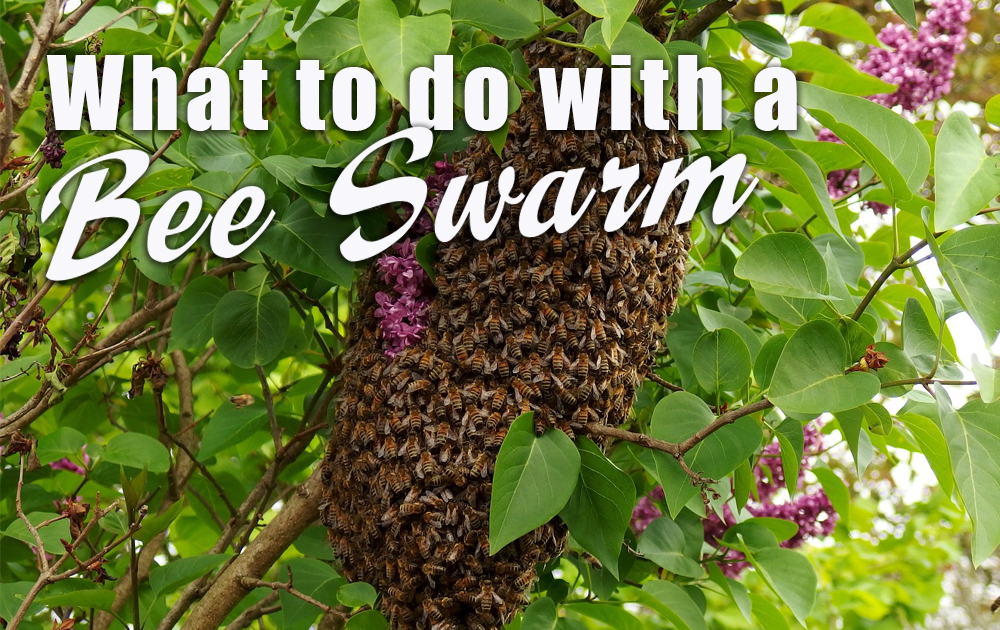 What To Do With A Bee Swarm!

Have you ever come across a bee swarm? It can be scary, exciting, and overwhelming. What do you do?

All of us at The Grow Network do various kinds of homesteading. Nikki, our Director of Customer Success, is … among other things … a beekeeper. A few weeks ago, she shared with us that the bees from one of her hives had swarmed. 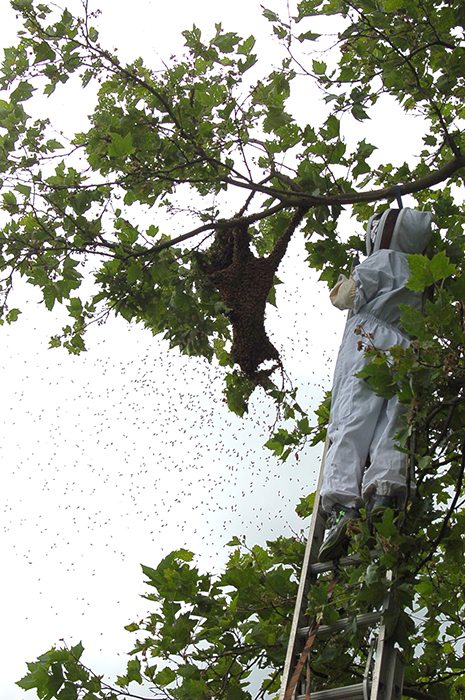 Those little brown specs are bees flying all over the place.

Nikki said, “We have 2 hives in the yard, and one decided it was going to swarm to the top of our sycamore tree in the backyard today.”

With the height of her tree and the size of the ladder, it was going to be quite an ordeal reaching them.

She decided to sacrifice her 13 year old, and sent him up the tree. She jokingly said, “I am officially okay with being shorter than my kids now!”

Her son had to rig the ladder with a tie down strap in the truck.

He used his body weight to hold the ladder straight. There wasn’t a branch to rest it on. Her other son took the cutters and took down the branches. They worked together on two separate branches.

There were so many bees that their weight broke one branch just before her son had a chance to fully cut through. This sent thousands of bees raining down on top of her.

“This hive has the potential to give us more than 100 pounds of honey this year, so we definitely didn’t want to see the bees relocate. Now, they are safe and sound in a new hive. We are re-queening the other two hives we have, and hoping to have 3 healthy and hard-working hives,” Nikki said.

It sounds like everyone is trying to settle down from the experience. 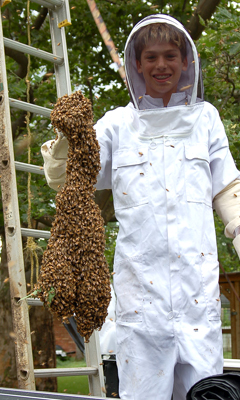 Nikki said she wishes she had seen Jacqueline Freeman’s presentation at the Home Grown Food Summit before she had a swarm of bees on her hands, but all worked out well.

What? You haven’t seen Jacqueline’s Home Grown Food Summit Presentation, “Gentle Ways to Collect Bee Swarms.”  She is so gentle with these little buzzing sweeties. You can still get in on this goodness, click here.

According to Jacqueline, it’s very natural for bees to swarm. Bees swarm because there is no more room for them. Their home is full of honey, pollen, and brood (baby bees).

The good thing is that healthy and successful colonies create more healthy Queens and new colonies, so it’s a good thing for a hive to swarm.

Before they swarm, the Queen is slimmed down. All of the bees have a feast and fill their bellies with honey. Two-thirds of the colony will suddenly fly into the air. One-third stays in the original hive and re-queen. Bees will only leave the hive if there are new queen cells in the hive.

The other reason that bees swarm is so the queen can increase her fertility, and sunlight does that for her.

When do bees swarm

Jacqueline says that a swarm is a big, bunch of chaos that typically takes flight in mid-spring, around mid-day. There needs to be a lot of pollen available. It also needs to be warm and windless. When they first leave the hive, they fly into the sky in a big, buzzing, whirling cloud of bees. Jacqueline’s amazed that they don’t bump into each other. The queen is hidden in the swarm, so she is well-protected.

Eventually, the bees land on some object, a branch, fence post, vine, or anything that looks like a good spot. The Queen directs the bees to gather and form a tight cluster on the object.  Jacqueline says it’s about the size of a football that is clasped to the branch. This is their resting spot for a few hours to a few days. Then, the scout bees roam around trying to find a suitable place to live.

Typically, bees that swarm are very gentle, according to Jacqueline. She said, in the hundreds of bee swarms that she has captured, she’s only been stung four times, and they were all her fault. A bee swarm is not likely to sting you.

How to catch a bee swarm

There is only one way to catch a bee swarm, according to Jacqueline…gently!

Here’s how she does it:

How to transfer a bee swarm to a new home

When you’re ready to transfer the bees, have your hive ready. Remove a couple of the frames to give you room. Hold the box over the new hive. Give the box a good shake so the swarm goes into their new home. Jacqueline shows you exactly how to do it in her video. Get access to it here.