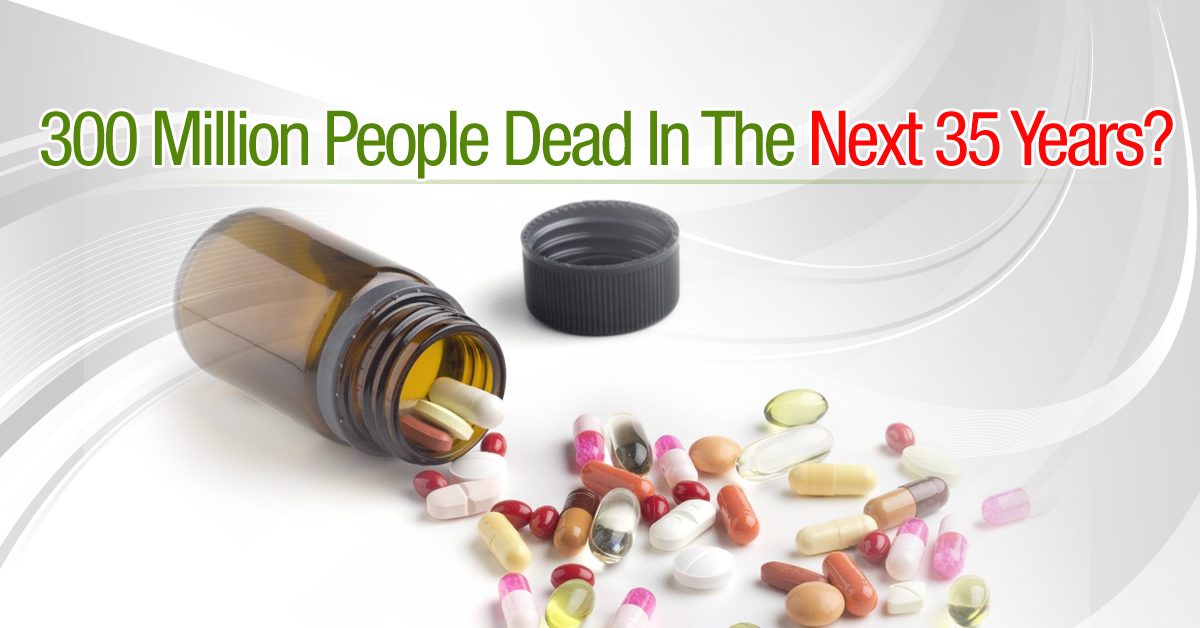 The Growing Threat of Antibiotic Resistance

The growing threat of antibiotic resistance and “superbugs” is an issue I’ve been raising the red flag about for years now.

And I know many of you already understand the threat is real.

But it can be hard to explain to friends and colleagues who I’ve noticed often roll their eyes and assume I must be exaggerating.

The antibiotic apocalypse?  The end of modern medicine?

“Impossible” is the reaction I often get.

So for those of you, like me, who are trying to educate friends and family on the gravity of the situation, I’ve put together this “news reel” highlighting some of the biggest headlines from a variety of sources over the last 18+ months.

(You can add any links I’ve missed in the comments below!)

And be sure to share this page with friends and family.

In The News: Antibiotic Resistance
Over The Last 18+ Months

Lack of Access to Antibiotics Is a Major Global Health Challenge
EurekAlert!, April 9, 2019

QUOTE: “Antibiotic resistance is an emerging global public health threat spurred by the overuse and misuse of antibiotics. While ‘overuse’ of antibiotics is widely accepted as a major health challenge, it is less well known that many people in low- and middle-income countries continue to die because they lack access to antibiotics. “

QUOTE: “A deadly fungal infection that is resistant to major antimicrobial medications is spreading globally, and scientists aren’t sure where it came from.”

QUOTE: “Each year at least 2 million Americans are infected with bacteria that cannot be treated with antibiotics, and at least 23,000 of these people die, according to the Centers for Disease Control. These bacteria can end up in our water, which is why we use disinfectants to kill or stop them from growing to treat both waste and drinking water.”

Revenge of the Bacteria: Why We’re Losing the War
New York Times, April 6, 2019

QUOTE: “Bacteria are rebelling. They’re turning the tide against antibiotics by outsmarting our wonder drugs. This video explores the surprising reasons.”

QUOTE: “As per the report published by Fior Markets, the global antibiotic resistance market is expected to grow from USD 8.21 Billion in 2017 to USD 13.16 Billion by 2025 at a CAGR of 6.20% during the forecast period from 2018-2025. . . .  Emergence of multi-drug resistant pathogens and high burden of antibiotic-resistant infections are major factors driving the market.”

QUOTE: “Fighting antibiotic resistance is a never-ending struggle. By the time a new antibiotic is tested and proven effective, the bacteria it’s meant to fight are often already developing resistance to it.

The World Health Organization calls antibiotic resistance ‘one of the biggest threats to global health, food security and development’ in the modern world. Superbugs like MRSA are predicted to kill 10 million people worldwide by 2050—more than cancer, traffic accidents, measles, cholera and tetanus combined.”

QUOTE: “One of the biggest studies of antibiotic use around the world has established that while antibiotic use in Britain has slowed, global consumption jumped by 65 per cent, to 34.8 billion daily doses between 2000 and 2015.”

“People who have travelled to areas of the world with high rates of antibiotic resistant bacteria such as South Asia and the Middle East are more likely to carry superbugs, a new study has found.”

The 26-Year-Old Who Inhaled a Virus to Fight an Antibiotic-Resistant Superbug
New York Post, February 26, 2019

QUOTE: “Pitting one germ against another may sound radical, but it’s a sign of a growing global crisis. Increasingly people are dying of infections that once were easy to treat because many common bugs have evolved to withstand multiple antibiotics. Some, dubbed ‘nightmare bacteria,’ are untreatable. Now scientists are racing to find novel alternatives to traditional antibiotics, a hunt that is uncovering unusual ways to counter infection, in unusual places.”

QUOTE: “Scientists at Swansea University Medical School in the United Kingdom drew this conclusion after studying samples of Irish soil with a long healing tradition. They found that the soil contained a previously unknown strain of Streptomyces bacteria that has remarkable medicinal properties. Tests revealed that the strain was able to stop the growth of MRSA and three other superbugs that can spread in hospitals.”

QUOTE: “The rise of antibiotic-resistant microbes might be reason enough to trade that bunker filled with a year’s worth of cocktail weenies for a ‘boy in the plastic bubble’ containment system to save yourself from the next deadly infection outbreak. And where there’s potentially catastrophic danger to the survival of the human race, there’s money to be made. Let’s dive into the world of superbugs.”

Pharmaceutical Companies Are Backing Away From a Growing Threat That Could Kill 10 Million People a Year by 2050
-Business Insider, July 21, 2018

QUOTE: “Just two years after Novartis announced it would embrace the challenge of searching for cures for life-threatening infections known as superbugs, the drugmaker said last week it would exit antibacterial and antiviral research. Novartis’ retreat follows a growing trend of big pharmaceutical companies—including AstraZeneca, Sanofi, and Allergan—that are exiting from this type of research because of a lack of profit.”

QUOTE: “Antibiotic resistance has become a major threat to public health worldwide, and the primary cause for this man-made epidemic is the widespread misuse of antibiotics—drugs used to combat bacterial infections in humans and animals. Over the decades, antibiotics have been widely overprescribed for infections that don’t respond well, or at all, to these drugs.”

QUOTE: We are at risk of entering a post-antibiotic era. Each year since 2013, a major global institution—including the World Economic Forum, the World Health Organization and the United Nations General Assembly—has issued this grave warning to the world. . . . In response, we really only have two options. One is to gather more arrows in our quiver—by discovering new antibiotics to which microbes like bacteria are not currently resistant. The second is to manage our current arsenal of drugs better so that they remain effective for as long as possible. The key to doing this is to reduce the global burden of antibiotic resistance by decreasing the quantity of drugs we use.”

QUOTE: “Carbapenem resistance often shows up in bacteria in the Enterobacteriaceae family, which includes common gut pathogens such as E. coli and Klebsiella. These carbapenem-resistant Enterobacteriaceae (CRE) burst onto the clinical scene starting in the early 2000s and they’ve tended to carry resistance to many or nearly all other antibiotics, in addition to carbapenems. In fact, CRE cause dreadful infections with mortality rates as high as 50 percent—aka, nightmare cases, as the CDC likes to call them. For this reason, CRE are considered among the biggest microbial threats by the CDC and the World Health Organization.”

QUOTE: “Researchers report that nationwide testing uncovered 221 instances of unusual resistance in the so-called ”nightmare bacteria’—the dangerous germ carbapenem-resistant Enterobacteriaceae (CRE), which can kill if it gets into the bloodstream, urinary tract or lungs.

“For the first time, researchers have discovered strains of a deadly, multidrug-resistant bacterium that uses a cryptic method to also evade colistin, an antibiotic used as a last-resort treatment.”

QUOTE: “The quest for guilt-free, ‘healthier’ sugar options has had a serious, unintended consequence—the proliferation of two highly virulent superbugs, a study published in the journal Nature claims. The seemingly innocuous, naturally occurring sugar trehalose, a popular sweetener in nutritional drinks and energy products, could have allowed certain strains of the Clostridium difficile bacteria to become much more virulent than they were before, according to the study.”

Stopping the Rise of Superbugs by Making Them Fight for Food
The Atlantic, December 11, 2017

QUOTE:  “The history of antibiotics is a history of running in place. Two years after the first of these life-saving drugs—penicillin—was mass-produced, bacteria that resisted the drug became widespread, too.

With grim inevitability, the same events have unfolded for every other drug. Every time scientists identify a new substance that can hold back the tide of infectious disease, resistant superbugs surge over that barrier in a matter of years.”

QUOTE: “A systematic review . . . found that interventions that restrict antibiotic use in food-producing animals reduced antibiotic-resistant bacteria in these animals by up to 39%. This research directly informed the development of WHO’s new guidelines.

WHO strongly recommends an overall reduction in the use of all classes of medically important antibiotics in food-producing animals, including complete restriction of these antibiotics for growth promotion and disease prevention without diagnosis. Healthy animals should only receive antibiotics to prevent disease if it has been diagnosed in other animals in the same flock, herd, or fish population.”