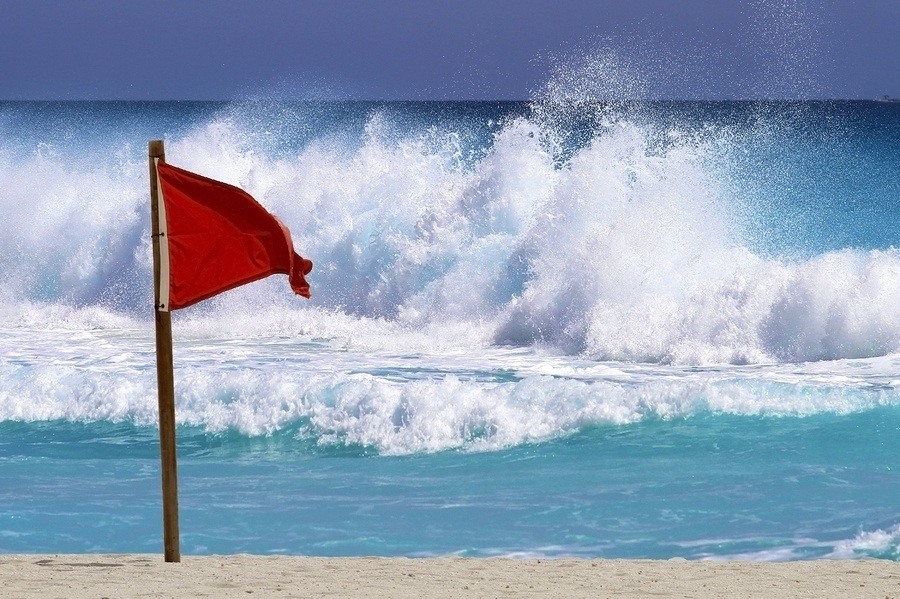 5 Red Flags of Imminent Collapse: Be Aware of the Warning Signs

These indicators will give you anywhere from a few days to a few months of warning that things are about to change drastically.

1) Interest rates on US Treasuries go up steeply, and/or suddenly

The definition of ‘defaulting’ on it’s debt means the US Gov’t isn’t able to pay the interest on the almost $16 trillion it owes. Currently interest rates are at all-time lows – as many homeowners are enjoying by re-financing their homes at lower rates. Interest on the debt is currently the smaller of the four biggest expenses the US Gov’t has.  As interest rates rise, the interest expense will get bigger – and this will be very difficult for a Gov’t that is already deficit spending way beyond its means.

You want to keep an eye on the current rates on Treasuries for two reasons:

a) Increasing rates will require a debt laden Gov’t to barrow more and will accelerate inflation and the date of collapse. This is a 6-12 month red flag. As of today, rates are slowly rising although they are still very low.

b) A sudden and sustained spike in the interest rates indicates that there are fewer buyers of US debt. Without the ability to barrow more money or rollover the existing debt the US Gov’t will have to shut down or do desperate things like stealing from retirement plans or citizens bank accounts. Get your money out of the banks or markets immediately. This is a very severe red flag indicating only weeks before major financial crisis and economic collapse.

Here are two sites for monitoring Treasury interest rates. The first is my personal favorite.   http://www.bankrate.com/rates/interest-rates/treasury.aspx   (shows this week, month ago, year ago on short and long-term debt)

Essentially everything on this planet depends on oil; food, transportation, heating & cooling, and basically every consumer item you can think of. The world economy cannot sustain high prices of oil without collapsing. We saw that very clearly in 2008 when the price of oil hit a high of $146/barrel in June, and by September of that year we were in a full blown financial crisis.

For the past several years, oil has been trading around the $90/barrel price.  It is currently at about $102.  While not yet in the danger zone, we need to watch this one more closely.

If the price of light sweet crude oil stays above $120/barrel then you have only a few months before a major financial crisis unfolds. The financial crisis of 2008 was ‘solved’ by atrocious US Gov’t spending of more than a trillion dollars/year. That particular solution won’t be available to use in the next crisis. Does ‘the powers that be’ have another card up their sleeve for the next financial crisis? I don’t know, but I assume the answer is “no”.

I keep an eye on crude oil prices at the Kitco.com site. Look on the left sidebar a bit lower on the page (I like to use the Kitco website as it has a good summary of other prices as gold, silver, US dollar index, etc.).:

There is a direct correlation between rioting and the cost of food. It is a very simple principle – when people can’t afford to eat, they revolt. One recent example is in 2010 food prices soared and reached a peak in February of 2011. The high cost of food is attributed to the upset that sparked a series of revolutions throughout the Arab world starting when Mohamed Bouazizi set himself on fire in Tunisia in December 2010.

Those revolutions were predictable. Here is a detailed article with research and mathematical models of how food prices are related to rioting: http://www.growyourowngroceries.org/the-cause-of-riots-and-the-price-of-food/

The level of hunger and desperation in the Untied States has increased in recent years indicated by the increasing numbers of people on food stamps and increasing strain on local food banks.  According to www.FeedingAmerica.org 1 in 6 Americans are dealing with hunger…. We are approaching conditions for civil unrest and revolt here in the Untied States.

The cost of food can rise for many reasons – massive crop failures, inflation, or market manipulation.

The simplest way to track increasing food costs is the UN FAO Food Price Index.  The index had an all time high in Feb. 2011 at 237 and a rough guide is that when the index gets within 10% of the peak (213 is with 10%) then you should be on alert and keeping an eye on food prices.    It is currently below the threshold at 209.3, but it is close.   This current level bears keeping a close eye on.

If the index crosses into the 240’s and stays above that level, then the probability is very high you only have weeks or possibly months before widespread violence will break out world-wide.

Here is a link to the UN’s website where the food price index is available (Thanks to Jim Davis for the updated link):

Approximately 30% of all US oil refining is done in a small area called Texas City – which is also right near Houston.  A category 5 hurricane will certainly cripple or destroy this much-needed fuel production.  But even worse than the destruction of the refineries would be the loss of the hundreds of specialty machine shops, high-tech firms, research centers, and labs that are located in Houston.  Without this vast support network, much of the capability for repairing the refineries will be lost.

Here is a list of oil refineries in the US if that helps.  list of US refineries by state

A category 5 hurricane hitting these refineries will cripple diesel production. Without diesel, the vast just-in-time trucking system will come to a crawl.  Food, fuel, and medicine are the three most crucial items trucked around in this county and all of these deliveries will be in very limited supply. For example, throughout most of America there is only about 4 days worth of food in inventory in the grocery stores. Everything else we commonly depend on such as delivery of medicines will also come to a crawl.  Prices will skyrocket.

The US Military is a very large user of diesel, and will certainly have priority for usage in any kind of crisis.

Red Flag: if a category 5 hurricane hits the Houston area, you’ve only got days before rampant price increases and martial law breaks out.

EMP stands for electro-magnetic pulse. This is a strong burst of energy that has the net effect of destroying the electrical power grid. An EMP pulse can either be man made (i.e. terrorist induced)  by exploding nuclear device(s) in the atmosphere above the US.  Or such a pulse could occur naturally as an intense solar flare from the sun.

The net result is the same and there are studies by the US Gov’t that estimate the loss of human life to be 90% within a six month period.

If anytime the electrical power goes out, the first thing to do is determine the extent of the outage. Hopefully, it is simply a neighborhood, or perhaps city-wide, outage that is a temporary inconvenience.

Try using your phone to call around to see who else has been affected. If your phone works, most likely the entire system has not been destroyed, although there is a small possibility the phone system might work for a while with the backup power they have. Try using other battery operated electrical devices to see if they function. Especially radios – perhaps the one in your car. If you are getting radios stations with normal programming, then the disturbance is only minor and you can relax. If your radio doesn’t work at all, or you can’t get any radio stations across the dial, the condition is very grave. Keeping an AM radio with charged batteries in a ‘Faraday cage’ that protects the electronics from EMP pulse is a good idea. AM radio signals can travel extremely far and checking transmission from AM radio stations at night is a way of determining the range of destruction.

This protocol will give you awareness of the situation hours and days before those around you grasp the full extent of what is going on. This is hopefully a scenario that never happens as this will truly be the end of the world as you knew it.

Marjory Wildcraft is the author of the book “7 Shortcuts To Finding The Perfect Survival Retreat”.  Click here to buy the book;  http://www.RelocationShortcuts.com

Marjory focuses on offering education and information for skills that will be critical in the event of major collapse such as food, medicine, and defense.  She is the creator of the video set “Grow Your Own Groceries” which teaches you how to grow food in a grid down situation.  go to www.GrowYourOwnGroceries.com for more information on the video set.