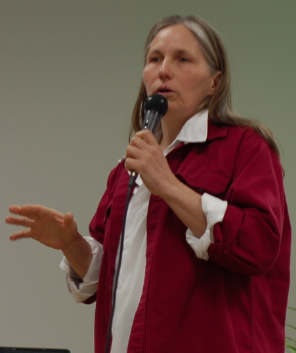 PRWeb:  Austin, TX, May 7, 2013 – ‘Preppers’ is a term given to the growing numbers of people who are preparing for disasters and disruptions of all sorts.  The prepper movement includes a wide range of people from those who are ready to handle a few days disruption to those who are getting ready for TEOTWAWKI (the end of the world as we know it).

Of all the big scenarios for collapse, what do preppers consider most likely to occur?

A recent survey with 1,840 prepper respondents showed an overwhelming 76% believe

the most likely big disaster is Economic Collapse.  “Given the recent concerns with a US Fiscal Cliff, the banking meltdown in Europe, and the unsustainable accumulation of debt by governments around the world, this response is not so surprising” says Marjory Wildcraft, a leader in the survival and preparedness industry.  Wildcraft has been described as the ‘Martha Stewart of self-reliance’.  She Is a regular guest on national radio and television shows and was recently featured as an expert in sustainable living on National Geographic’s hit series “Doomsday Preppers”.  Wildcraft is an author of several books, but is best known for her video series Grow Your Own Groceries (www.GrowYourOwnGroceries.com/dvd), which is a crash course on growing food that is used by homesteaders, survivalists, universities, and missionary organizations.

Jack Spirko, host of the popular  Survival Podcast  (www.TheSurvivalPodcast.com) also agrees that much of his audience sees the financial situation as the biggest concern among the many possibilities.  Spirko is quoted as saying “economic collapse is a matter of when, not if”.

To meet the growing demand for information and skills related to self-reliance and sustainable living, Wildcraft has created an online information center at www.GrowYourOwnGroceries.org with free resources on

– How To Find The Perfect Survival Retreat

– Guns for Women and Beginners

– Investments & Small Businesses That Succeed In Times Of Crisis

– Making Your Own Medicine

– Healthcare When There Is No Doctor

Why the emphasis on growing your own groceries?  “Regardless of the collapse scenario, being able to feed your family will be your biggest concern,” says Wildcraft.  “It is well known that there are only about 4 days worth of food supplies in the grocery stores, and your food travels to you an average of 1500 miles.  Any event that interrupts the just-in-time trucking system will mean people will be looking for food as a first priority.  Of all the skills you need to survive, growing food is one of the most challenging”.

Wildcraft’s crash course video set Grow Your Own Groceries is rapidly becoming the standard video training tool and reference source for people who want to learn how to grow food and take control of their food supply.

The principles in the DVD training course are universal and are applicable to everyone living anywhere, regardless of climate. People who live in apartments can also grow their own food.

Wildcraft’s new site at www.GrowYourOwnGroceries.org offers much more than simply growing food and is quickly becoming the ‘go to’ source for information for people new to prepping.  There is a large selection of videos, articles, and podcasts that provide useful information that is easy to understand.  “We focus on practical information delivered with a bit of humor and lots of inspiration,” says Wildcraft, who noted that survival and preparedness used to be associated with fear tactics and gloom and doom.  “I take the perspective that yes, change is coming – now how do we make the best of it?” says Wildcraft.

New preppers can get a series of impactful videos delivered to their inbox every week for free when they subscribe to Wildcraft’s “Getting Started Kit” at www.GrowYourOwnGroceries.org.  You can also get a free report titled “How Much Land Do You Need To Grow All Of The Food You Want”.

“Marjory Wildcraft’s emails are so well written and so useful, I print them out and keep them in a binder,” says Jeff Deere of Dallas, Texas.

Creating the www.GrowYourOwnGroceries.org site is part of a mission for Wildcraft, who is passionate about sustainable living and self-reliance.  Wildcraft points out that homegrown food on every table is a solution to so many problems we are collectively facing – including economic collapse.

For information, go to www.GrowYourOwnGroceries.org