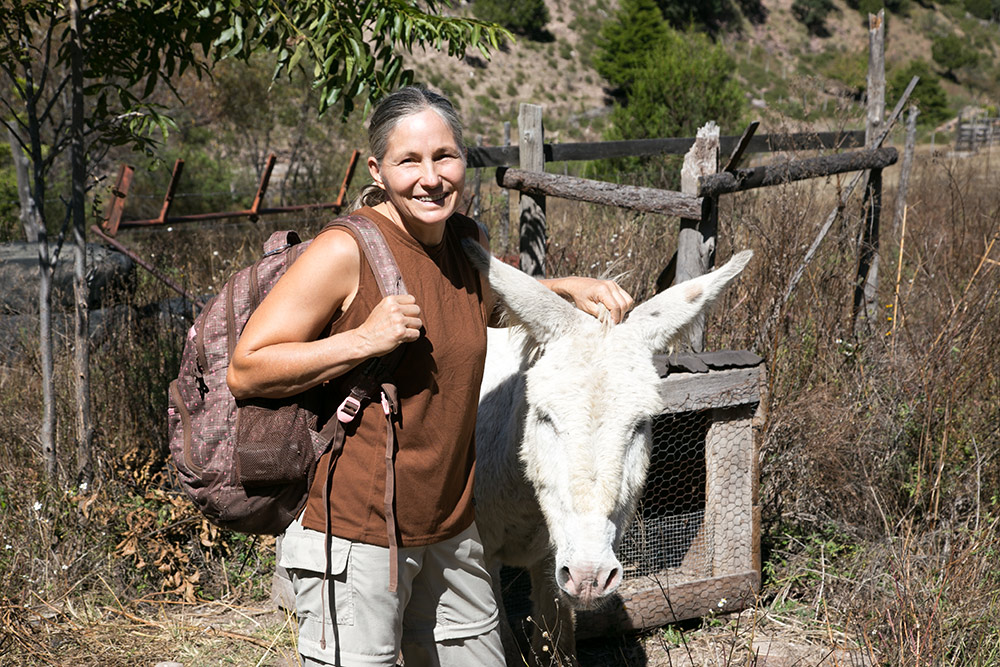 Extreme Agri-Tourism: Off the Grid with the Tarahumara Indians, Chapter 7

Don’t Ever Do This When Traveling In Strange Territory

Early the next morning Dave came into my room and tapped the foot of my sleeping bag. “Hey you want to go on a hike?” Dave asked. After all the planes, trains, and buses the chance to get some exercise was just what I wanted. Plus, I hadn’t slept that well and I was wide awake anyway. So I enthusiastically said, “yes!”

Anthony, Pedro, and I followed Dave up a narrow mountain trail. On the way we met up with a Tarahumara neighbor named Bernadino. I would end up spending a lot of time with Bernadino and his warm family discussing how they grew and prepared food.

After about 20 or 30 minutes, we came upon a large comfortable cave where Bernadino and his family had lived until recently (when they moved into the house they now occupied). In the 2016 Home Grown Food Summit, there is a fascinating full-length interview where Dave tells about Bernadino’s background and how the two of them met. Click here to get to the Home Grown Food Summit.

Marjory, Dave, and Bernadino in the cave where Bernadino used to live.

By the time we got back down to the house for breakfast, the sun was up and we could tell it was going to be a warm day. After we had eaten we would start our first class on how to make tortillas with Lola. Life moves at a more leisurely pace in Mexico and by the time our “class” was actually going to start, it had already gotten downright hot. I slipped off for a quick second to change into some cut-offs and felt much more comfortable.

First off we had to shell the kernels of corn off the cobs. Then the corn was put in a pot with water. Powdered lime is added to the pot and it’s put on the stove to simmer for about an hour. This is a process called nixtamalization. It is a process that makes the nutrients in the corn more bio-available when you eat it.

Shelling corn is the first step in making tortillas and everyone helped out.

I have always been fascinated by nixtamalization. How humans ever discovered this process is quite a mystery to me. It’s an extremely important process to anyone who’s interested in being self-reliant and relying on corn as a staple. All of the indigenous people throughout the Americas that grow corn know how to nixtamalize corn and do it regularly.

How did the indigenous peoples know to nixtamalize their corn? Where did they learn the process? How could they possibly have discovered it? The process is not intuitively obvious. If you’d like to see for yourself how it’s done, there will be a free presentation airing at the 2016 homegrown food summit which you can sign up for here by clicking this link: 2016 Home Grown Food Summit.

Anthony films Lola as she washes the nixtamalized corn in the stream by the house.

One of the interesting things about our trip is that all these “classes” we were taking didn’t really affect daily Tarahumara life that much. Nixtamalizing corn and making tortillas were things the women did every day. Having us around to ask questions and do a bit of filming didn’t really interfere with their normal schedule.

How the Tarahumara Manage Their Drinking Water

Once the pot of corn was bubbling away and the stove was piled with wood, Lola said we had about an hour. She needed to go get drinking water. So we all went to go with her. Neither Anthony nor I have a lot of experience traveling in Mexico. But we had heard about “Montezuma’s revenge.” And both of us were being very careful. If the water wasn’t boiled, then we were treating it with iodine.

Anthony and Marjory treated most of their drinking water with iodine drops to prevent Montazuma’s revenge.

Lola’s house was only about 30 yards from a stream, and come to think of it, so were all of the rural Tarahumara homesteads that we would visit. But none of them drank from the streams that were right next to their houses. All of them got their drinking water from cleaner sources that were 500 to 1,000 yards away, and usually higher up.

So at Lola’s home, once or twice a day someone in the family would take a 5 gallon jug and go up and get water from the stream.

The house water supply is jugs of water brought in from a nearby stream.

“When we need to carry more water over longer distances, we use “La Pipa,” Lola told me. La pipa means “the pipe” in Spanish.

But “La Pipa” turned out to be the name of the white donkey that had been hanging around the yard. It was a joke in a second way as well, in that because of her white color, the donkey also looked like a piece of PVC pipe (the common plumbing pipe which is usually white).

“Is this area fenced?” I asked, wondering about how they cared for the donkey. No, it wasn’t. La Pipa was free to go wherever she wanted. She was hanging around the house these days because there were still some greens growing in the yard, the apple orchard still had fruit, and there was the possibility of corn husks coming from the house.

They fully expected her to wander off eventually. When they needed her to carry stuff, or for plowing, they would simply ask their neighbors, “Have you seen my donkey?” and eventually she would be found.

“Why would she ever let you harness her again?” I asked. Because they would feed her corn or other grains when she worked with them. Otherwise they didn’t have to worry about her. It was a good arrangement for everyone.

But La Pipa wasn’t used for the daily household water, so without La Pipa’s help we headed up to the stream for drinking water.

While getting drinking water for the house Lola gets her grandson Diego a drink at the water hole.

It was while we were up there getting water that Dave dropped a bombshell on me.

He came up to me and said, “You know, Marjory, you are really quite a babe.”

I am not sure how long it took me to respond.

“Uh, that’s nice of you to say…” I stammered, not quite believing him and certainly not knowing how to respond in this situation.

“Oh, I really mean it!” Dave exclaimed, “you are really an attractive woman.”

Now, of course every woman on the planet would enjoy being called a babe. Although, personally, I think at my age I’m well past that description. But I will confess that about 1% of me was just thrilled.

My internal organs started screeching. Here I was out in the middle of God knows where in Mexico, and we were planning to go ever further off the beaten path. We were only a few days in to what should be about another week of traveling. I spoke only a little Spanish and my Tarahumara was zilch.

No matter where this conversation was going, it couldn’t be good.

This article is Chapter 7 in the series “Extreme Agri-Tourism: Off the Grid with the Tarhumara Indians.” You can read the rest of the series here: