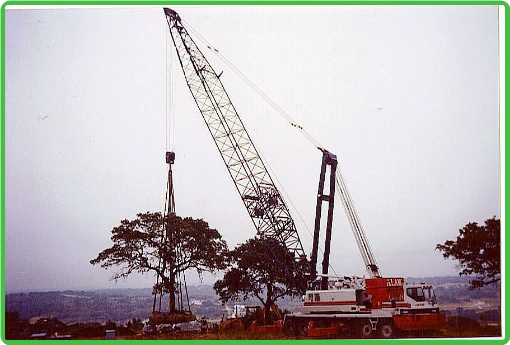 Can You Guess How Big That Taproot Was?

Everything in Texas is bigger – it’s true.

Last weekend I went to my husband’s 40th High School reunion. I was curious to see what the young faces in the yearbooks grew into.

I wondered if any of my husband’s old girlfriends would be there.

And, I was expecting to be a little bored.

I couldn’t have been more wrong.

Another spouse, Armand and I get to talking and Armand says, “hey, you know what I did last weekend? I moved a huge old pecan tree”.

I gave him a look that let him know I knew he was insane. “You know its August don’t you?”

That was actually a stupid question on my part as even in the coldest air conditioned room in Texas, the searing 102 on the other side of the wall still gets to you.

Transplanting is traumatic to plants at any time, and this was the worst possible season.

A construction scheduling thing was triumphing over natural rhythms and the tree was in the way. Turns out that Armand and his brother specialize in saving large old trees. The landowner could afford to move the tree if it could be done. Or it would be cut down.

First they heavily pruned the tree – cutting it back to almost half its original size. Then they used backhoes to dig all around it. The machines can only do so much, and the digging under the tree was done by hand with shovels.

The tree was being held in place and upright, using chains and a huge crane. The crane used three semi trucks for anchors.

At some point you can no longer use shovels and the final undercutting was done by sawing with a chain pulled on either end by coordinated backhoes. So the hole had to be huge; big enough for not only digging up the root ball, but also providing room for the machines doing the sawing with chain.

As they went, they used numerous cables, straps, and wrapping to completely enclose the root ball so it would not disintegrate when the crane lifted the entire thing up.

Armand was showing me some photos of all this on his cell phone.

“So guess how big the tap root was on that tree?”.

I laughed and asked Armand how much money he had put into the pool on the answer to that.

And then I brought up the pivotal question “what kind of soils was the tree growing in?”

Which is basically a form of rock.

So how big do you think the taproot was? Put you guess in the comments box and after we’ve gotten a bunch of guesses I’ll post the answer.

Here is a clue:

Yeah, everything in Texas is bigger.

PS:  Click here to see photos Armand sent me of this actual tree being moved.