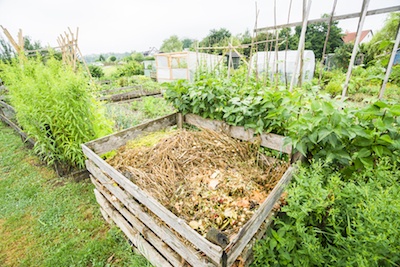 The drivers rarely ever get it in the right spot no matter how much staking, outlining, and directions they get.  It always resorts to arm waving and shouting over the huge noise of the powerful machine.

You can almost see these guys when they were kids operating Tonka trucks, but now the toys are bigger.  The level is pulled and the bed rises slowly dumping out the contents: pure black gold.

Over the years I’ve been dismayed at the amount of compost I buy.  My soil is essentially pure sand.  Think of the last time you were on that sunny beach, with a cold beer in your hand, and not a care in the world (like the song says).  And now imagine trying to grow something in that.  You suddenly get a lot more cares!

The conclusion I have come to really develop soil fertility is the use of cover cropping.  Cover cropping is where you grow plants just with the intent of cutting them down to compost in place.  Some plants like rye grass for example, have huge root systems so not only do you get the benefit of the organic matter from the top, but also the whole root system that decomposes below ground.  Plus, some of the cover crops you can eat; like oats or rye for example.

Cover crops are also great in clay soils too.  I was over at Jack Spirko’s place recently and he showed me an area that had been about hard as a rock.  Jack planted (well, more like broadcast) a cover crop of daikon radishes which are famous for being really tough plants – and sure enough, the radishes had been breaking through and opening up the ground and allowing things to grow where little had grown before.

I’ve been growing cover crops for quite a few years now and I have to say it really is the most practical way to build soil.  And it is a heck of a lot easier and cheaper than buying it.  I’ve had some good success, but I wanted to take my skill to a higher level.

So in my morning quiet time I asked for guidance, and sure enough a little while later Cindy Conors video set came to my attention.

Cindy’s video is called “Cover Crops and Compost Crops In Your Garden” and I was blown away by the quality of information in Cindy’s video.  This woman is truly a master at growing her fertility.  I called Cindy to talk with her about the video.  She said that yes, on occasion, she does soil testing and if she needs an element or two, she adds it.  But overall she never has to buy compost and buying the odd soil amendment is getting rarer and rarer.

Cindy has the ability to grow food forever regardless of what happens economically.  That is really cool.

But it gets even better.  Cindy doesn’t remove most of her cover crops in her garden – she just cuts them in place and it turns out to be a fantastic mulch.  Cindy told me that a good thick cover crop mulch cuts down about 90% of the weeding.

Cindy’s video takes you through an entire year of her gardening cycle.  The video quality is quite good – and the content is amazing.  The video is quite rich in info and something I’ll be watching over and over again.  Cindy also has another video that helps you plan the cycles and a book on growing food sustainably.  I haven’t dipped into those yet, but based on what I’ve seen so far, I am sure they are excellent.

You can pick up a copy of Cindy’s video here:  http://www.homeplaceearth.com/3.html

And if you would like to see what Cindy’s garden looks like, check out this article Cindy wrote on using trellises to shade your garden paths.
http://growyourowngroceries.org/trellis-your-garden-paths/

Do you grow cover crops?  Put a comment down below – I would love to hear from you.